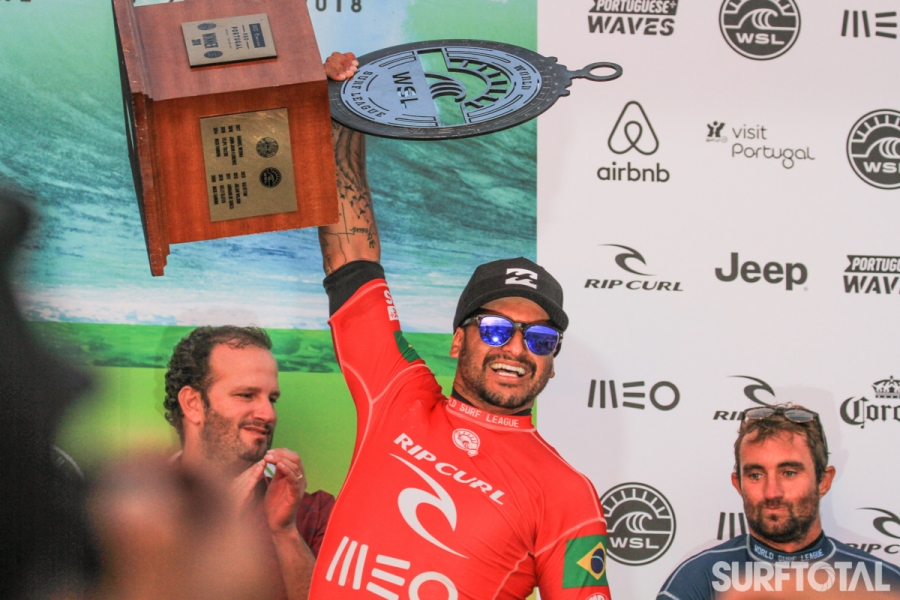 Stop No. 10 of 11 on the World Surf League (WSL) Championship Tour (CT), over Joan Duru (FRA) in a Final held in clean three-to-four foot (1 - 1.2 metre) surf at the iconic Supertubos beach break. Tens of thousands of fans flocked the beach and dunes of Supertubos to support the athletes and enjoy high-performance surfing at one of Europe’s finest surfing spots. The electric vibe peaked every time surfers took their act to the air and fans lit up in loud cheers.

“This is crazy, I can’t believe it,” Ferreira said. “In my first year I got a second here, so now I’ve got my first win here. Thank you Portugal and thank you to everyone on the beach and my family and friends. I’m so excited. That was a crazy year for me, I got a couple of wins and some bad results, but I’m just living my dream and this is the best feeling.”

World No. 4 Ferreira claimed his third event victory of the season after winning the Rip Curl Pro Bells Beach and the Corona Bali Protected earlier this season. Despite being inconsistent with six early losses, the 24-year-old is in his best-ever season on the Championship Tour and will be a strong contender for the World Title race in years to come. In an incredible air show, Ferreira defeated compatriot Gabriel Medina (BRA) in the Semifinals and effectively sent the World Title race to Hawaii by depriving Medina of a win in Portugal. 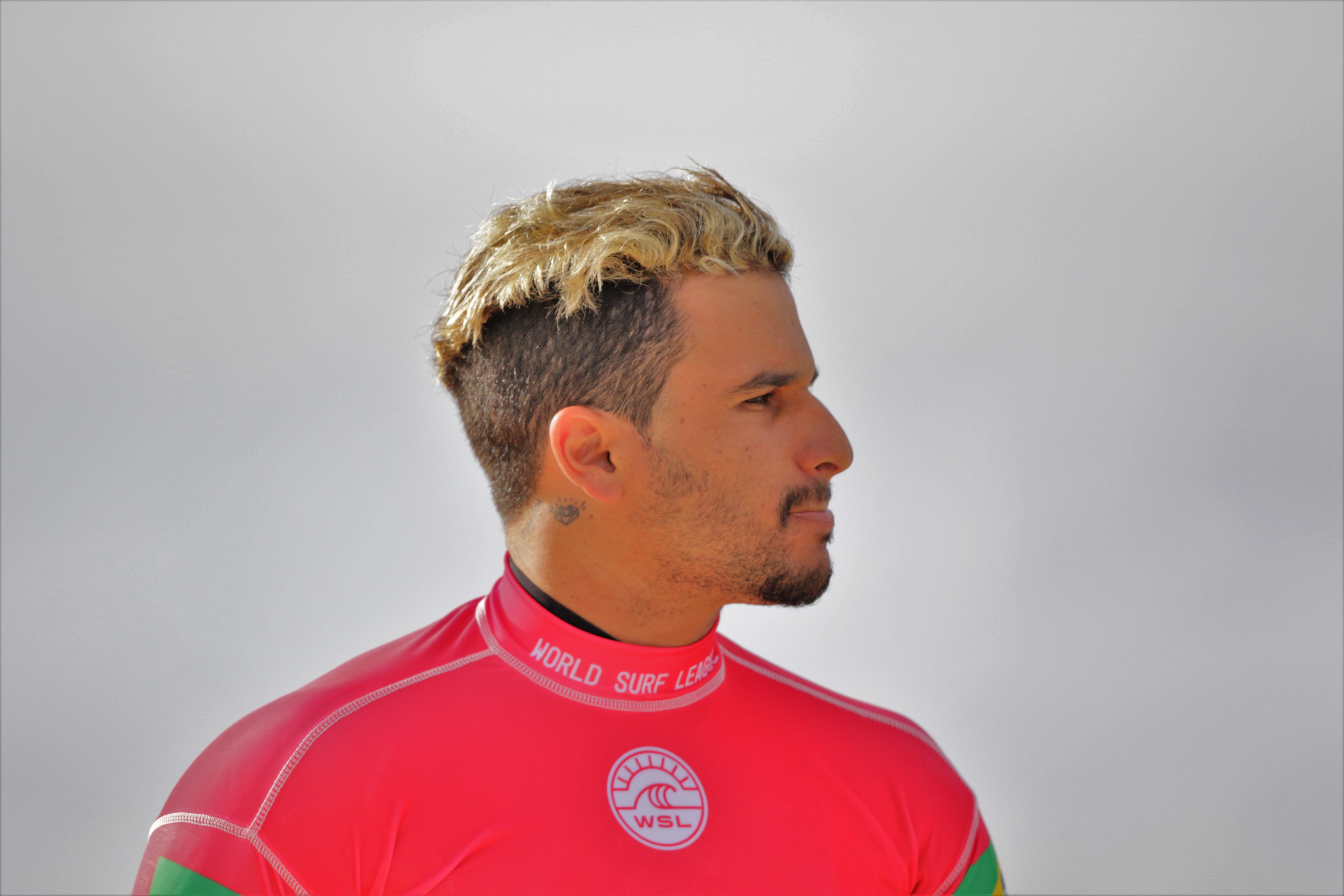 “I’m still learning and enjoying myself,” Ferreira added. “This is the best job in the world!”

Duru pulled the trigger first in the Final with a combination of two critical backhand turns for a 7.00 (out of 10) to apply pressure on Ferreira early on. But the Brasilian just went to what he does best and landed two back-to-back forehand rotations for a 7.43 and an excellent 8.50 to turn the situation mid-heat. The ocean, unfortunately, did not provide many more opportunities for Duru and the result remained unchanged for the remainder of the Final, giving Ferreira the win.

World No. 33 on the Jeep Leaderboard coming into this event, Duru posted with this runner-up result, his career-highest placing and will rocket up ten spots in the rankings to No. 23, to give himself a strong shot at re-qualifying in the final event of the year in Hawaii (only the Top 22 male surfers will requalify from the Jeep Leaderboard). Duru was the event’s giant-killer, having previously eliminated Filipe Toledo (BRA) in Round 3, Julian Wilson (AUS) in the Quarters and Owen Wright (AUS) in the Semifinals.

“I’m so stoked and I didn’t have many results before,” Duru said. “I just came here to have fun and make some heats so I’m really stoked to be here and it’s amazing. I really didn’t think about requalification and rankings, I just wanted to surf and that’s it. I’m stoked I had my family, my grandparents and my mom here with me, and thanks to all my friends for the support.”

In the first Semifinal, Ferreira got a quick start with a 7.17 in the early minutes of his exchange with Medina, launching what would become an incredible air show, with a good forehand rotation. Medina did not wait long to reply with a similar wave for a 6.83 and later upgraded to a 7.90 with an alley-oop to take the lead. Both surfers continued to showcase the different variations of their aerial repertoire and Medina seemed in control of the heat. But, out of nowhere, Ferreira pulled the biggest maneuver of the whole event for an incredible 9.30 to upset the 2014 World Champion and advance into the Final.

With his equal 3rd result in Peniche, Medina further extended his pole position on the Jeep Leaderboard, finishing ahead of his two rivals in the World Title Race, Toledo and Wilson. Coming off of four consecutive excellent results, Medina is undoubtedly the form surfer of the back half of the 2018 season and seems poised to claim a second World Title as the year winds up.

“It was a good heat against Italo as always,” Medina said. “He’s a good friend of mine and he deserved that one. I’m happy with my performance. I know I did my best and now my focus is on Pipe. We didn’t hassle each other, we knew it was going to be an air show. I come from two wins and two thirds so I’m happy with my performance and Pipe is a wave that I like so now I’ll focus on that.” 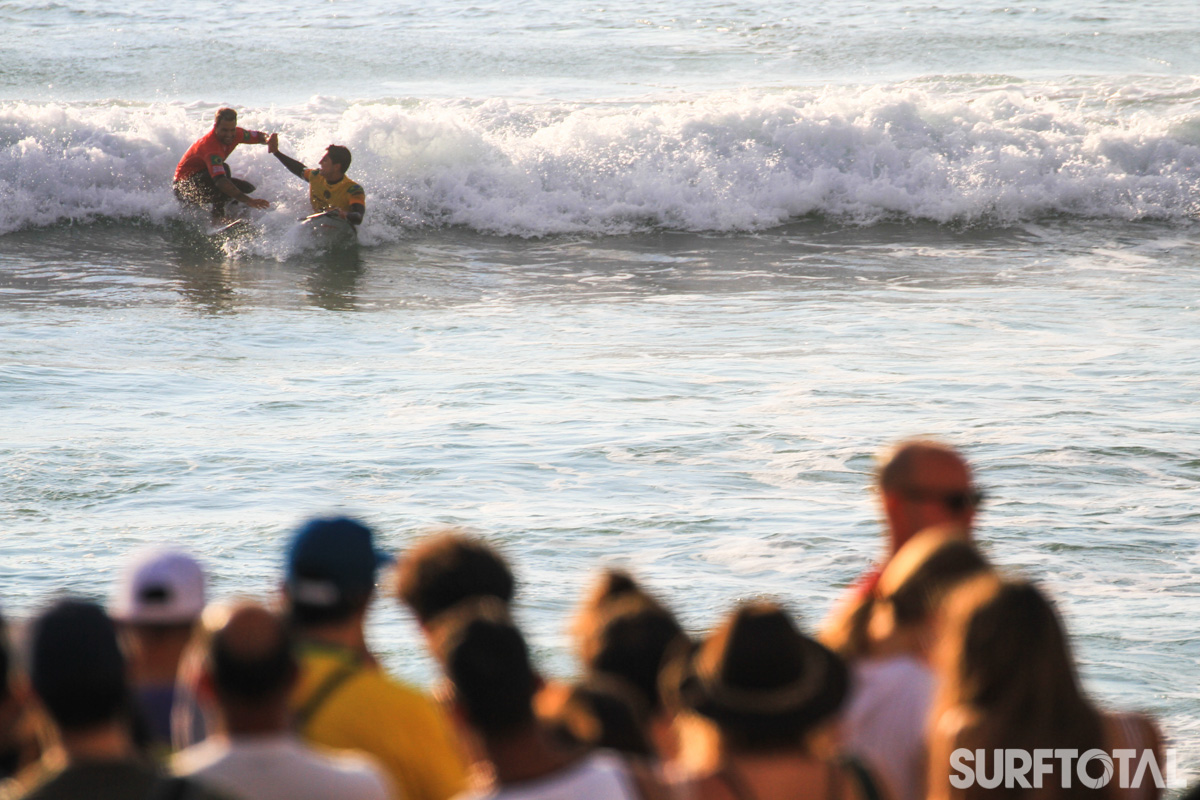 The Men's World Title Scenarios going into the last event of the season, the Billabong Pipe Masters in Hawaii, are as follows:

- If Gabriel Medina finishes 1st or 2nd at the Billabong Pipe Masters, he wins the World Title;

In the second Semifinal, Duru took on Wright in another goofyfoot showdown, but this time most of the action happened on the wave face. Both surfers attacked the rights on their backhand, but the best wave of the heat came to the Frenchman and he posted a 7.83 to distance himself from Wright and take the spot for the Final. With an Equal 3rd place, Wright posted his second-best result of the season and moved up ahead of Jordy Smith (ZAF) to No. 5 on the rankings before the Billabong Pipe Masters.

Michel Bourez (PYF), the first surfer eliminated today in Quarterfinal 1, kickstarted a return to form with an Equal 5th place in Peniche. The Tahitian surfer started his 2018 season strong with two 5th place results and a runner-up result in the first four events, but then suffered a heavy setback with four consecutive 13th place finishes and an even more unusual last place loss in France. A former Pipe Master, Bourez will have one more chance to redeem himself at the final event of the season in December.

In the second Quarter, World No. 1 Medina lit the beach on fire with aerial mastery and gave his opponent Matt Wilkinson (AUS) no chance with a 16.16 heat total (out of a possible 20). The Australian stuck to a different peak with clean little rights to exploit on his backhand but eventually bowed out in equal 5th place at Supertubos.

Duru continued his giant-killing spree and once again played spoilers in the World Title race as he eliminated Wilson in the third Quarterfinal. In a slow heat, Wilson waited too patiently to start putting scores on the board while his opponent was building his scoreline on smaller waves. Eventually, the gap was too big for the Australian to fill and he placed equal 5th. Wilson needed to advance through to the Semifinals to push the title race to Pipeline.

The last Quarterfinal continued with the slow pattern and once again it was a goofyfoot who found the best opportunities early on. Wright surfed a very similar heat to Duru’s and put together a 5.00 and a 6.17 (out of a possible 10) to eliminate Kanoa Igarashi (JPN) in equal 5th. The Japanese surfer failed to advance into a fourth Semifinal this season but put on a satisfying result following a disappointing 25th in France.

The men will now head to the North Shore of Oahu for the final event on the Championship Tour, the Billabong Pipe Masters. The event window will open on December 8 and run through December 20, 2018.

The women’s World Title will also be decided in Hawaii at the Beachwaver Maui Pro, which holds a competitive window from November 25 - December 6, 2018.