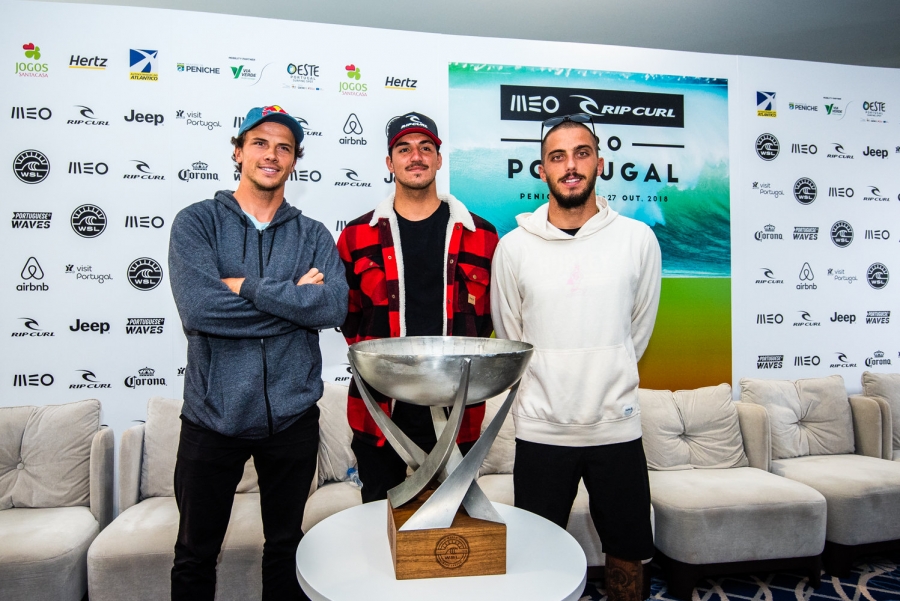 The MEO Rip Curl Pro Portugal, Stop No. 10 of 11 on the Men’s World Surf League (WSL) Championship Tour (CT), will kick off tomorrow....

.....and hold a competitive window through October 27, 2018. With a promising forecast on the horizon, the world’s top 36 male surfers are preparing for a potential start on the event’s opening day.

For the 10th edition of the MEO Rip Curl Pro Portugal, the world-renowned beach break of Supertubos will once again be the battleground for the men’s World Title race. Gabriel Medina (BRA), current Jeep Leader and defending event winner, is the only surfer who can clinch the title early in Portugal. World No. 2 Filipe Toledo (BRA) and No. 3 Julian Wilson (AUS) closely trail Medina but need critical finishes to push the race to the Billabong Pipe Masters in Hawaii.

The Men’s World Title scenarios are as follows:

- Only Medina can claim the title in Portugal by winning the event.

- If Medina wins the event, Toledo will need a 9th or better and Wilson a 3rd or better to take the World Title decision to Hawaii;

- If Medina finishes 2nd or worse in Portugal, the WSL Title will be decided in Hawaii.

Portugal will play an interesting role in the World Title showdown as all three contenders have won this event before. Defending event winner Medina defeated Wilson in the Final of last year’s event. Toledo took his win in 2015, and Wilson won in 2012.

Despite being the only surfer who can win the title early, 2014 WSL Champion Medina is not letting the pressure get to him and plans to stay focused on himself rather than the title. Medina’s first heat will be against Patrick Gudauskas (USA) and wildcard Samuel Pupo (BRA) in Round 1.

"It feels great to be back in Portugal," said Medina. “The waves are really powerful here. My goal is to keep leading the rankings but I'm taking it easy this event. I know what I need to do. I'm focusing on myself. I've been in this position before and hopefully it will all work out."

No. 2 Toledo had been the Jeep Frontrunner for a majority of the season. Heading into the Quiksilver Pro France, Toledo held the lead over Medina and the field, but an unexpected loss against the wildcard and eventual runner-up, Ryan Callinan (AUS), saw him relinquish the Jeep Leader Jersey. The Brasilian will need a 9th place result or better to stop Medina from taking the World Title win early and send the race to Hawaii.

"Supertubos is such a dreamy beach break," said Toledo. "When conditions line up there's some perfect air sections. You can see all conditions and all types of waves in one day. At this point in my career, I learn from my losses. In the past, I would be too involved and dwell on why it happened. This year, I've recognized that sometimes there's nothing you can do. I'm going to do my best here and see what happens."

Wilson is fresh from victory at the Quiksilver Pro France and is well within striking distance of the World Title. Wilson currently sits just 4,645 points down from Medina, who he eliminated in France with only Perfect 10 of the event. Wilson is ready for a big opening day where he will face Connor O’Leary (AUS) and replacement Vasco Ribeiro (PRT) in Heat 4 of Round 1.

"After France, I'm just excited to be back in the Title conversation," said Wilson. "And it's looking like we are going to be greeted with really good swell the next few weeks here. I just got to town and came straight to the press conference. I drove down from France with my family. I'm pretty tired right now but the rumors on the forecast got me pumped. Let's get this started."

Callinan is on a hot-steak in Europe with a win at the EDP Billabong Pro Ericeira Qualifying Series (QS)10,000 event followed by a runner-up finish in France, where he caused a number of upsets by eliminating Toledo, Conner Coffin (USA), and Jordy Smith (ZAF). His success has been rewarded with a replacement position into this event and the 26-year-old will be one to watch as the World Title looms in the distance.

"I love it here," said Callinan. "There's so much culture and it's so different from home. It really allows me to switch off and stop thinking about surfing for a bit. Everything is really surreal right now. I am really fired up with the past two events. That win in France was my best result ever, so I will try to keep that success rolling and keep surfing well.” 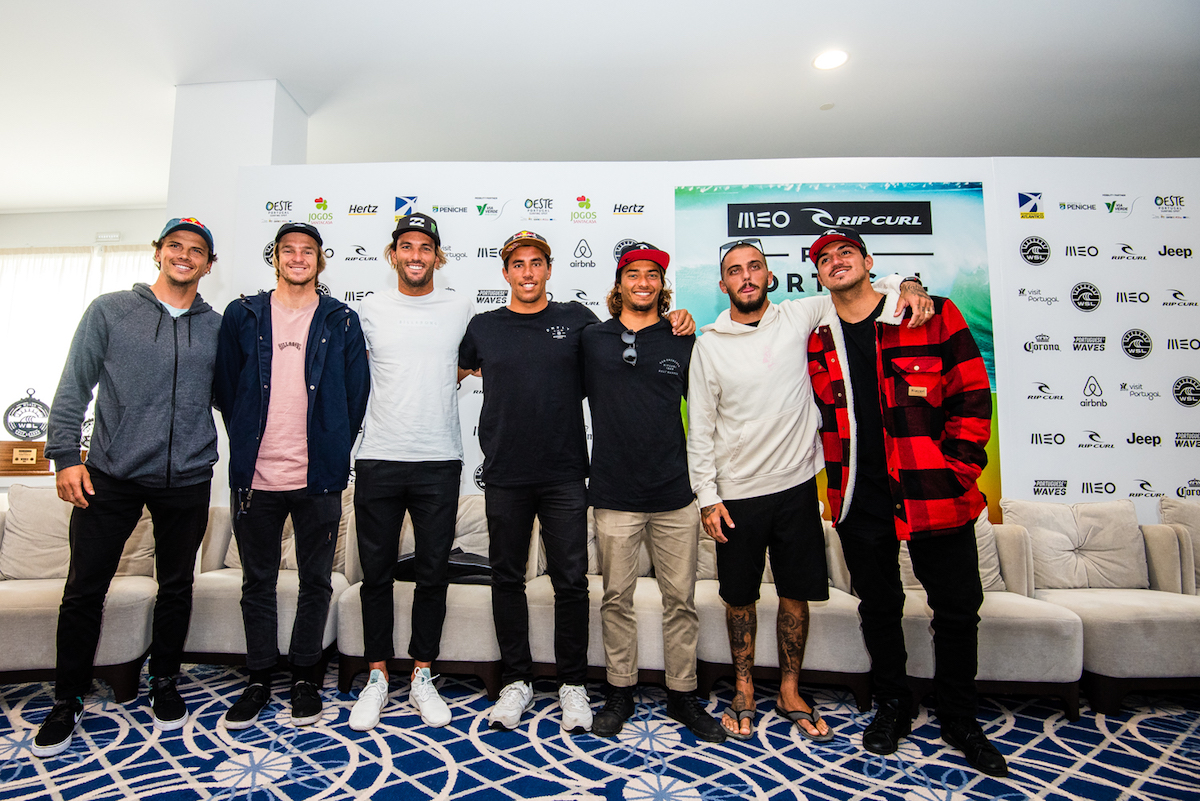 Local hero Frederico Morais (PRT) currently sits in 22nd place on the World Rankings and will need a big result to guarantee his place on the elite tour next season. The event favorite will be up against No.4 Italo Ferreira (BRA) and injury replacement Wiggolly Dantas (BRA) in Heat 3.

“It is always good to be home and the forecast looks amazing,” Morais said. “I can’t wait to start the comp and get some barrels, hopefully. It is crazy being home and having the fans cheering for you. I will get goosebumps hearing everyone cheering while I am running into the water. Peniche is the only place where I feel that. You kind of wait all year for that and it is the best feeling ever.”

John John Florence (HAW), Kelly Slater (USA) and Caio Ibelli (BRA) are out of the MEO Rip Curl Pro Portugal due to ongoing injuries. Joel Parkinson (AUS) has also withdrawn from the event due to medical reasons. WSL replacements Miguel Pupo (BRA) and Wiggolly Dantas (BRA) accepted their positions in this event. Ryan Callinan (AUS) will be the third WSL replacement, as the highest ranked, non-CT surfer on the QS. Vasco Ribeiro (PRT) will be the event replacement as the highest placing Portuguese surfer on the QS.

The two event wildcards have been awarded by title sponsors Rip Curl and MEO. The Rip Curl wildcard is Samuel Pupo (BRA) and the MEO wildcard is Miguel Blanco (PRT).