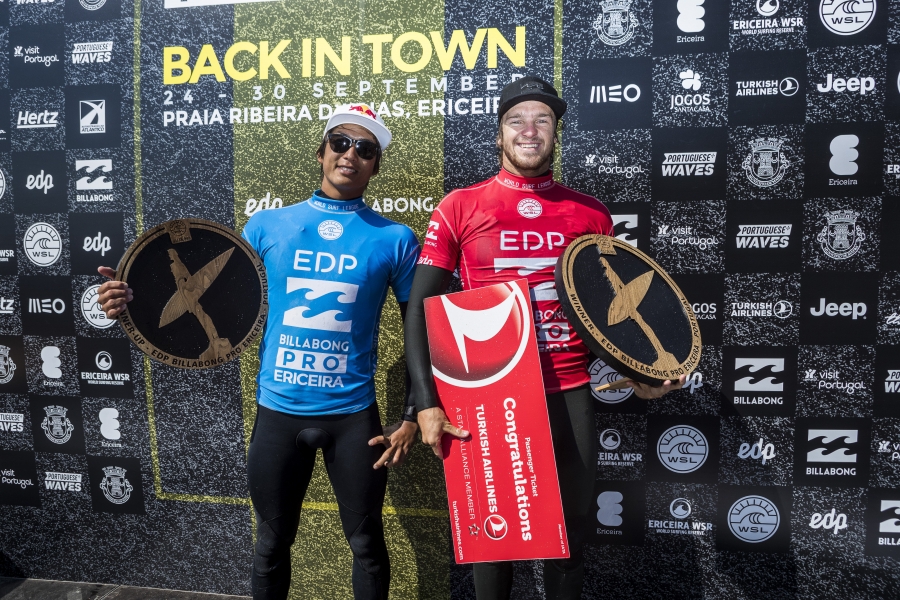 Stop No. 12 on the 2018 World Surf League (WSL) European Qualifying Series (QS), the EDP Billabong Pro Ericeiraunfolded in great conditions all week and witnessed incredible performances by the some of the world’s best surfers, culminating today with Callinan’s crowning.

The Final only really started ten minutes in when Igarashi threw a good nose-pick reverse on a crumbly section before locking in two good turns for his first score of 6.17. Callinan who already had two minor scores on the board got a better third wave to get explosive on his backhand for a 6.93 and a stronger lead.

Things heated up midway through with both surfers starting on back-to-back waves, Igarashi on a long wave with a fatter wall and Callinan on a shorter but more vertical ride. Igarashi posted a 6.77 to take the lead briefly before the Australian’s score came in as a 7.30 to turn the situation once again.

The Japanese picked another wave right away and threw everything at it to collect an 8.17 and go back to first. With three minutes on the clock, Callinan started on another bomb and continued to fit his backhand snaps right in the lip to post a 7.83, steal the lead of the current World No. 9 and eventually take the win.

“This is what we dream of,” an emotional Callinan stated. “To have that last wave come your way in such a clutch moment is incredible and I’m overwhelmed! This is a huge stepping stone and I feel like everything’s clicking for me at the moment. I peaked in the final and everything was amazing! This year’s been a whirlwind I don’t know what’s happened to me, I’ve never won an event before and this is my second for this season!”

Callinan with the 10,000 points collected today in Ericeira will move into second place on the Qualifying Series with an astounding 19,360 total and in theory a spot on the 2019 Championship Tour. He will also have an early taste back amongst the Elite Top 34, as the highest QS athlete after Ericeira, the Newcastle surfer will receive a replacement wildcard into the Quiksilver Pro France next week.

“I got here early and we had a really good crew and we’ve just been having a good time,” he continued. “It felt like home and I felt like I had a family here, plus good warm up surfs everyday and that was awesome.”

Igarashi has been on a tear since his third place finish at the Corona Open J-Bay, collecting a second consecutive win on home turf at the VANS US Open of Surfing this summer, another 3rd place at the Surf Ranch Pro and now this runner-up in Ericeira. The Japanese surfer takes the lead of the Qualifying Series and will surf with no pressure on the remaining CT stops, which could prove extremely dangerous for his opponents.

“I feel good and I seem to finally surf like I want to,” Igarashi said. “This is a year where I really want to prove a point to myself and put on a good performance and do better surfing, so I hope it keeps going. When Ryan beat Gabriel (Medina) I knew I had to buckle down and do my best surfing but unfortunately I couldn’t really find the gear I was looking for out there.”

The opening Semifinal was a goofy foot clash between 2014 World Champion Gabriel Medina(BRA) and Callinan. The Brazilian who posted a massive win in the Quarters to dispatch Ewing was a clear favorite but the opening exchange went Callinan’s way with a 7.00 over Medina’s 6.10. The former World Champion quickly backed up his main score but with an average score, leaving the door wide open for the Australian.

Callinan found a decent wave on the five minute mark for a 5.17 and took back the lead. As time ran down, a final set came and Medina rode it all the way to shore with multiple turns but nothing really significant and his score came up a little short of the requirement. The Brazilian placed equal third and lit up the crowds every time he stood up on a wave in Ericeira.

Ethan Ewing(AUS) was arguably the most form surfer in this event, posting the highest numbers all week. In his Quarterfinal matchup with Medina, the Australian once again posted a massive number, a near-perfect 9.43 but couldn’t back it up in time and he placed equal fifth. Coming in to Ericeira ranked 21st on the Qualifying Series, the former Championship Tour surfer will leave Portugal in 9th position.

In the second Semifinal, Tanner Hendrickson(HAW) took on Igarashi and a first exchange in the opening minutes turned out in the Japanese’ favor with a slightly higher 6 to start with. Hawaii’s Hendrickson backed up his score first but with only a 4.83, leaving once again the door open to his opponent. Another exchange on back-to-back waves just before the five-minute mark offered both surfers an opportunity to improve their scoreboard. Both did but not enough for Igarashi to turn the heat. But the Japanese surfer did not stop trying and finally scored a bomb for a 7.23 to advance in the final.

Hendrickson claims an equal third place and a massive leap from 65th to 15th on the Qualifying Series leaderboard.

During the break between the Semis and Final, two legends of professional surfing revisited old battles during the “Legends Heat pres. by You & The Sea” featuring Mark Occhilupo(AUS) and Luke Egan(AUS). Both goofy foots lit up the crowds as they threaded rides in the empty Ribeira d’Ilhas lineup. Eventually Egan took the win with 13.23 over Occhilupo’s 11.53.

The European leg of the Qualifying Series came to an epic end today crowning Callinan in Ericeira and the focus will now move on to the next two Championship Tour events in France and Portugal.