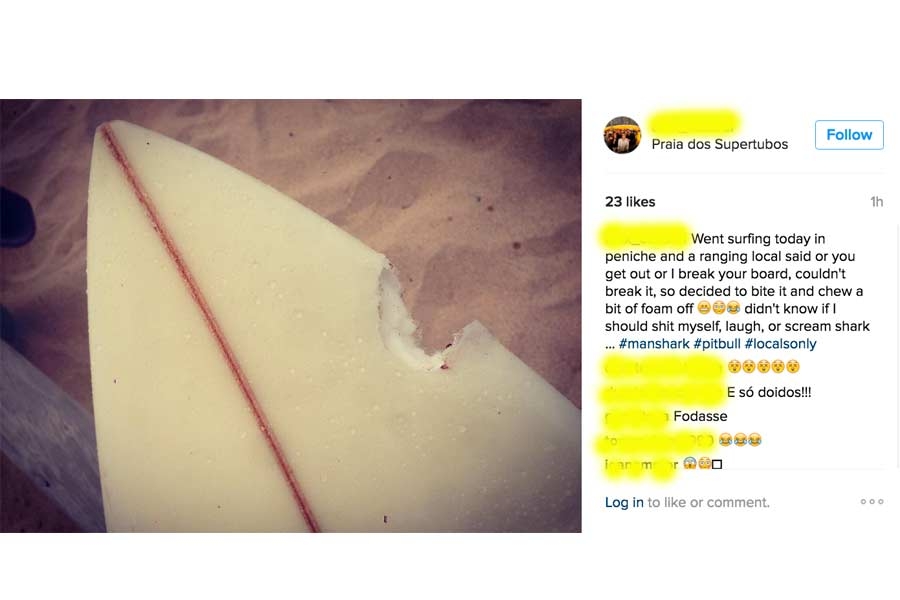 With a new swell entry forecast for today (surf report here) was to be expected that some of the reference spots were the busiest. The  Medão beach, aka Supertubos in Peniche, was one that received the first waves of the swell, but also large numbers of surf fans who wanted to enjoy the last days of  summer vacation for a session with memorable waves.

As usual in these times, much  crowd means trouble in the water, usually between local surfers and visitors. The image that we share at the top was "posted" just now on Instagram / Facebook. The post  was clear... The local guy byte his board like a true shark:
"* alex_ccabralWent surfing today in peniche and a ranging local said or you get out or I break your board, couldn't break it, so decided to bite it and chew a bit of foam off
Leaving aside who is right or wrong, who is or is not local, after all this is just part of the story; the apparent violence of the image, left us stunned and somehow incredulous. The truth is that these are just waves of a swell, the typical summer crowd ...
Anterior Portuguese surfer Frederico Morais has won the WQS Martinique Surf Pro Próxima QUIKSILVER PRO FRANCE, ROUND ONE COMPLETED