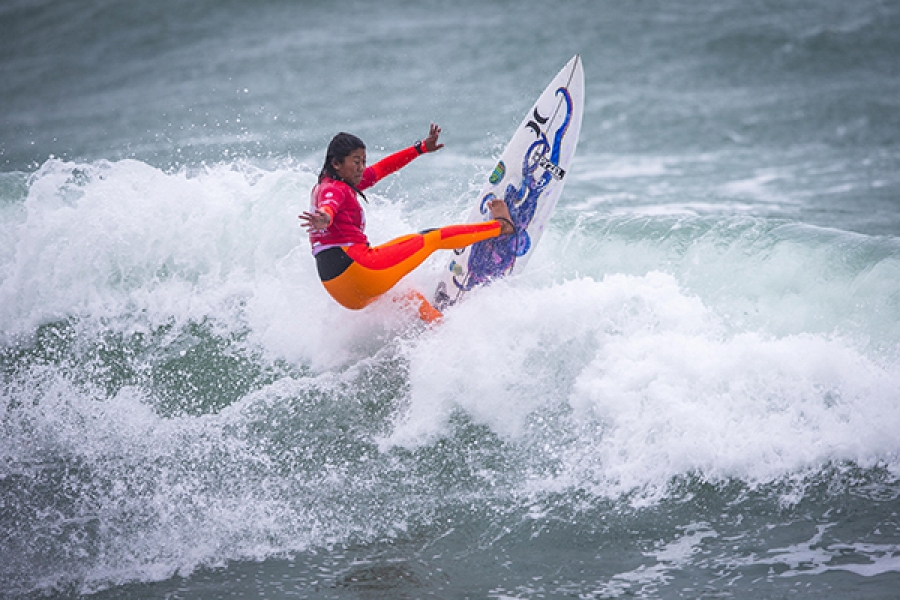 The Ericeira World Junior Championships launched yesterday in stormy three-to-four foot surf at the back-up venue of Praia dos Pescadores in Ericeira, completing the opening round of the women's event as well as four heats of the men.

Hawaii's Brissa Hennessy (HAW), dominated her opening bout and clinched the event's single highest score so far, an impressive 9 point ride for a collection of powerful backhand hacks. The talented natural footer selected her waves wisely and kept building momentum throughout the heat to reach an excellent 16.17 heat total for her spot in the third round of competition.

Local favorite Teresa Bonvalot (PRT), got her campaign off to a solid start in the tricky conditions. Showing no sign of nerves despite competing in her home country, the young Portuguese who placed fifth last year narrowly defeated by eventual World Junior Champion Maeda, finished her heat with a bang and her two top scoring rides including an excellent 8.17.

"It increases your confidence if you get through your first heat and go to the third round, » Bonvalot explained. "Waves are a bit tricky but it's like this all this week so we need to surf and be confident with the waves and surf the maximum. So that's what I am trying to do and be positive."

Reigning World Junior Champion Mahina Maeda (HAW) launched her own assault towards a second consecutive title and surfed a smart heat to advance into round 3 ahead of her competition. Maeda will look to confirm her excellent form when the event resumes.

In the men's division, Joshua Moniz (HAW) opened his account with a few average scores before nailing an 8.33 at the midway stage of the bout. From there he controlled the situation not allowing France's Charly Quivront and Gatien Delahaye to get into the heat.

After his Martinique win last year on the QS but an up and down season overall in 2015, the young Hawaiian looked revitalized and focused to put on a solid competitive year. Traveling alongside family and friends in Portugal, a classic support crew helped Moniz stay on point and perform through a tricky opening day of competition.

Timothee Bisso (GLP) used his trademark solid surfing and heat strategy to advance directly into Round 3. The young Guadalupe surfer looked focused and aiming for a big result against the rest of the world's best juniors..

Event officials have set the next Call to 7:45AM on Tuesday for a potential re-start to either the men or women's competition.

MagicSeaWeed, official forecasters for the event, are calling for:

Strong winds from the west or north west will be the main feature of the first few days along with swell in the 10­15ft range at a mid period and with a lot of wind sea in the mix. It's a challenge to see a window for competition in this period at the main venue.

The Ericeira World Junior Championships will be webcast LIVE on worldsurfleague.comand via the WSL app.

The Ericeira World Junior Championships are supported by Ericeira, Billabong, Portuguese Waves, Moche and Hertz among others.

Anterior THE WORLD JUNIOR CHAMPIONSHIPS ARE ON AT ERICEIRA Próxima RIP CURL SIGNS ONE OF THE BEST EUROPEAN FREE SURFERS: VINCENT DUVIGNAC