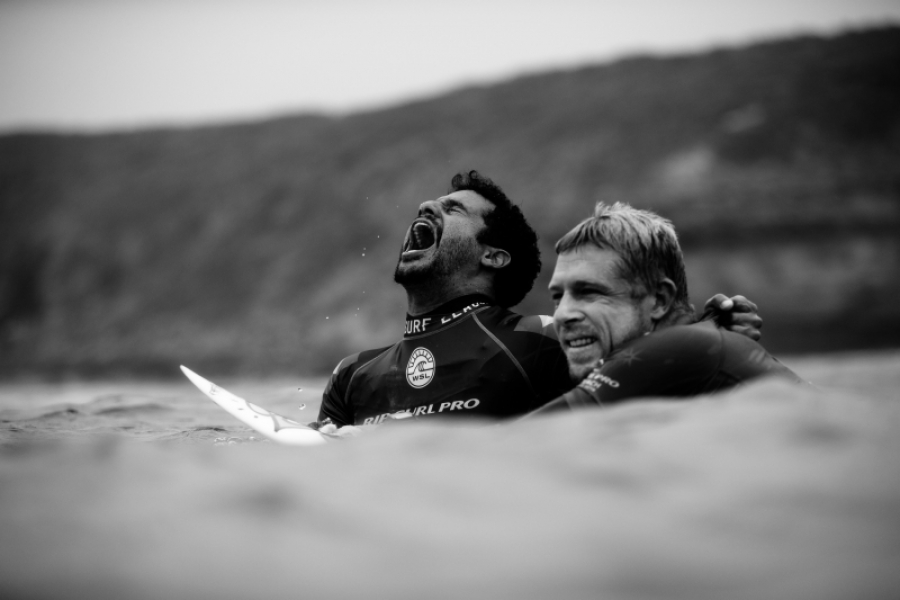 ...Stop No. 2 on the World Surf League (WSL) Championship Tour (CT), after an exciting week of competitive drama, upsets and emotion. The final day of competition ran in clean, five-to-seven foot (1.4 - 2.2 metre) waves at the iconic Bells Beach for its 57th year.

In addition to Gilmore and Ferreira celebrating their wins, three-time WSL Champion Mick Fanning (AUS) celebrated the last Championship Tour event of his competitive career. The four-time Bells winner now says goodbye to elite competition after 17 years on Tour and 22 CT victories. The Australian hero’s story comes full circle as he ends his career in the Finals at the same event where he first won as a wildcard back in 2001.

“Today was really special,” Fanning said. “I always said I wanted to finish the year up here at Bells. Thanks so much to everyone. It has been incredible to see all the support in Torquay and the support of the fans.This is my 20th year of coming down to Bells Beach. I just want to thank my family for all the support you’ve shown over these years. Thank you to my friends that have flown down and making this so memorable. It’s been an amazing career, and I want to thank everyone. " 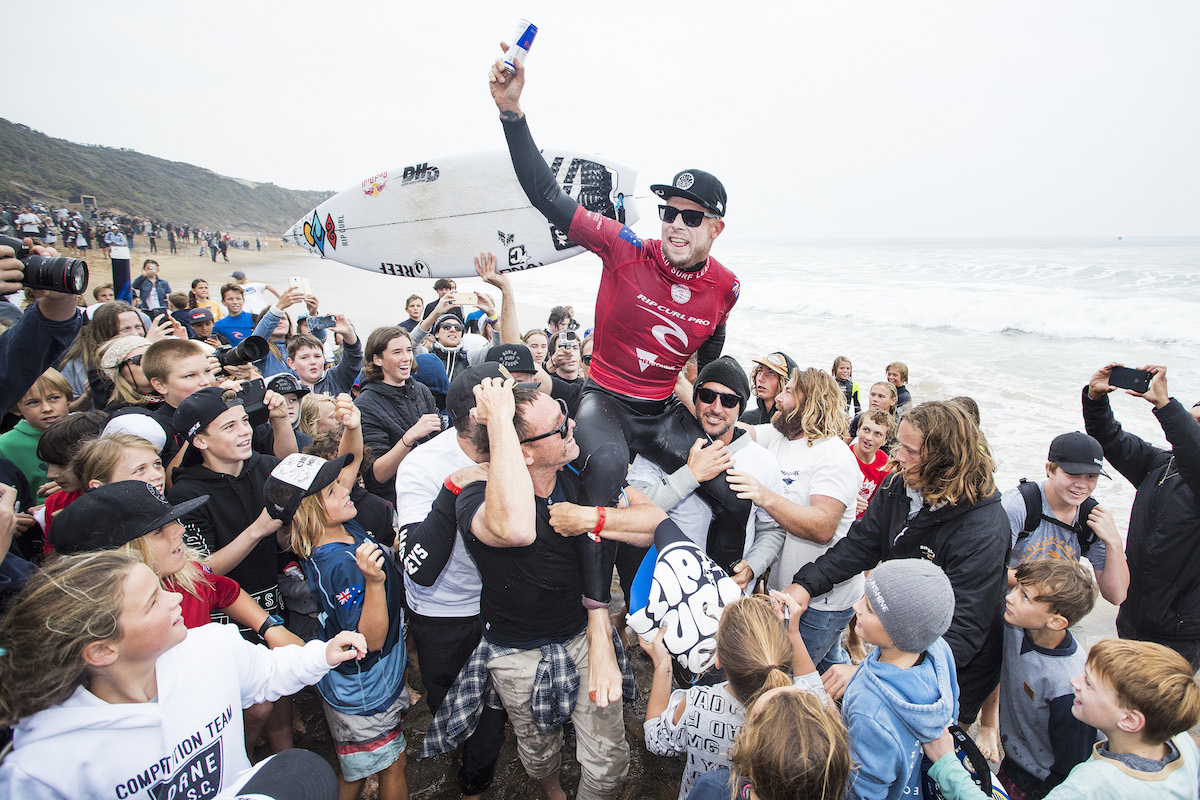 “It was a very special moment with the crowd, best friends here, and then to just be in the Final with Italo (Ferreira) and to see how much it meant for him actually made me feel a lot better,” continued Fanning. “To all the people surfing in this event, it was so much fun. Seabass (Sebastian Zietz), Paddy Gudang (Patrick Gudauskas), Wilko (Matt Wilkinson), Owen (Wright) -- every time I paddled out, I felt like I was going surfing with a mate, and that was really special. To see in that Final just how much it meant to Italo, that was one of greatest things I’ve seen at Bells, so well done Italo. I am really stoked for you.”

Ferreira played spoiler today for Fanning’s fairytale finish with the first CT win of his career. The 23-year-old was unstoppable throughout the entire event, taking down 2014 WSL Champion Gabriel Medina (BRA) in the Semifinals, Ezekiel Lau (HAW) in the Quarterfinals, and Filipe Toledo (BRA) in Round 3.

“I can’t believe it,” said Ferreira. “That was such a sick heat. I started slow, but after that it was amazing. Mick (Fanning) is one of my favorite surfers in the world. But wow, I can't believe it. That was unbelievable. I just want to say thank you God and my family and my girlfriend and every guy that has supported me. I’m just so happy that this is my job. I just wanted to make some sick heats. Mick Fanning, he is one of my favorites, he is my hero. Mick is the best competitor, and I just want to say thanks to Mick.” 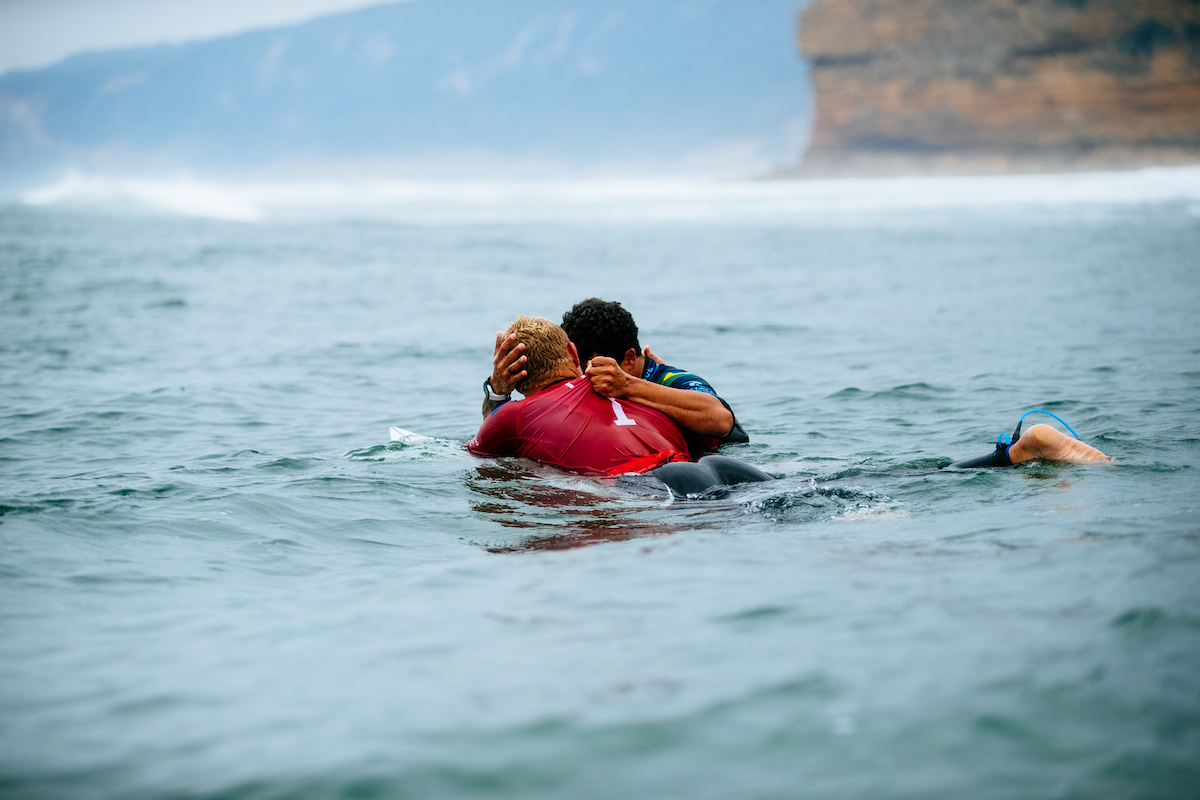 Ferreira’s breakthrough result now vaults him to World No. 1 where he ties with Julian Wilson (AUS) and shares the yellow Jeep Leader Jersey heading into the Margaret River Pro.

“It’s my first win, so I am so happy,” Ferreira continued. “I’ve been working hard over the last few years. I remember my first Final with Filipe (Toledo) in Portugal and it was so close, and now I got it. Last year was hard to me with my injury after the Gold Coast being out for two months. It was terrible, and I just tried to work hard and get better. This is the best feeling.”

Six-time WSL Champion Gilmore earned the right to ring the coveted Bells trophy with her victory in the Rip Curl Women’s Pro. With today’s win, Gilmore joins the likes of Kelly Slater, Mark Richards and Fanning as a four-time Rip Curl Pro Bells Beach winner, a testament to her strength and style in the water.

“It was such an emotional buildup to this moment and it is incredible,” said Gilmore. “I feel like all the focus is on Mick (Fanning), so it doesn’t really matter what happens with the rest of the event -- it was like I could sneak in and get a little ding ding and no one would even care, so it took the pressure off. The most stressful moments of my heats were right when Mick was paddling out for his heat, and it eased the pressure seeing how calm and relaxed he was despite all the pressure on him.” 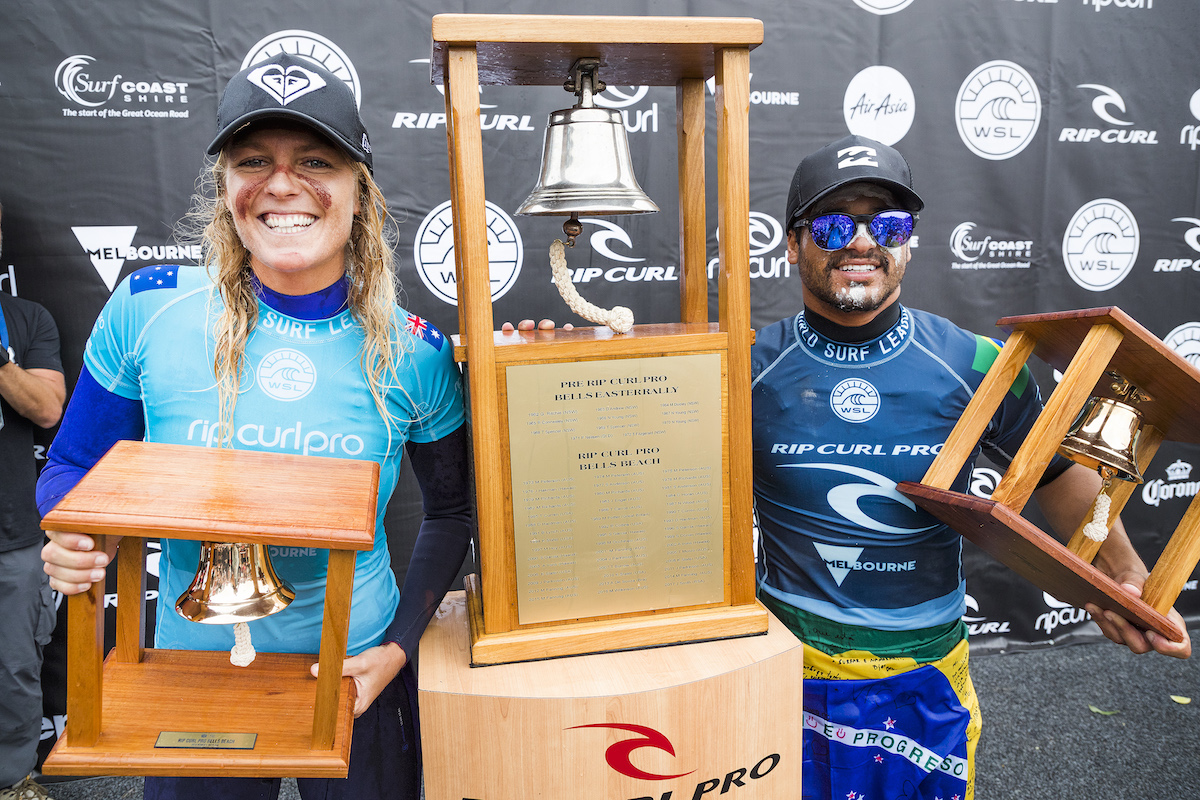 Gilmore’s 27th CT win did not come easy as Tatiana Weston-Webb (HAW) battled until the final buzzer. The hard-fought Final ended with Weston-Webb falling just 0.23 points short of the required score. In her 12 years of competing at Bells, Gilmore has dominated every appearance, with a fifth-place finish being her worst result. The Australian Champion now puts herself in a great position to hunt down her seventh World Title in the yellow Jeep Leader Jersey.

“Tatiana (Weston-Webb) has been on fire this whole event,” continued Gilmore. “All the goofy-footers have been -- I can’t believe it. You never really think about the goofies, but with Tatiana, you can tell that she has found her confidence and her strength. It’s so impressive to have her step up.”

Weston-Webb, 21, was the surfer to beat at Bells. She posted the highest scores throughout the event, including a near-perfect 9.23 in Round 2. Her vertical, backhand surfing looked to be invincible, but unfortunately, she could not overtake the 30-year-old veteran. Weston-Webb’s second-place finish moves her up to 5th place on the Jeep Leaderboard, tied with Keely Andrew (AUS).

“Even though I didn’t come away with the win this just feels amazing,” Weston-Webb said. “I love coming to Bells Beach and all of the crowd support is amazing here. I’d like to thank all of the fans that come down so early in the cold. I feel really good, and my boards are amazing. Now the confidence levels are up, and the sky’s the limit. I’m extra proud to be a goofy-foot, especially because Italo (Ferreira) brought one home for us, so thanks Italo. Goofy-footers have definitely had a rough time here at Bells, but I almost got it. Maybe next year.”

2014 WSL Champion Gabriel Medina (BRA) was eliminated by compatriot Ferreira in the second men’s Semifinal. The two Brazilian superstars unleashed radical maneuvers, but Medina could not overcome Ferreira’s heat score of a 16.00. The third place result is Medina’s best finish at the Rip Curl Pro Bells Beach. He now moves up six places to 7th on the Jeep Rankings.

Patrick Gudauskas (USA) fell to event favorite Fanning in Semifinal 1. The Californian was unable to combat Fanning’s two excellent 8-point rides and exits in Equal 3rd in his first year back on the CT since 2013. This is the 32-year-old’s best result at Bells. Previously, Gudauskas eliminated Michel Bourez (PYF) in the first Quarterfinal.

In only the second event of her rookie year, 16-year-old Caroline Marks (USA) is making a name for herself with stunning results on the elite tour. Marks exits with an incredible 3rd place result after losing to eventual winner Gilmore in the Semifinals. Marks is the youngest surfer to ever qualify for the elite CT and now rockets up to 3rd on the Jeep Leaderboard. Not only is the young competitor ousting World Title contenders in her rookie debut, but she is also making a run for her own World Title in her freshman year on Tour.

En route to her runner-up finish, Weston-Webb dispatched 2009 event winner Silvana Lima (BRA) in the first Semifinal. Despite Lima’s loss today, she was a standout throughout the event with major wins over three-time WSL Champion Carissa Moore (HAW) and two-time WSL Champion Tyler Wright (AUS), and will be rewarded with an eight-spot jump up the rankings to 5th.

The world’s best surfers will now prepare for the Stop No. 3 the 2018 WSL CT and the final event of the Australian leg, the Margaret River Pro, which holds a competitive window from April 11 - 22, 2018.