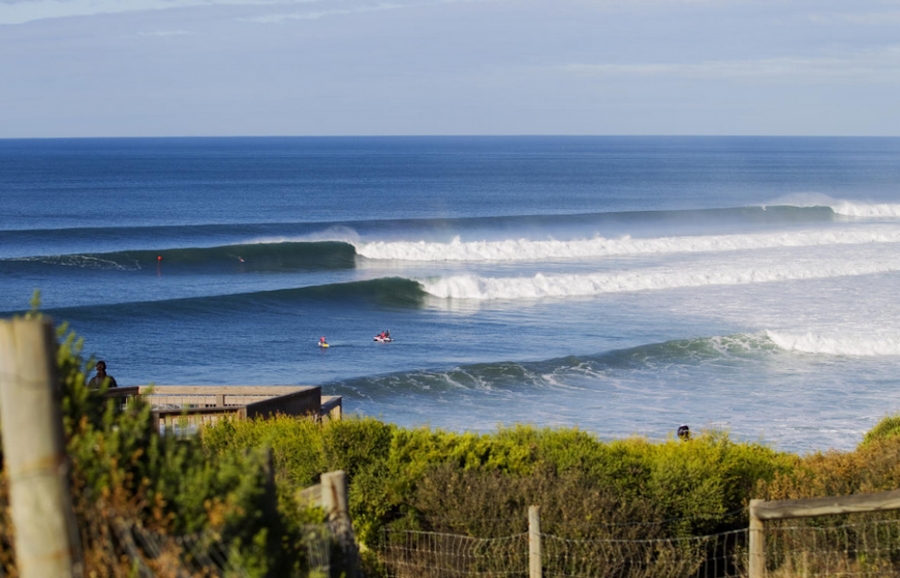 The Rip Curl Pro Bells Beach, Stop No. 2 on the World Surf League (WSL) Championship Tour (CT), completed women's Round 1 and the first eight heats of men's Round 1 today in four-to-five foot (1.2 - 1.7 metre) waves at Winkipop,...

....the neighbouring wave to Bells Beach that handled the Good Friday swell and tides on offer.

Three-time Rip Curl Pro Bells Beach event winner, Moore, commanded the Surf Coast with her win over Sage Erickson (USA) and Bronte Macaulay (AUS). The three-time WSL Champion was in a solid rhythm with Winkipop, powering her way to a winning two-wave score of 14.53 (out of a possible 20) to move into Round 3. Moore will skip the dreaded elimination Round 2, which is where Macaulay and Erickson will do battle when competition resumes.

"It's such a beautiful morning," said Moore. "There are long, beautiful walls coming through. I was really surprised that they made the move here. I've never surfed in a heat at Winki, so it was a first for me, but with conditions like this, I really enjoyed it."

Following the action in women’s Round 1, the competition continued with the first eight heats of men’s Round 1, which witnessed epic battles between surfing’s biggest names.

Defending Rip Curl Pro event winner Jordy Smith (ZAF) was able to fend off a valiant performance by Patrick Gudauskas (USA) in Heat 3 of Round 1. The pair came up against last year’s event runner-up Caio Ibelli (BRA) in one of the most anticipated battles of the day. Smith and Gudauskas went wave-for-wave, but it was Smith who prevailed by taking the lead with only seconds remaining. Ibelli and Gudauskas will now battle it out in Round 2.

“I knew it was going to be a close heat, but I didn’t think it would be that close,” Smith said. “I had the third highest single wave score, but I still won the heat -- that doesn’t happen too often. I was lucky enough to have a good back-up score and I’ll take that win for sure. The level of surfing on tour is so high, I’m really stoked to not be in Round 2.”

2018 CT Rookie Griffin Colapinto (USA) continued his epic run of form this year, taking down Filipe Toledo (BRA) and Michael February (ZAF) in their opening round matchup. Colapinto used an array of innovative moves to advance straight through to Round 3 and solidify himself amongst the world’s elite surfers and as the frontrunner in the 2018 Rookie of the Year race.

“I haven’t surfed Winkipop much, but I planned to sit up the top of the point,” Colapinto said. “It is a really similar wave to Lower Trestles at home in California. It is fast but has great sections for big turns. I really enjoyed that heat and am glad it all worked out.”

Reigning two-time WSL Champion John John Florence (HAW) was eager to bounce back from a shock 25th place finish at CT Stop No. 1 on the Gold Coast when he took to the water in Heat 5 of Round 1. A return to winning form was not going to be easy as he came up against 2018 CT Rookie Tomas Hermes (BRA) who was fresh off a third-place finish at Snapper and 16-year-old trials winner Mikey McDonagh (AUS). Florence surfed a calm heat in wind-affected conditions to take the win and avoid Round 2.

“I’m stoked that I got some good waves out there, however, there is still lots of room for improvement,” Florence said. “The judges were leaving a lot of room for excellent scores, which means there is always the possibility of something amazing happening. It’s really cool how we can move over here to Winkipop from Bells and score the best conditions possible.”

Current Jeep Ratings leader Julian Wilson (AUS) carried on with his sizzling form from the Gold Coast to take a close win over Joan Duru (FRA) and trials winner Carl Wright (AUS). Wilson did not look hindered by his shoulder injury that he sustained prior to the event on the Gold Coast as he used his silky smooth style of surfing to impress the thousands of surf fans at Bells Beach.

“That was one of the better heats I’ve won in a while,” Wilson said. “I always love coming down to Bells and surfing in this event and it definitely feels nice to be wearing the yellow Jeep Leader Jersey. Usually, my goal going into an event is to win, but this week it is to meet Mick (Fanning) in one last heat. To surf against him one last time at Bells would be amazing, so that’s my goal for sure.”