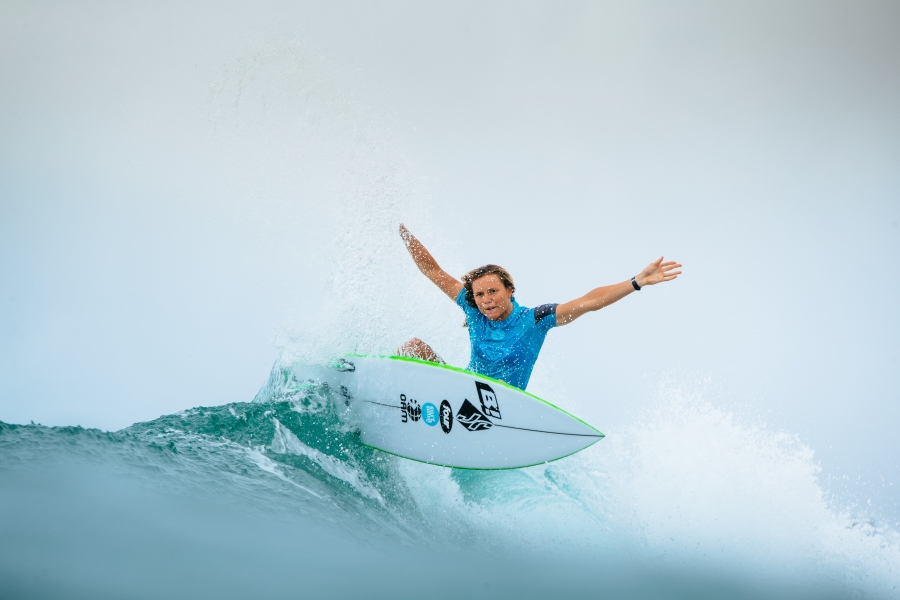 With the conditions holding up all day, event officials decided to run through Rounds 2, 3, and the Quarterfinals. Now only four surfers remain in contention for the 2018 Roxy Pro Gold Coast title.

In what was undoubtedly the upset of the entire event, six-time Roxy Pro Gold Coast event winner Stephanie Gilmore (AUS) was taken down by fellow Queenslander Keely Andrew (AUS). Six-time WSL Champion Gilmore looked in good touch throughout the day but fell victim to a slow ocean in Quarterfinal 4 waiting with priority until the final minutes, only to find a midrange score. Needing to improve her situation in the dying seconds, Andrew took off on a smaller wave and got to work, tagging it all the way down the point to post a 6-point ride and progress into the Semifinals. Gilmore finishes her home event in a respectable Equal 5th position.

“I’m a bit shocked right now,” Andrew said. “Surfing out here against Steph [Gilmore] at her home break was incredible. The waves looked fun all day, but it slowed down a lot in our Quarterfinal. I was so nervous because she only needed a small score, and I only found out that I’d won when I got back to the surfer’s area. I’ve worked really hard in the offseason and it feels so good to know that the hard work has paid off.”

2017 Roxy Pro Gold Coast runner-up Lakey Peterson (USA) was in ominous form today. The Californian posted excellent scores all the way to the Quarterfinals where she eventually eliminated reigning WSL Champion and current World No. 1, Tyler Wright (AUS). Peterson’s trademark frontside arcs sent a shot over the bow of her fellow competitors as she hunts for her first CT Victory since 2012.

“It’s crazy -- it’s only two days into the season and I’m into the Semis,” Peterson said. “We’ve had perfect, quintessential Snapper today with long perfect waves and sunshine. Tyler [Wright] is a two-time World Champion for a reason and she’s someone I look up to, but I always feel like I surf my best against the best. The only option I had to beat her was for me to surf my best, so I couldn’t hold back. There was nothing I could do to change her surfing, so I just focused on mine and it worked out in the end.”

After an injury-plagued 2017 season, Hawaii’s Malia Manuel comes into 2018 with the aim of involving herself heavily in the World Title conversation from the start of the season. The stylish natural-footer has already achieved this with an amazing display at Snapper Rocks. Manuel’s best performance came in Quarterfinal 2 where she posted one of the highest heat totals of the event, a 15.83 (out of a possible 20), to overcome three-time WSL Champion Carissa Moore (HAW), who leaves in Equal 5th place.

“I’ve met Carissa [Moore] in the Quarters a couple of times here in the past and she’s beaten me every single time,” Manuel said. “I remember some of those matchups and they were a bit slow and hard to choose what waves to take, but today we had so many waves and this is exactly what you want from your first event of the year. This will be my first Semi at Snapper and it’s a great start to the year for me. Hopefully, I can use this momentum as it’s a long year ahead.”

Current World No. 3 Sally Fitzgibbons (AUS) looked destined to end up in the Semifinals as she tore through the field at Snapper Rocks. In Quarterfinal 3, she had the tough task of challenging 2018 CT Rookie Caroline Marks (USA) -- who had been taking down the big names all day -- with an impressive display of backhand surfing. Marks’ run came to an end at the hands of Fitzgibbons who was on fire, posting the highest heat total of the entire event, a 16.57 (out of a possible 20).

“It feels so good to be out there on a dreamy day like this,” Fitzgibbons said. “The waves have this perfect shape to them. I was out there in my own world enjoying surfing and I’ve found myself in the Semis. It’s been an exciting day to watch. There’s been a lot of excellent surfing and fins being thrown and I really enjoy the progressive side of the sport. I’ve been having so much fun in my freesurfs, and I’ve been trying to bring some of that into my heat surfing.”

Although Marks was unable to overcome Fitzgibbons, she finishes her first CT event as a rookie in Equal 5th after taking down some of surfing's biggest names including Sage Erickson (USA), Silvana Lima (BRA), and Gilmore.

“I think a few years ago, I would have been star-struck and not sure of what to do out there,” Marks said. “But now, even though they’re my idols, I really want to beat them and go and out and perform and win. Today wasn’t my day, but I just need to focus on the positives.”