The second Event of the World Tour organized by the World Surf League ends in epic conditions, and John John Florence's had an Imperial performance.

If there was an athlete who stood out throughout this second World Tour Event in Margaret River, that was undoubtedly, John John Florence.  John John improved a lot his mind set after winning the 2016 World Tittle, the psychological pressure that existed until then disappeared, and this was clearly reflected in his performances in competition. An average heat score over 19 points out of 20 possible, from round 3 by John John allows to understand his imperial performance in mostly ultra-heavy wave conditions on the main break in Margaret River.

During the final analysis by WSL commentator Barton Lynch (ASP World Surfing Champion in 1988), Barton mentioned that he had never before seen such diversity of well-executed maneuvers by a competitive athlete in such conditions in Margaret River . John John thus confirms to be the "show man" of the WSL World Tour.

John John passed the quarterfinals ahead of Tahitian Michel Bourez, despite this last having made the strongest heat maneuver, a hyper critical and controlled lay back snap in the hardest part of the wave. However, this moment happened near the end of the heat, allowing Bourez only to leave the "combo" situation in which he was. In the semi-finals, it was Jack Freestone that made a very discreet performance, below his potential, John John made here a total of 19.27 points leaving his opponent in combination situation.

The other Finalist at this event that had a super solid performance was the Californian Kolohe Andino,  (4th place in the World Tour 2016). Kolohe advanced all of his heats in the first position and was only defeated in the final by John John Florence.

Curiously it was in the most disputed heat that Kolohe Andino had, the semi final with the Brazilian Filipe Toledo that the competition was interrupted due to the potential presence of sharks in the line up. The organization with the agreement of the surfers suspended the heat until the competition area was safe.

This Drug Aware Margaret River Pro that restarted with the men's quarterfinals, ended on the last day of the waiting period with perfect and heavy waves breaking conditions on the main break of Margaret River. The WSL thus ends in beauty this second 2017 event with the right decisions so that athletes and public enjoy the best conditions of waves, thus guaranteeing high performances and the respective enthusiasm.

* The waiting period for the third World Tour Event, the Rip Curl Pro Bells Beach starts on April 12th and runs until the 24th. 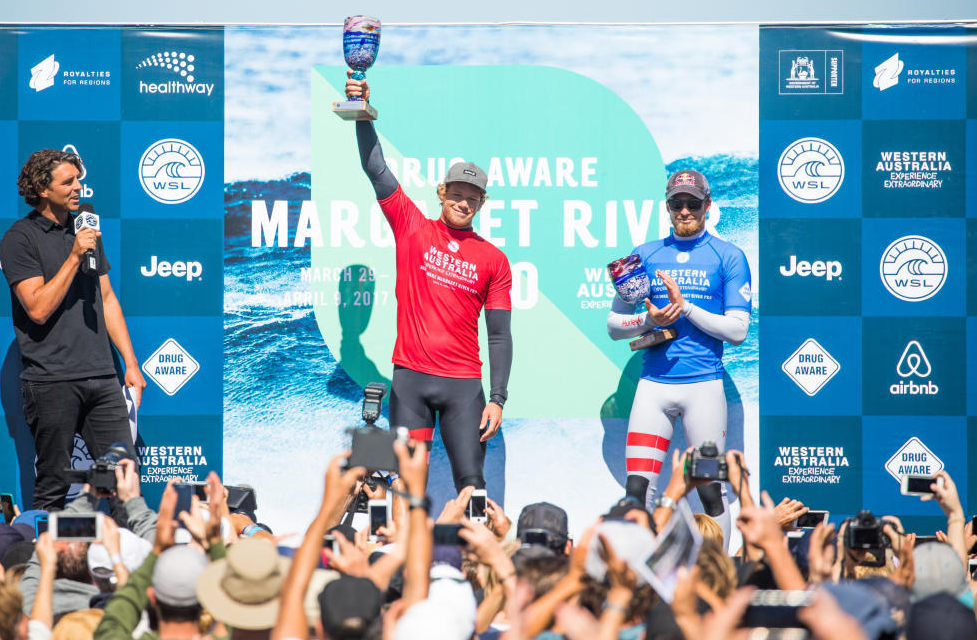