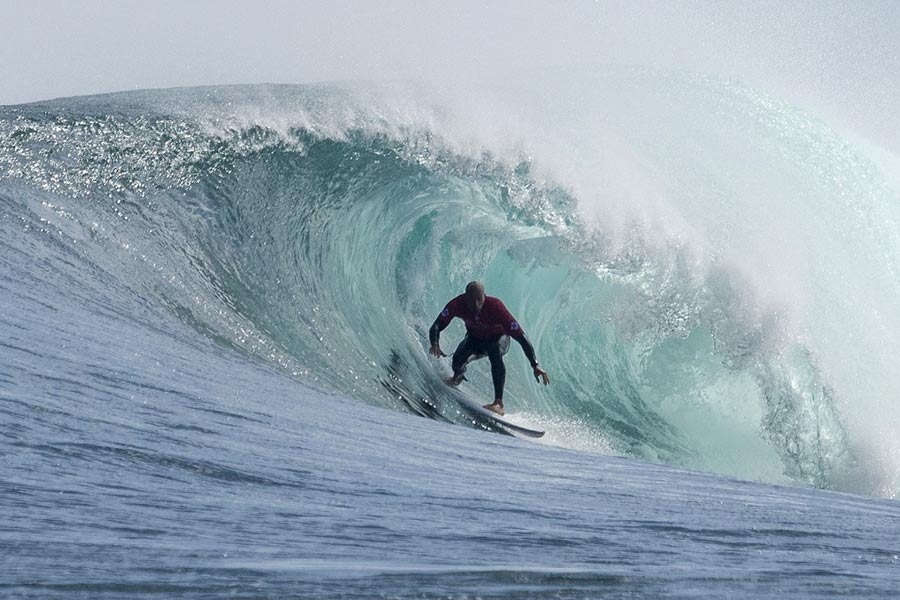 Kelly Slater is already in the round three. Click by WSL

The first day of the Drug Aware Margaret River Pro, the 2nd stage of the 2017 Championship Tour,  was absolutely historic with the start taking place at North Point, one of the alternative spots of the event in the west of Australia. Waiting period until 9 April.

It was the first time in WSL history that this surf spot was used when the main break still working.

The first men's round was in the water with waves between 1.5 to 2 meters. Throughout the day, there were not many high scores and in some heats the winner's score did not reach 10 points. The inconsistency of the waves, coupled with some difficulty in being in the right place (positioning). This situation marked most of the heats, the winners only had a good wave score, sometimes not even that.

In the first heat of the first round, Kelly Slater defeated Mick Fanning and Leonardo Fioravanti. The final score of 8.07 points and the best wave of a 4.17 reveals that it was a very paused heat, without great emotion. That wave inconsistency marked all the day.

In heat 4, Jordy Smith was the first to break the 10-point barrier, scoring 13.76 points as the final score, qualifying to Round 3 ahead of Nat Young and Kanoa Igarashi. In heat 5, wildcard Jesse Mendes also had a good performance, leaving Gabriel Medina in 2nd and Wiggolly Dantas in 3rd place. The QS warrior advances to round 3, giving reason to the organization's invitation.

World Chapion, John John Florence totaly dominated the heat 5, getting 13.67 points (7.17 + 6.50), leaving wildcard Jacob Willcox in 2nd place with 4.40 points and Portuguese Frederico Morais in 3rd with 3.40 points points. The low score achieved by Frederico and Willcox shows how inconsistent the waves were in some heats.

In general, this first round had very few emotion,  the surfers had some trouble finding the right place to be. However, the experience that each one has in this spot also turned out to be fundamental. The big question now seems to be to make a decision: either continue the second round in the same spot or switch to the main break or even The Box. Most athletes seem to prefer The Box because is more challenging, and tubular wave, feeting more on a Championship Tour event.