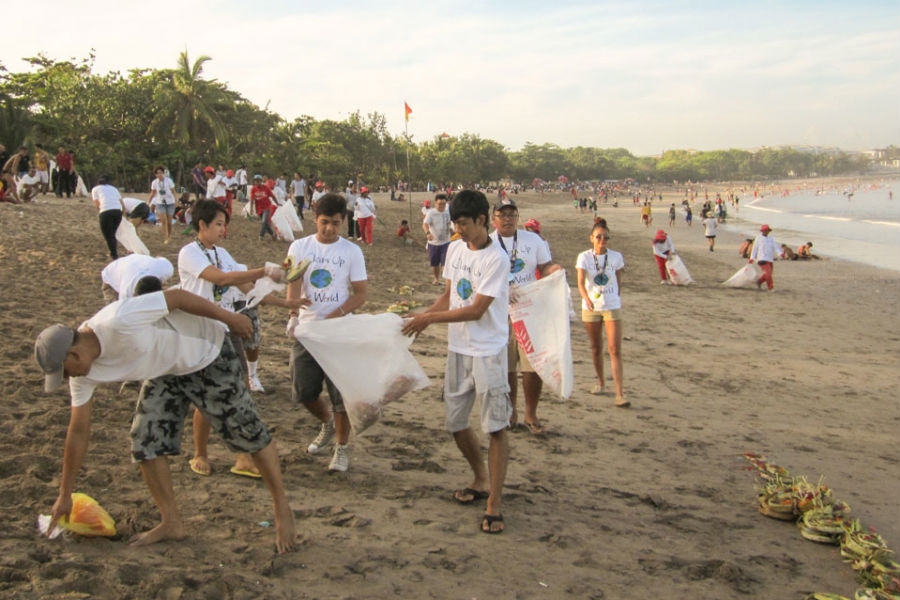 Their goal is to make the Governor ban plastics in Bali.

The Bye Bye Plastic Bags Girls, Isabel and Melati Wijsen, are putting plastic where their mouths are in a bid to force a meeting with the governor of Bali to highlight the plight of their campaign to rid the island of plastic bags.

On November 24, the girls will begin a food strike as added leverage to get the governor,....Pastika,  to meet with them and put a timeline on a law that will ban the use of plastic bags on Bali.

The girls, who have just returned from India where they were met with standing ovations at the INK Conference in Mumbai, have been gathering widespread support for their campaign in a bid to ramp up more support for the Bye Bye Plastic Bags (BBPB) petition to raise a million signatures.

"It is now time for Pastika to meet with us," says Isabel. "We and the team have done a lot of hard work to get our campaign noticed and it is only fair that Pastika takes the time, like many prominent people have now done, to talk to us about how we are going to stamp out the problem of plastic bags on Bali," says  Melati.

"If we have to go on hunger strike to get his attention, then so be it," says Isabel.

BBPB is a social initiative driven by children,  local and international, living in Bali between 10 and 15 years old who are committed to preserving the beauty of Bali by banning plastic bags. The initiative was founded by Green School students, Melati and Isabel Wijsen in late 2013 and is now made up of a dedicated team of 25 children, with more joining from around the world every day.

Members of the team just have been to a work shop about plastic in Jakarta  and others will be traveling to Sabah and Singapore and later Sydney to take part in Rotary conferences after it was announced that Rotary International are to get  behind the BBPB team to get more signatures for the worldwide online petition run by AVAAZ (link). This comes off the back of the enrollment of Bye Bye Plastic Bags team members into the new INTERACT Division of Rotary Club of Canggu.

BBPB have been getting signatures from around the island and have recently been granted access to Bali International Airport in their bid to raise awareness for the campaign.

So far BBPB had raised nearly 65,000 signatures for their petition through AVAAZ, spoken to  more than 3,500 students across the world in three different languages and is running a plastic  bag-free program in a pilot village on Bali, with local authority’s approval, as well as raising general awareness at markets, events and festivals.

The group have already garnered significant support for their lobbying innational and international media and have met and gotten the support of Jane Goodall and her Roots and Shoots program and the UN Secretary General, Ban Ki Moon. As a result of the meeting with the UN Secretary General the BBPB campaign has the right to carry the official UNICORN logo.

This week the team one Bali Yak Awards and received a nomination by The Role Foundation for the Green School to become role model high school for 2014.

The BBPB team  have sent many letters to the government and to the Governor but he has still not made any effort to respond. With all the publicity surrounding the campaign the girls have decided to act now to speed up the process. They will NOT stop drinking but WILL refuse solid food from sunrise to sunset fromNovember 24 until they have this meeting.

On November 28, the girls are asking their school and all those on Bali aware of their campaign, to join them.

FOR MORE INFORMATION contact ; This email address is being protected from spambots. You need JavaScript enabled to view it. or call 08113865907