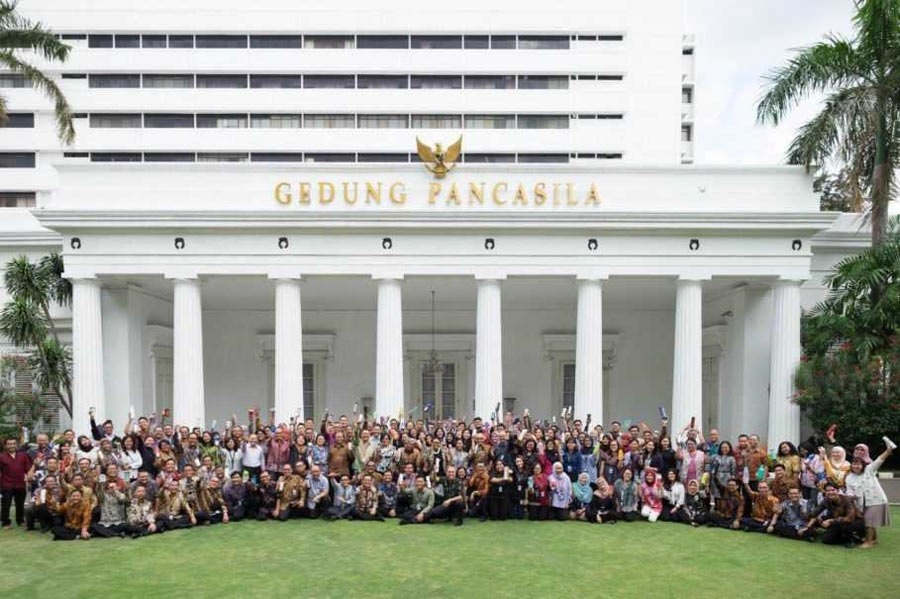 Foreign Minister Retno Marsudi and her staff pose with reusable water bottles in front of the Pancasila Building in Central Jakarta. (Photo courtesy of the Ministry of Foreign Affairs)

The Ministry of Foreign Affairs has started the year with a commitment to reduce plastic waste.

"In a video issued by the ministry, Foreign Minister Retno Marsudi and her staff are seen holding reusable water bottles.
"We are starting the first day of work in the new year with a commitment to reduce plastic waste," Retno said. "We'll be using bottles just like this every day. Let's protect our environment by reducing our plastic waste."

This follows an initiative in March last year by Maritime Affairs and Fisheries Minister Susi Pudjiastuti to reduce the amount of plastic waste generated by her ministry.

The use of plastic bottles is now prohibited at her ministry's offices and anyone caught doing so is reportedly subject to a fine of Rp 500,000 ($35).
Retno and Susi co-hosted last year's Our Ocean Conference in Bali, where the issue of plastic waste topped the agenda.

As Indonesia is on a challenging journey to achieve its ambitious target of a 70 percent reduction in marine plastic pollution by 2025, even small initiatives by officials such as Retno and Susi should serve as an inspiration to collectively address the issue.

Indonesia is the world's second-largest marine polluter after China, and a habit of excessive daily use of plastic materials largely contributes to this.

According to a 2015 study by the University of Georgia and published in the academic journal Science, Southeast Asia's biggest economy generates between 0.48 million and 1.29 million metric tons of plastic marine debris annually."