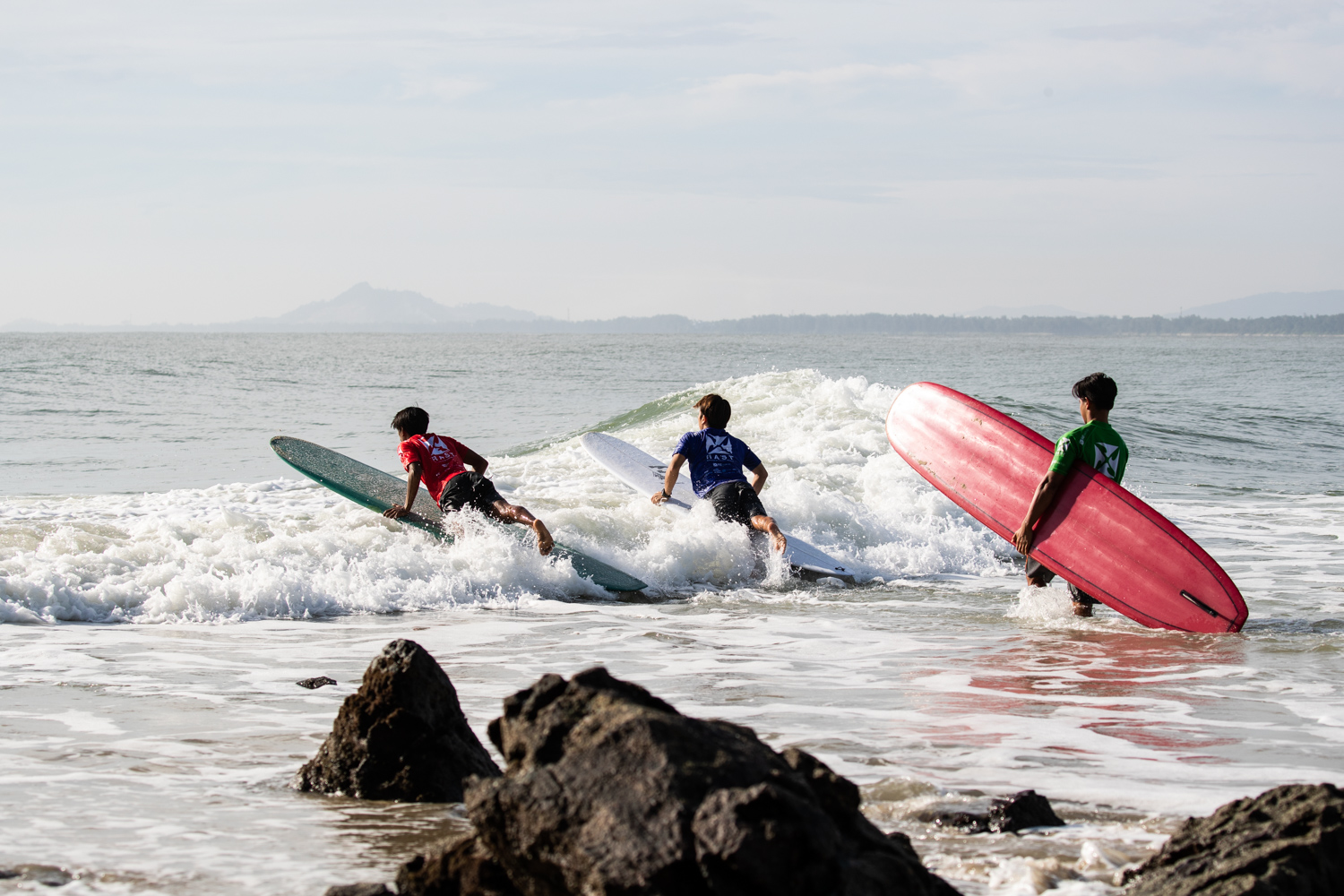 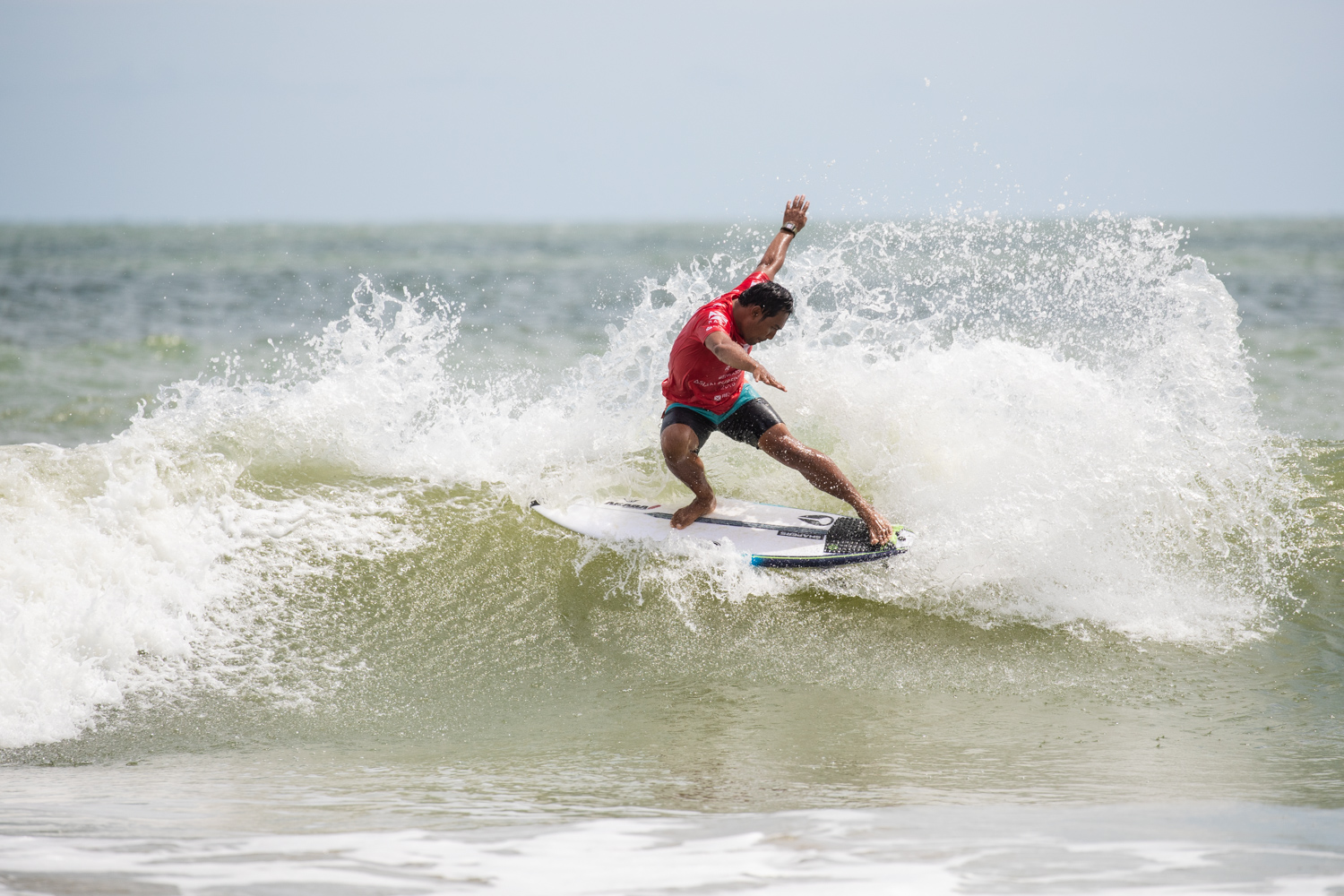 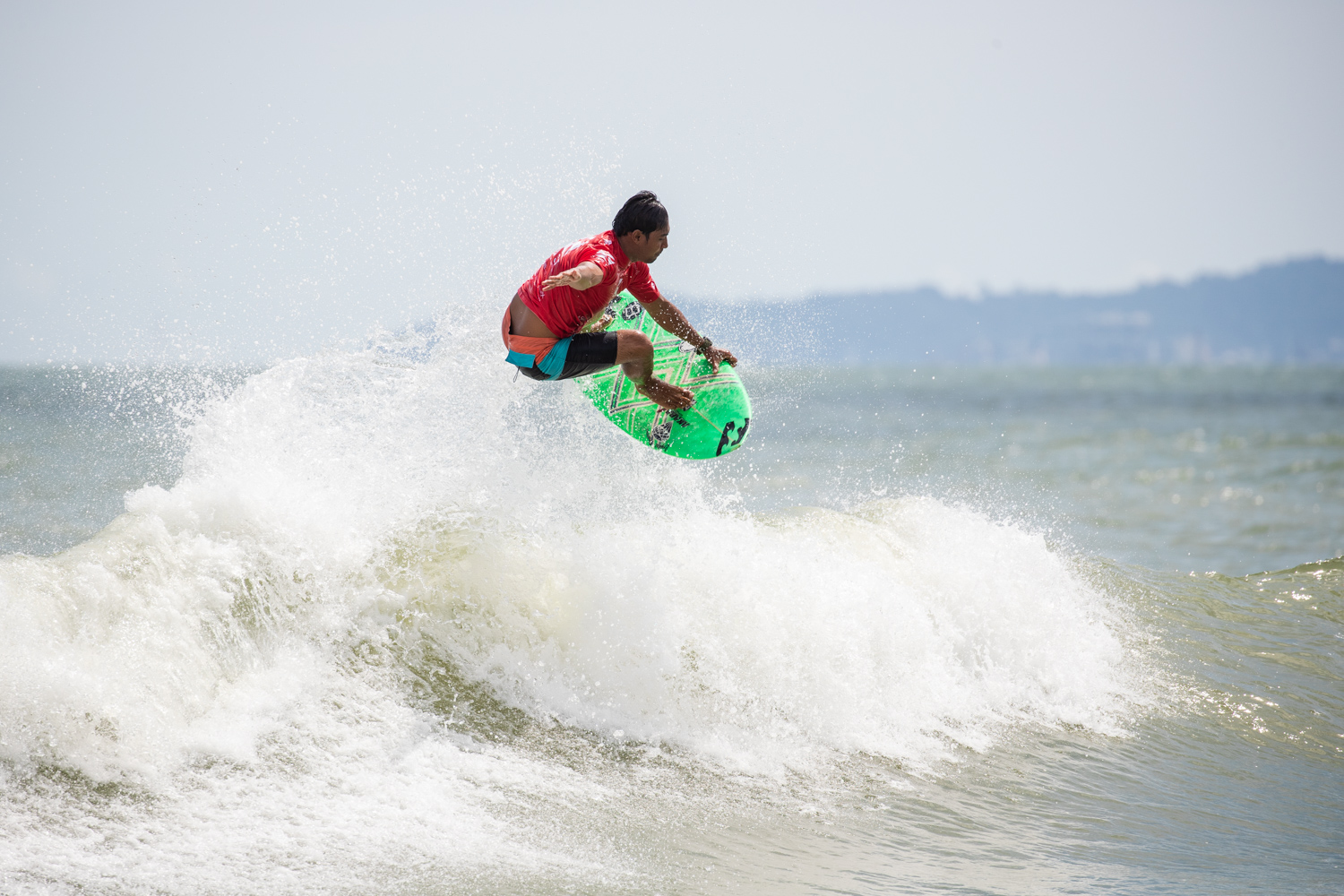 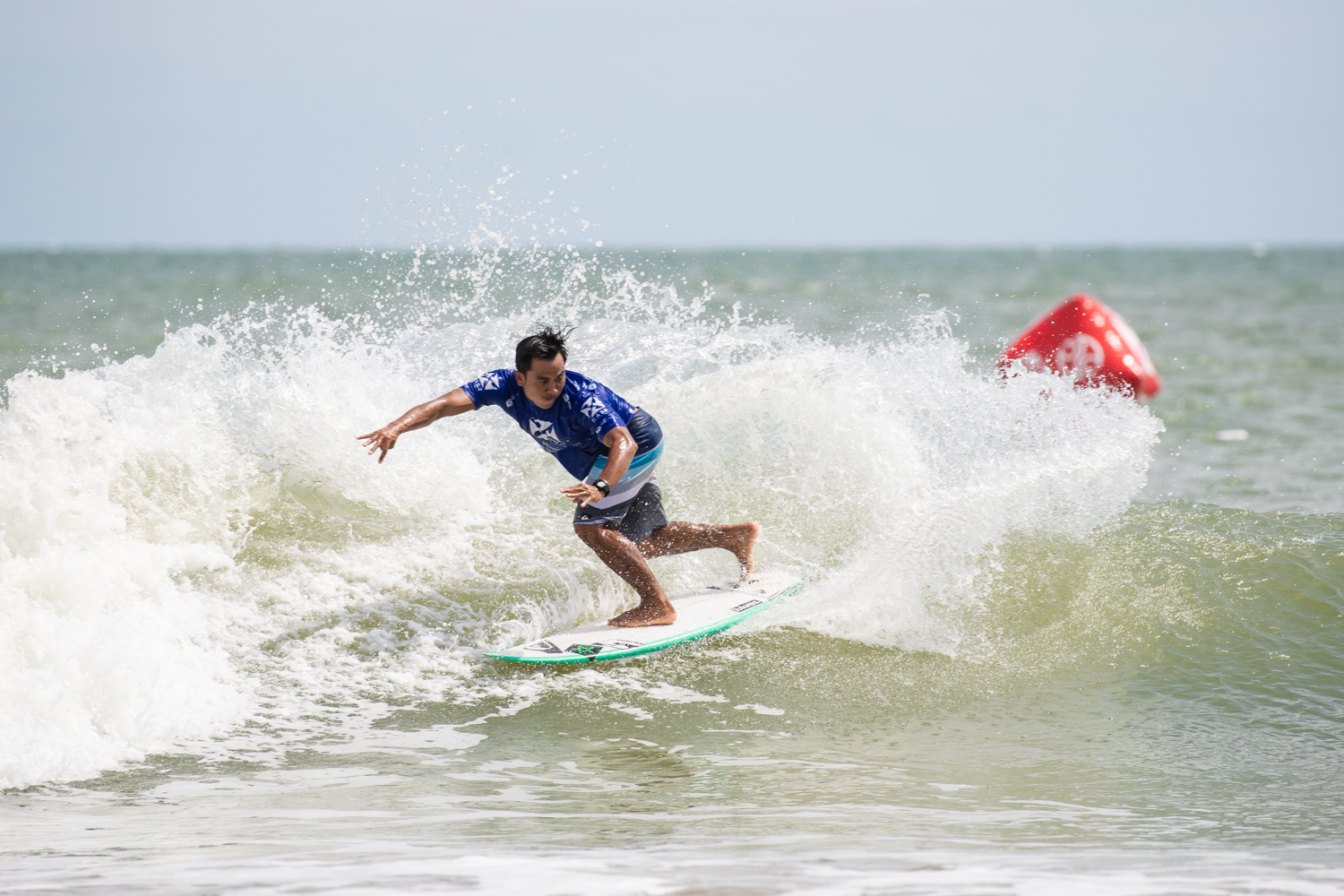 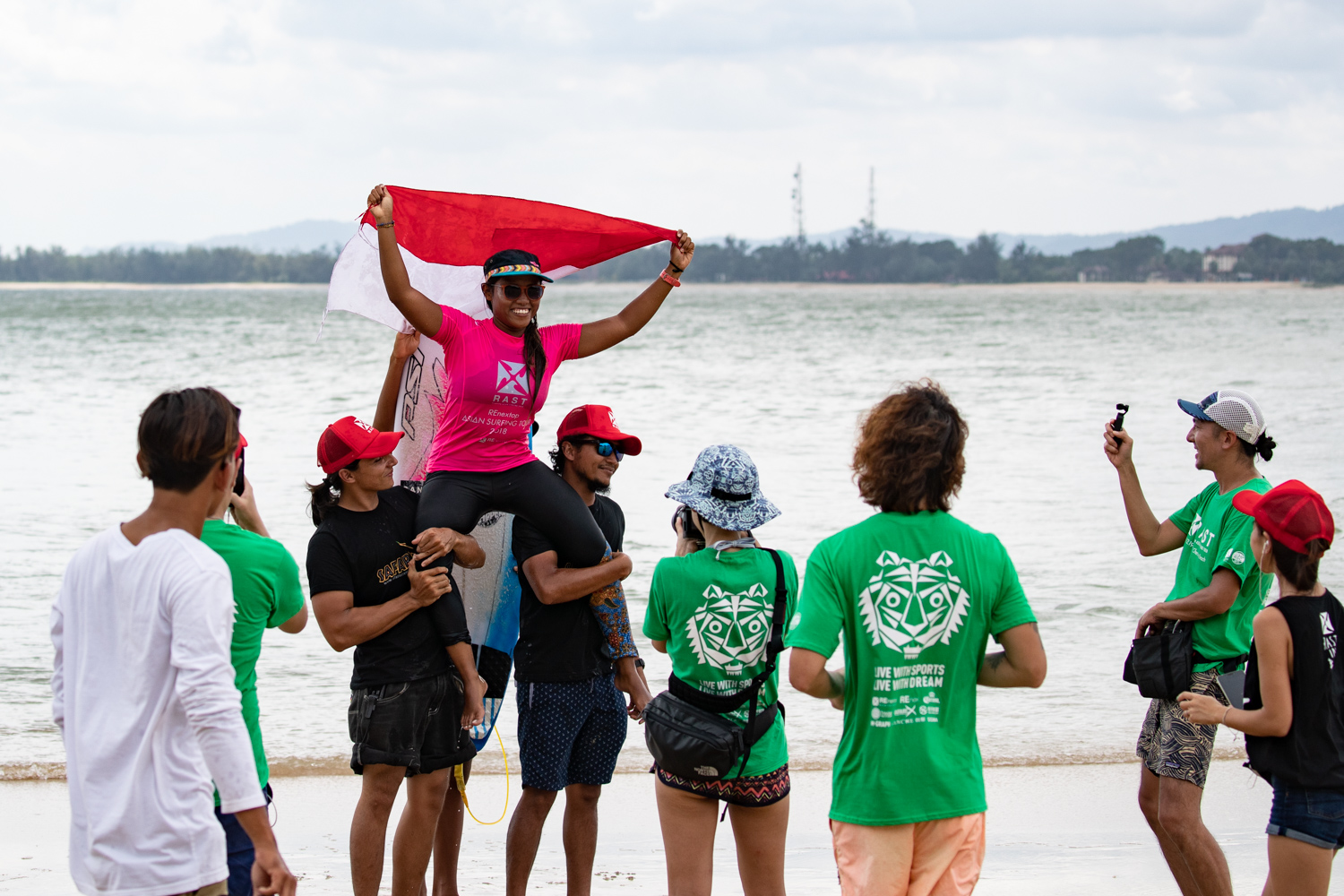 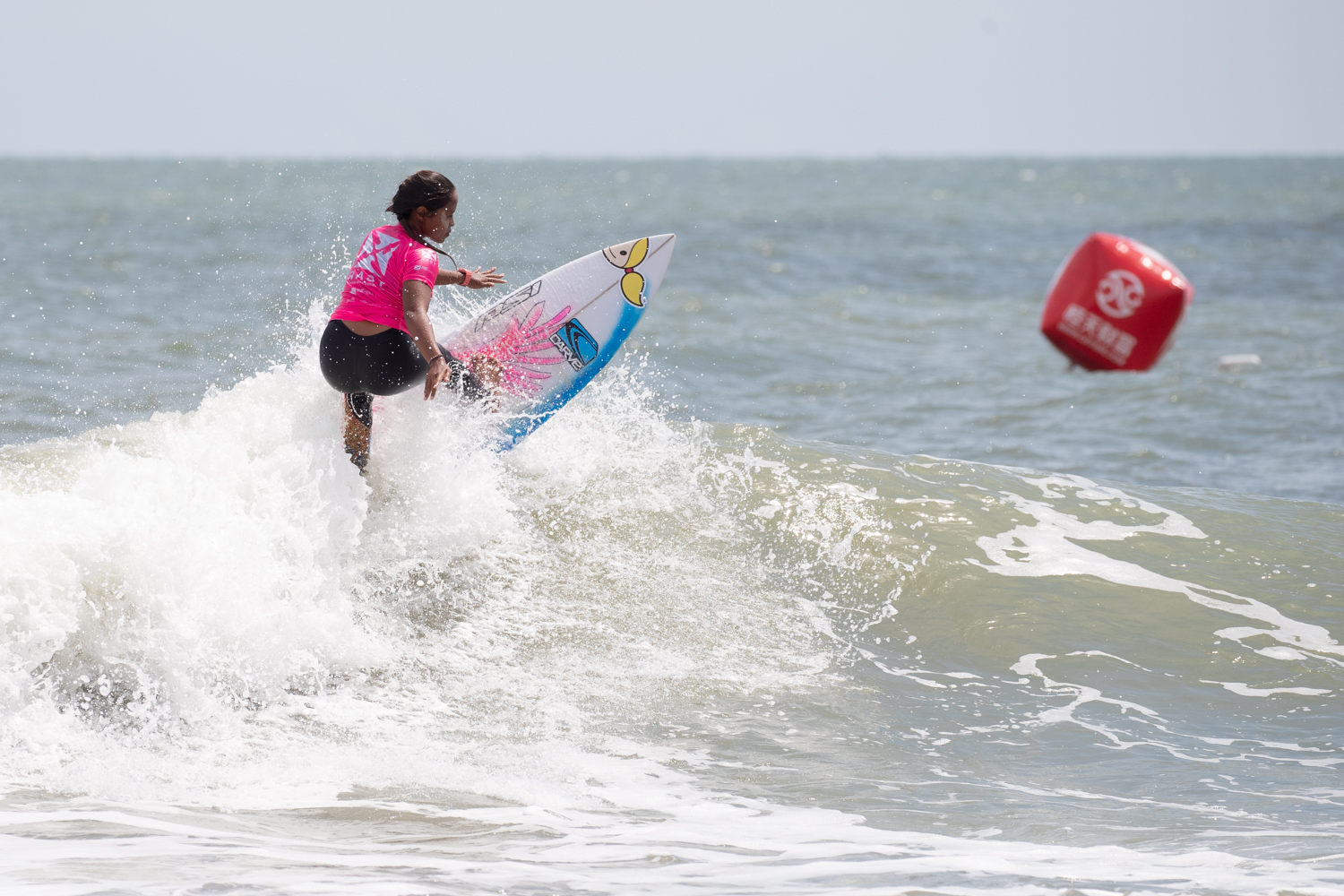 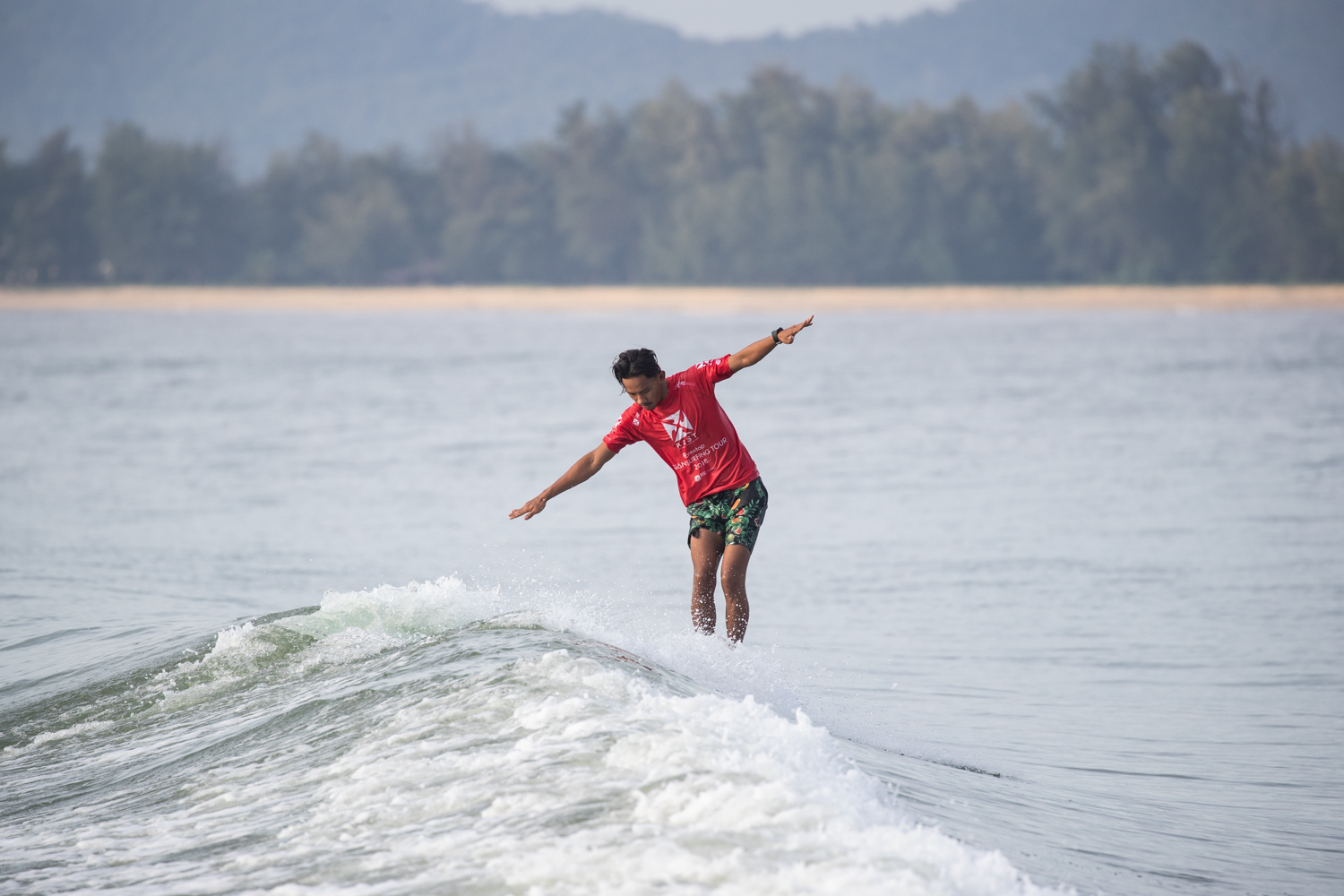 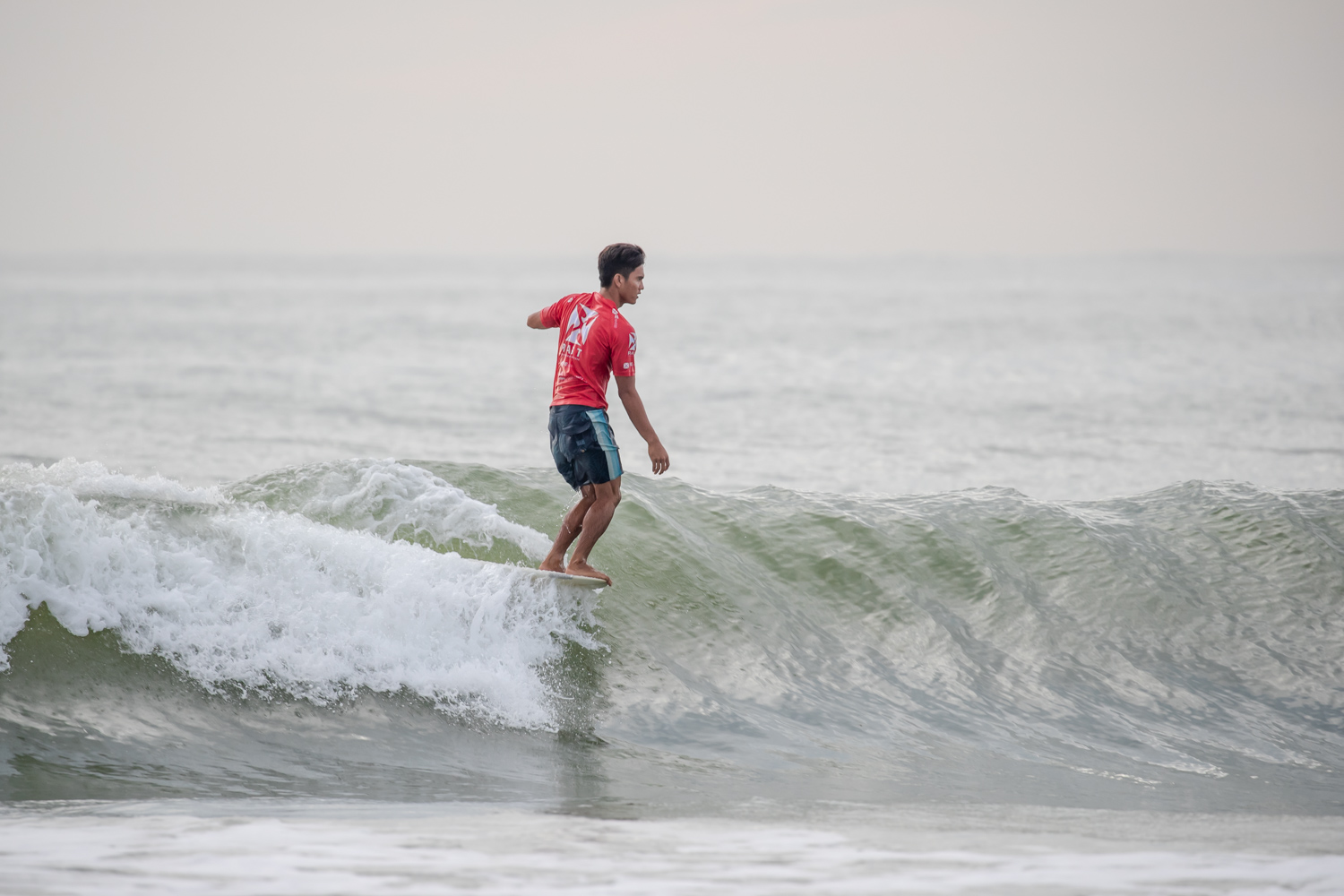 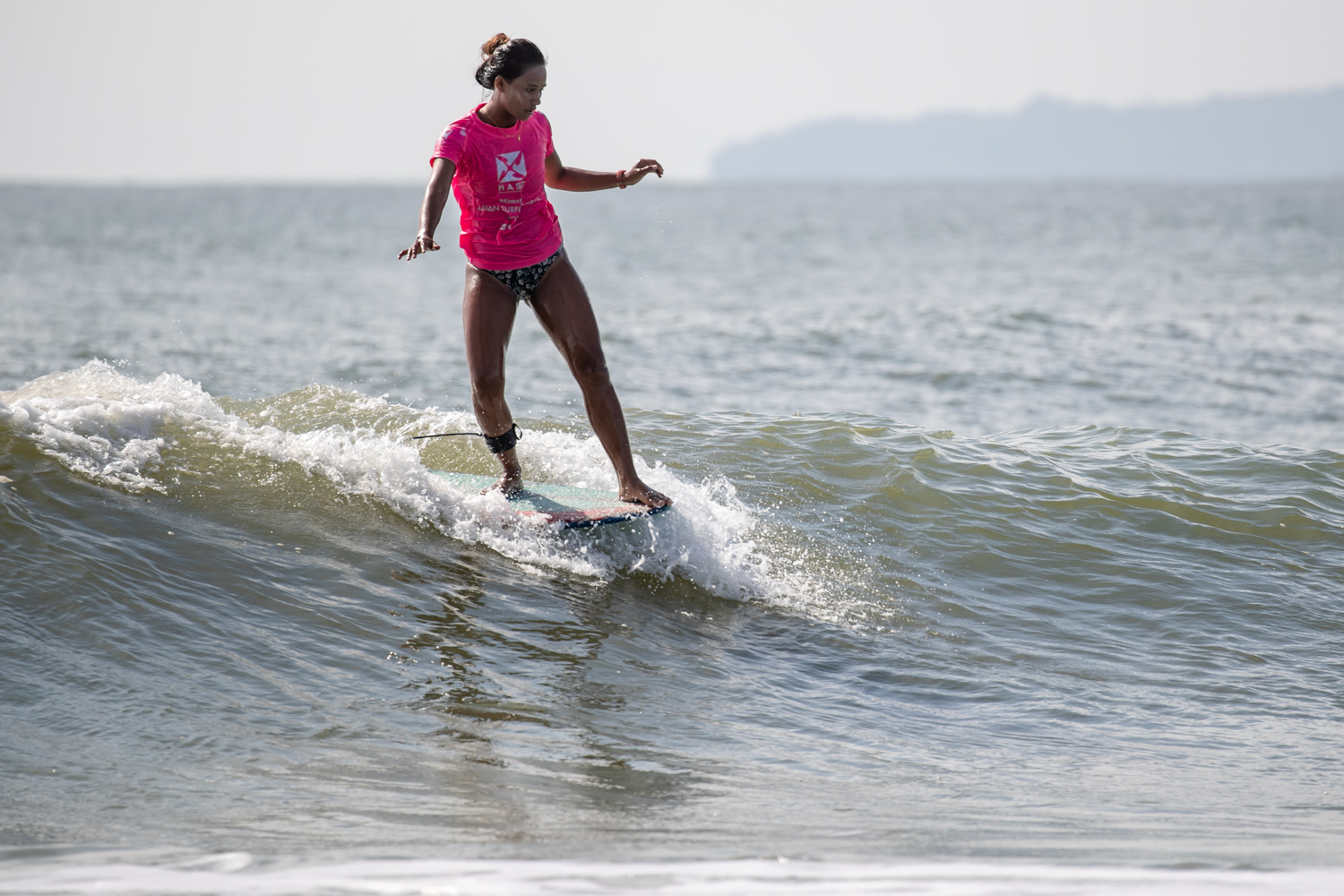 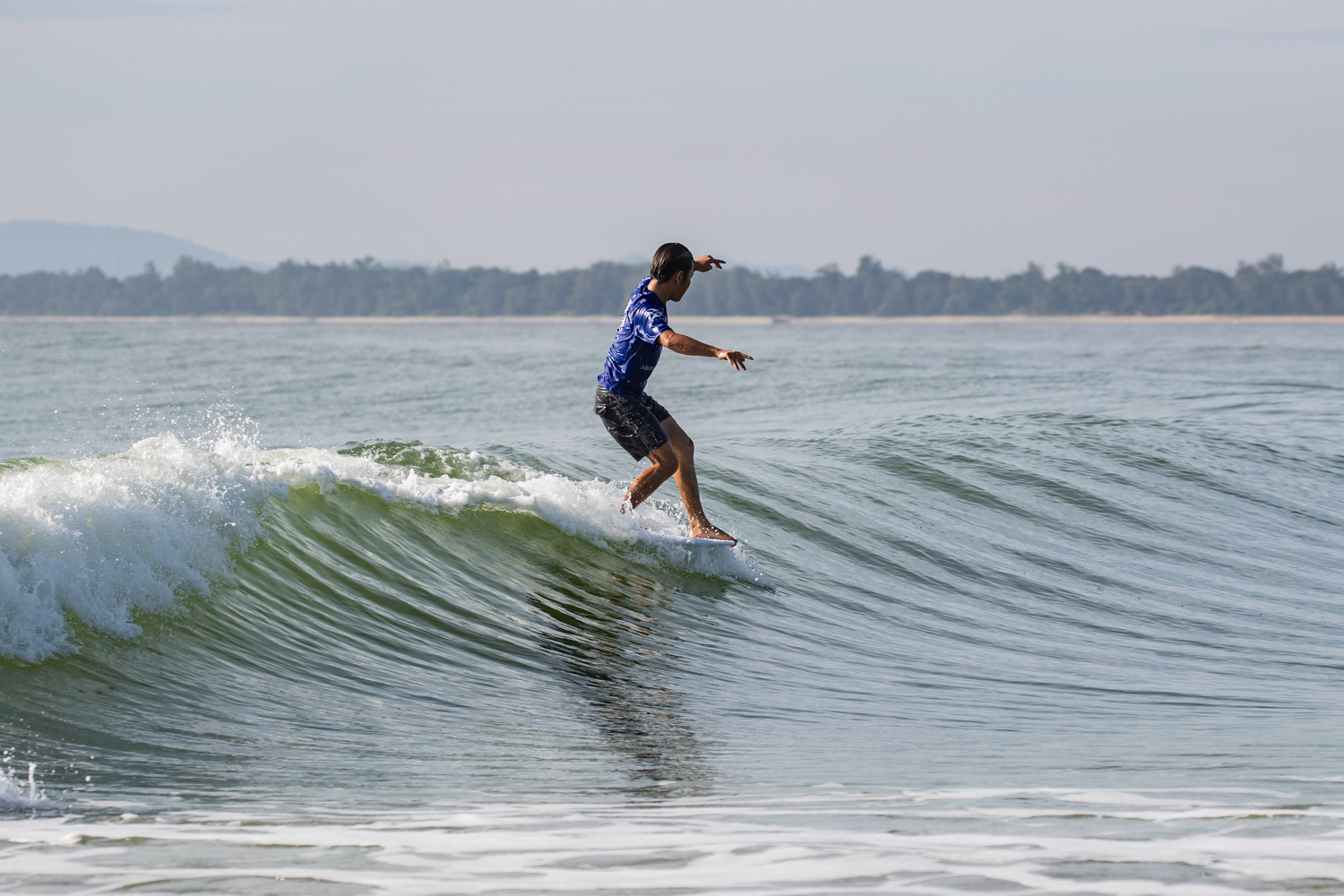 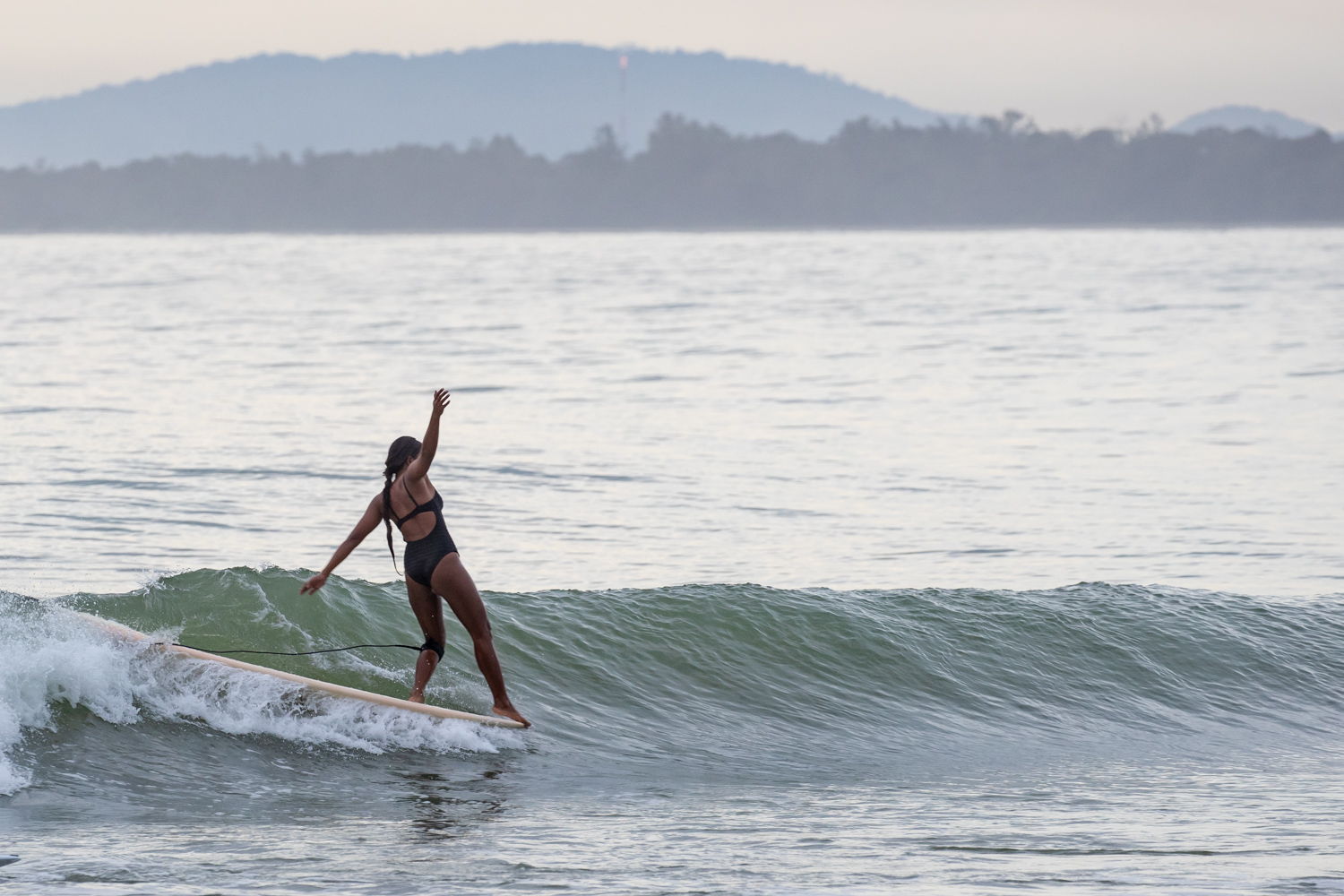 In the Men’s Shortboard Final, it was an all Indonesia affair with Bali’s Raditya Rondi was up against West Java’s Dede Suryana in a battle of familiar rivals

In the Men’s Shortboard Final, it was an all Indonesia affair with Bali’s Raditya Rondi was up against West Java’s Dede Suryana in a battle of familiar rivals, as the two of them have met up in many a matchup during their competitive careers during the Asia Surfing Championship years.  However, Raditya has been to Cherating two times  before, and was the winner of the 2011 Billabong Cherating Pro 7 years ago, whereas this was Dede’s first ever competition at Cherating.

Raditya was in sync with the small and wind affected conditions from his first wave, posting first a mid-range score before smashing out a 6.67 (out of a possible 10 points), which turned out to be the highest single wave score of the final.  He went on to up the ante with a 6.33 for one of the only aerial maneuvers of the day, whereas Dede had limited success finding good scoring waves, his highest single wave score a 3.90.  When time expired it was Raditya with a 13.00 total score to Dede’s 7.5 total score, earning Raditya the victory.

So for Raditya, with a runner up finish at RAST #2 at Phuket, Thailand that netted him 860 points, coupled with his RAST #3 win of 1,000 points, he claims the title of 2018 RAST Men’s Shortboard Champion.

“ I haven’t won an event all year, and that seems like a long time for me,” said Raditya, who is a 3-time Asian Surfing Champion.  “So this is really a great way to end my 2018, not only winning an event but winning the RAST championship also.  It really makes me want to surf and compete again more next year.  Plus I really like Cherating, such a good vibe and crew here, so thanks to them and the RAST guys and everybody for  this event, it’s such a great way to end the year.”

When asked about his strategy for in the final, he explained, “I surfed without a leash because of these small waves it can drag and slow you down, so I had an extra board on the beach waiting in case I lost it…my first board was good for turns and so after I got a couple of good scores and then lost that board, I grabbed the other one waiting on the beach that was better for airs…and then managed to complete a couple airs and that’s what got me the win.”

Runner up Dede Suryana was pleased with his result, as he had no real expectations coming into the event.  “I feel great, as this was beyond my expectation to make it into the final,” said Dede.  “I just wanted to come here and enjoy myself, as this was my first RAST event and my first time to Cherating, although I already know some of the local guys here.  I’m one of the older guys so I was surprised to make it that far into the final.  And being up against Raditya is always fun.  I’m having a great time here, so I want to say thanks to the locals, to RAST, the judges, and all the crew involved in putting on the event!”

In the Women’s Shortboard Final is was Bali’s Dhea Natasya who had the Cherating point break dialed in all event long, dominating both of her earlier heats and then ending up in the final to with a well- deserved first place over the Philippine’s Daisy Valdez and Diah Rahayu Dewi (Bali).

“I feel so happy and thankful to everyone who has supported me and put on these events,” said Dhea when asked how she felt after winning not only the event but also the 2018 RAST Women’s Shortboard Championship.

“I love Malaysia…this is my first time to come here, and the wave here at Cherating is so good…so long.  I can’t even count how many turns I could make on this wave!  I’m tired, but it’s so good, and I’m so happy that I came here.  Thanks again everyone,” she added.

Dhea was the runner up in the RAST #1 event at her home break at Kuta Beach in Bali, and also was runner up at RAST #2 in Phuket, Thailand, so this win sealed her first ever  RAST Women's Shortboard Championship.

High scores from the Men were earned by Deni Firdaus from West Java (7.03 out of a possible 10), and Jay-R Esquivel from the Philippines (6.87), and from the Women it was Natsumi Taoka from Japan with the highest score posting a 7.67 and with a 6.17 already on the board for the highest heat score of 13.84 out of a possible 20 points with the two Agudo sisters Ikit and Aping from the Philippines with scores in the 5 point range.