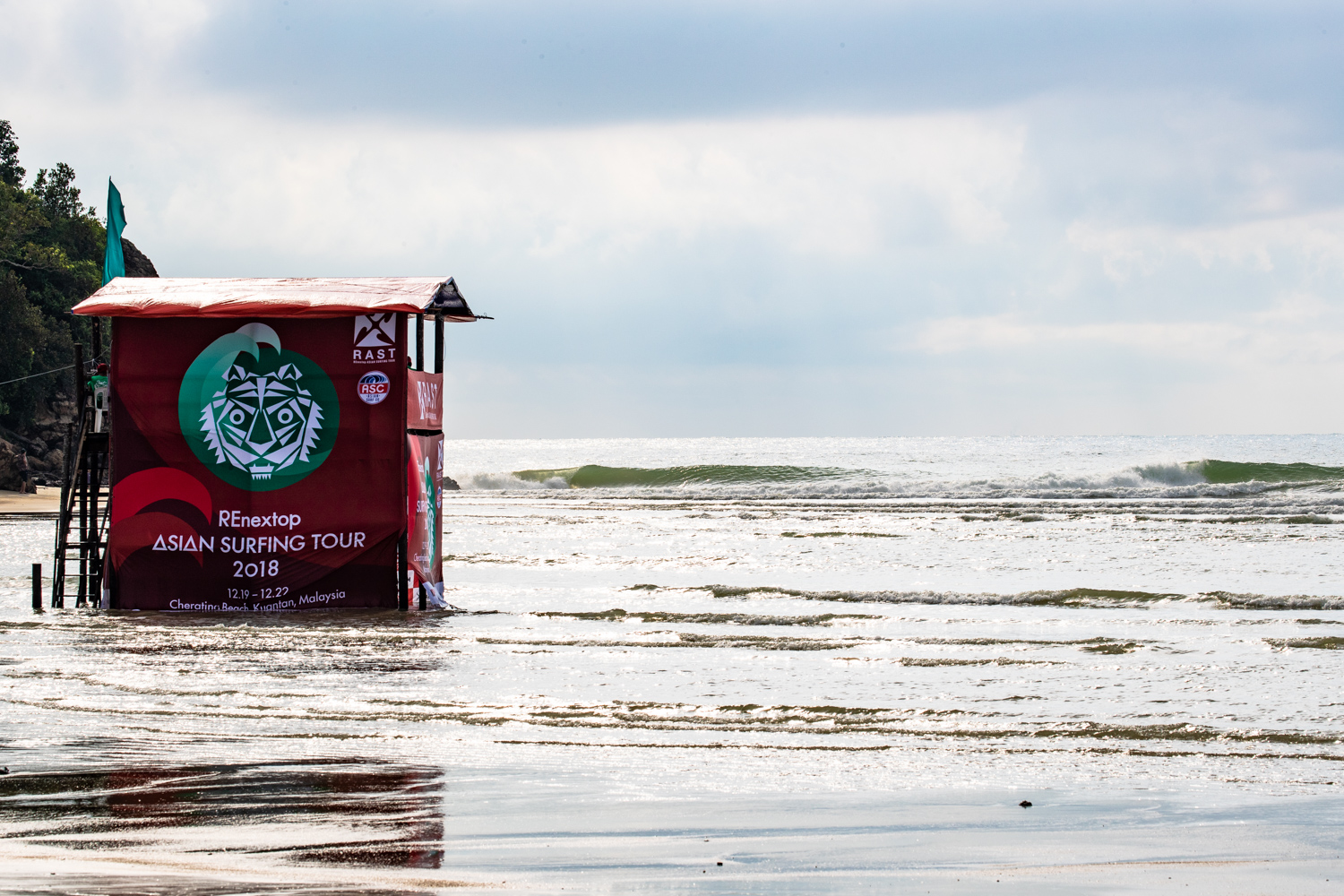 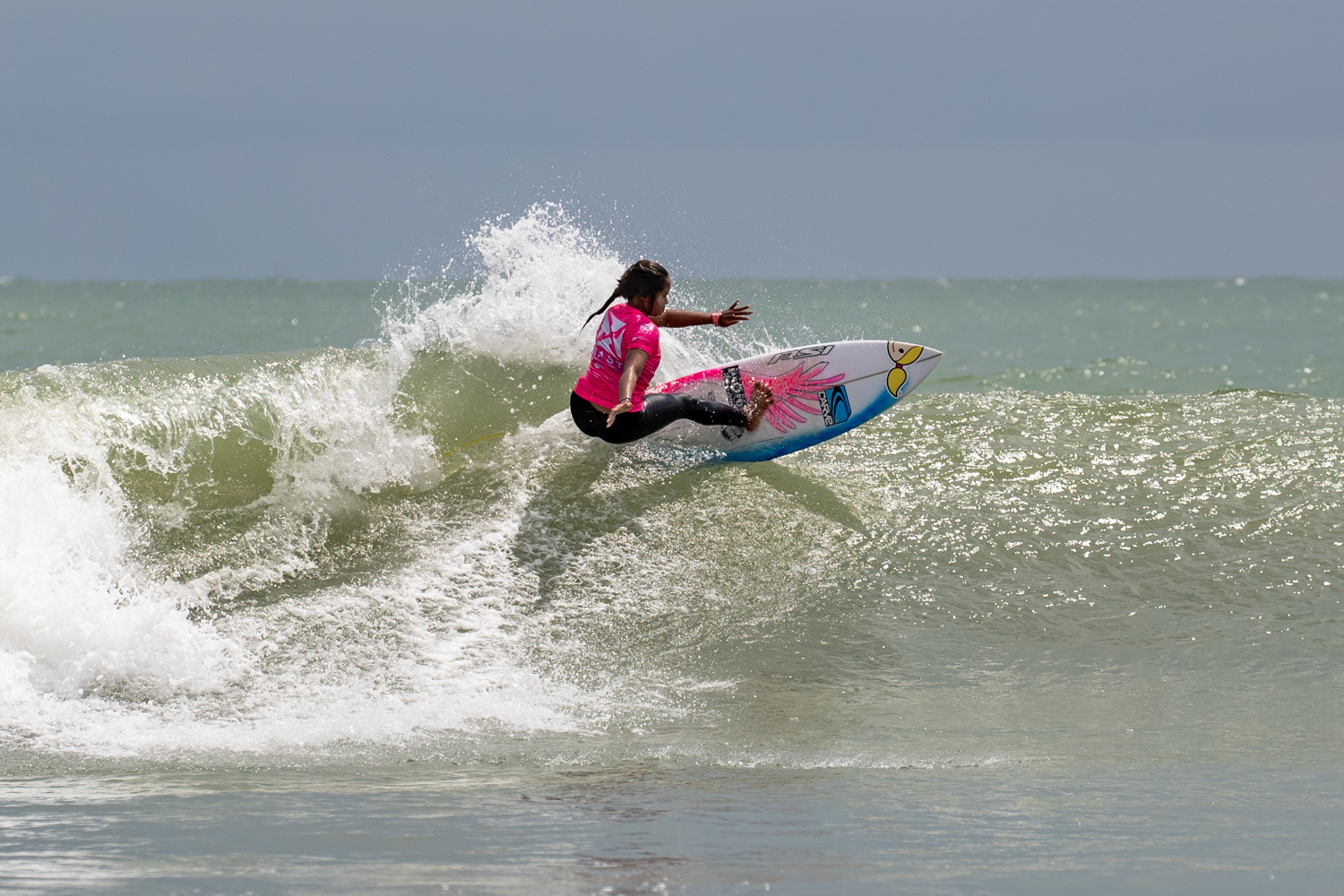 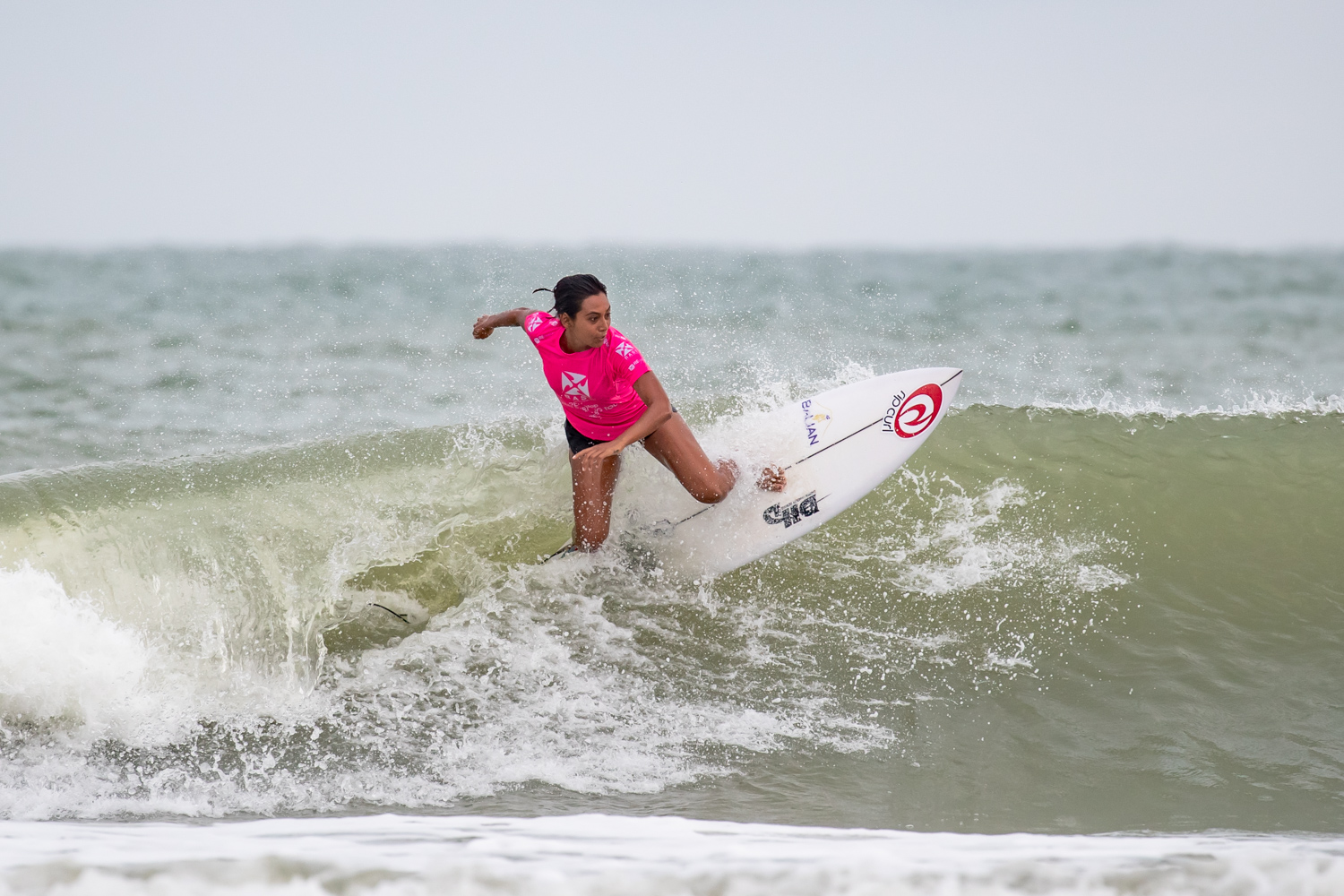 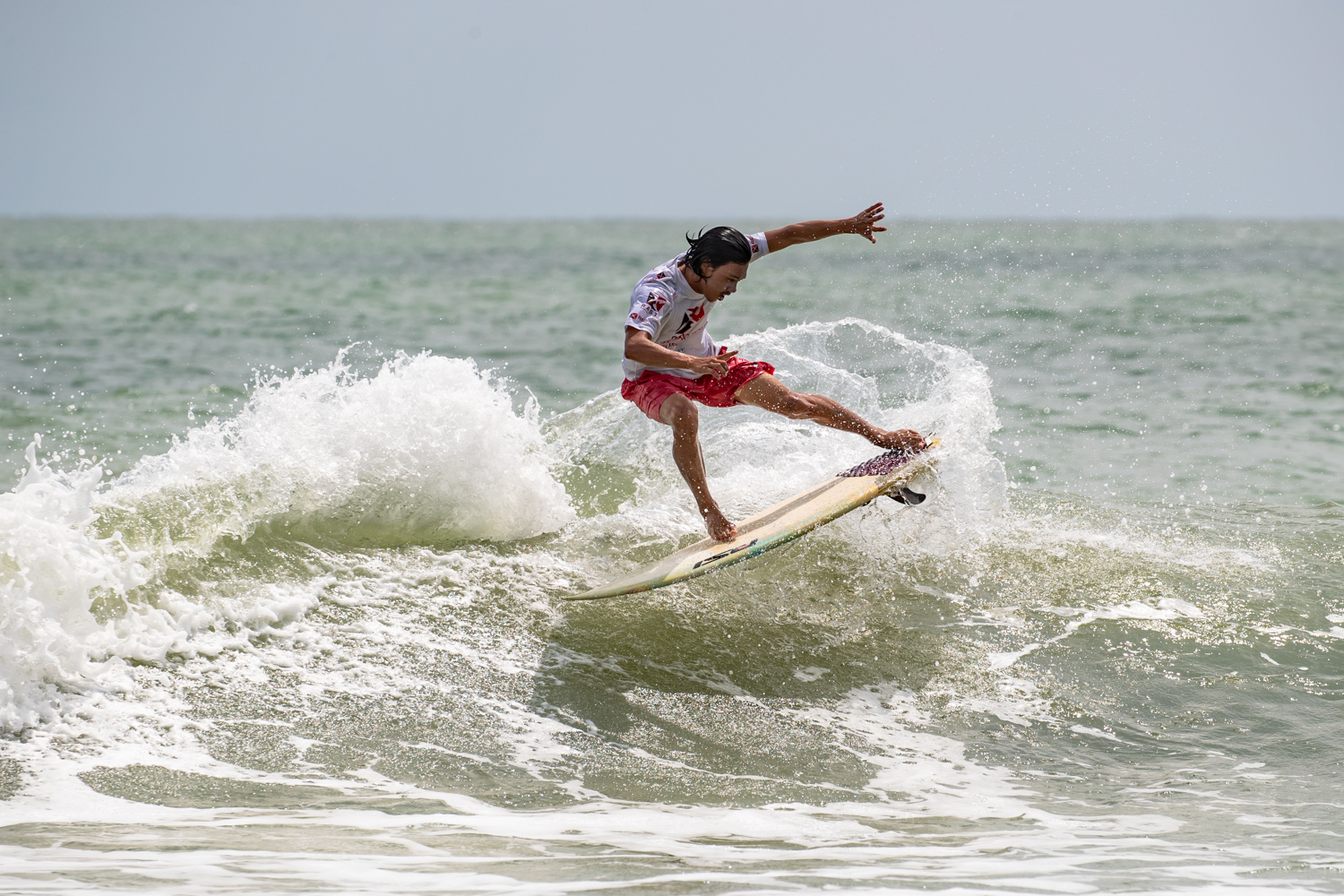 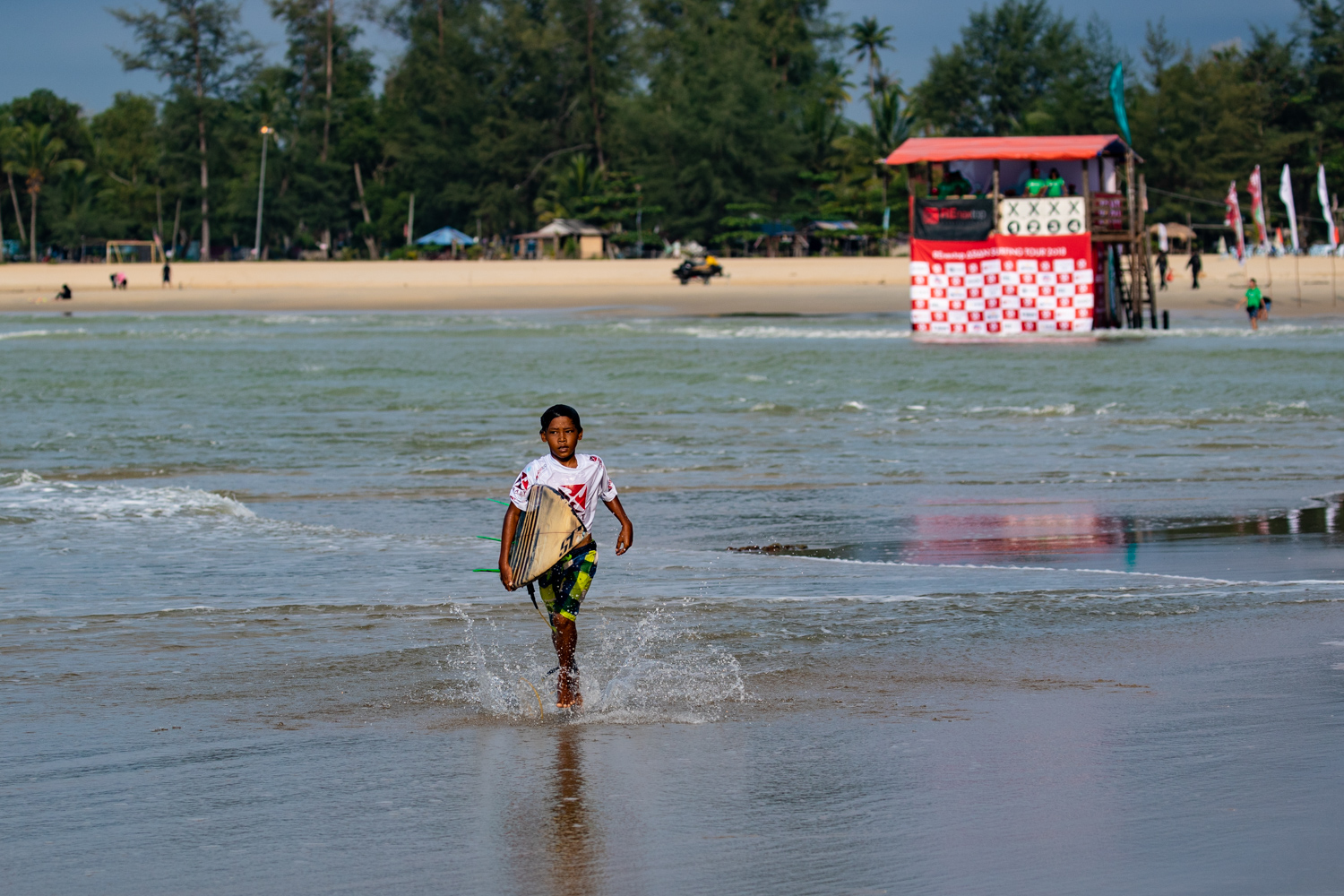 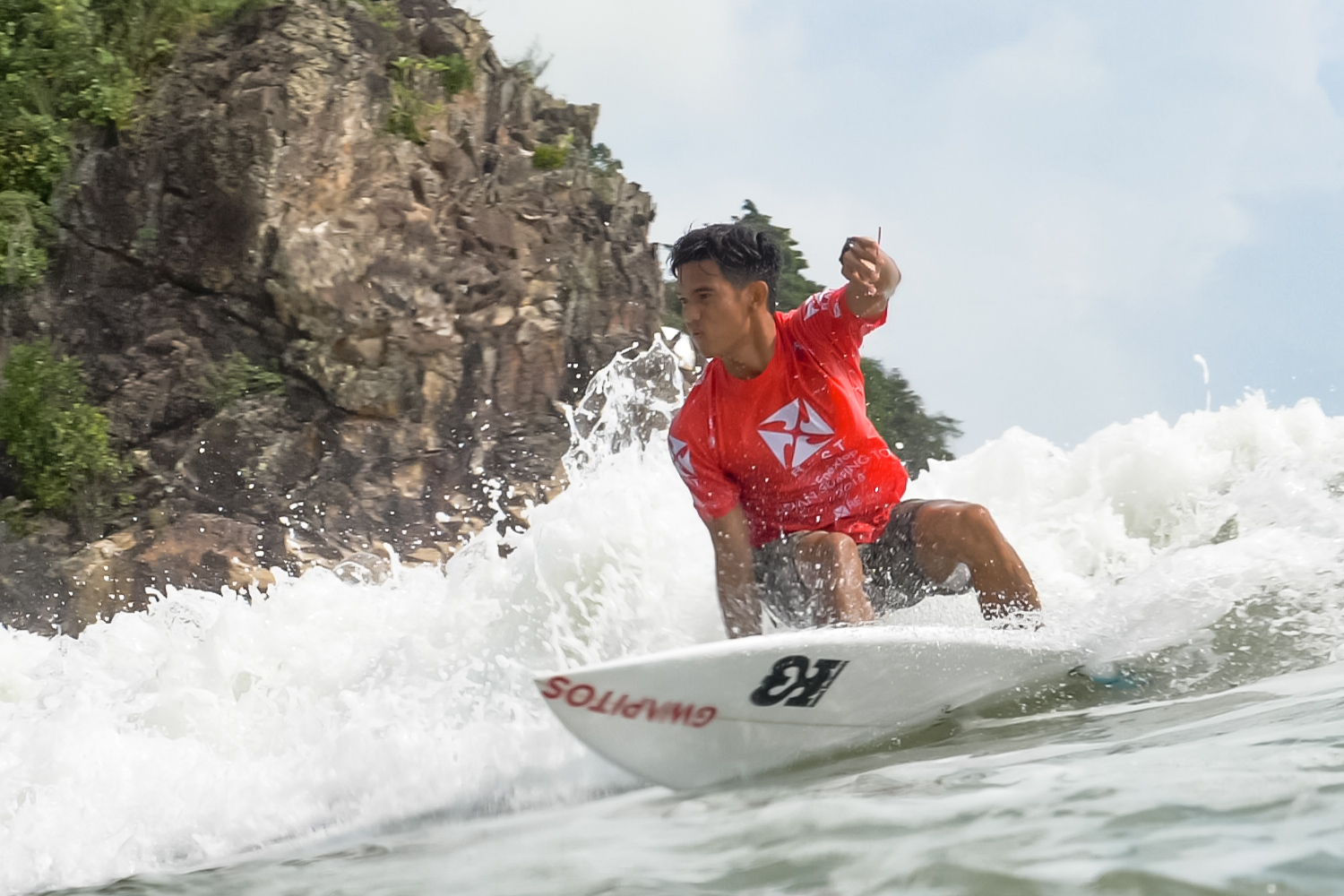 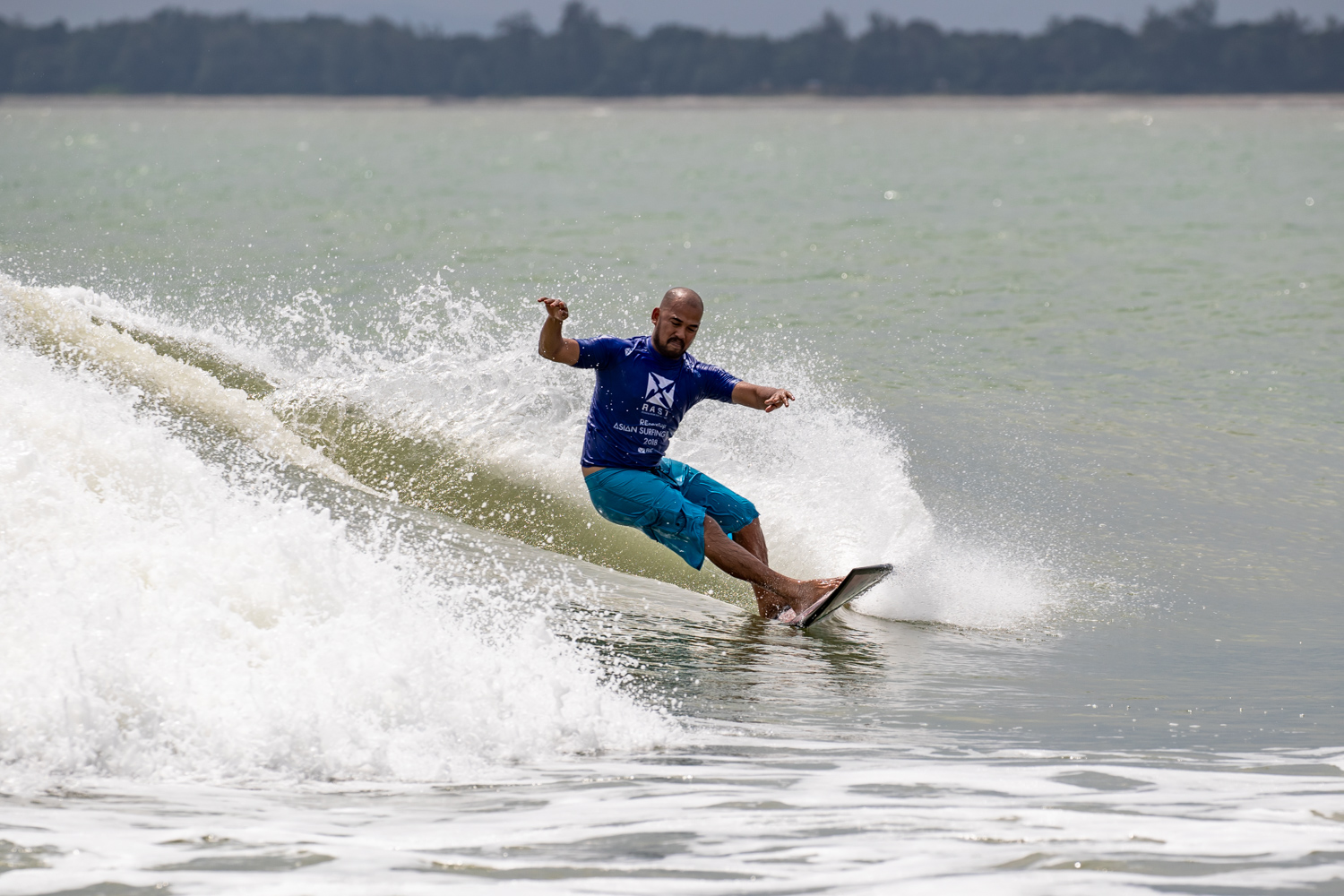 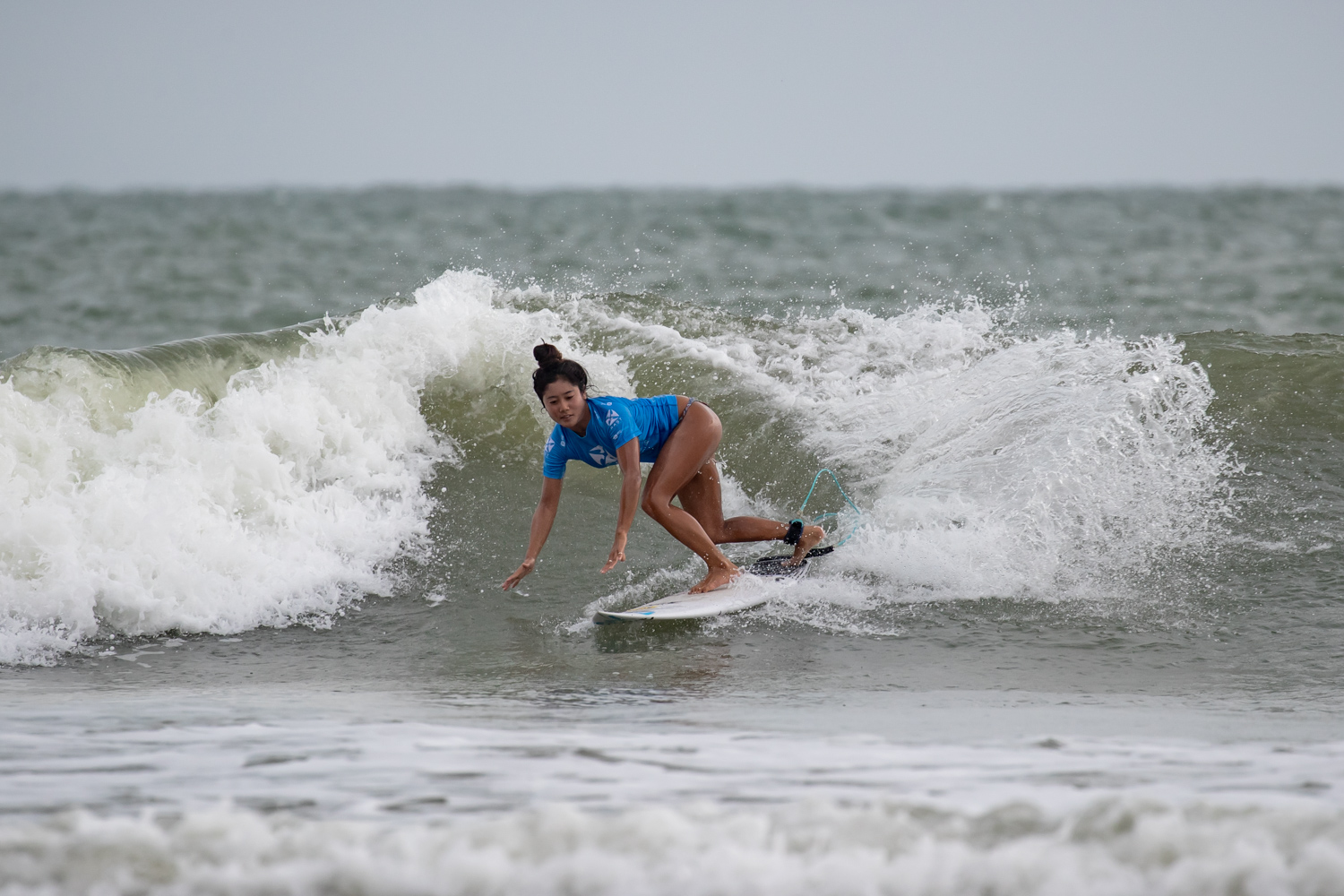 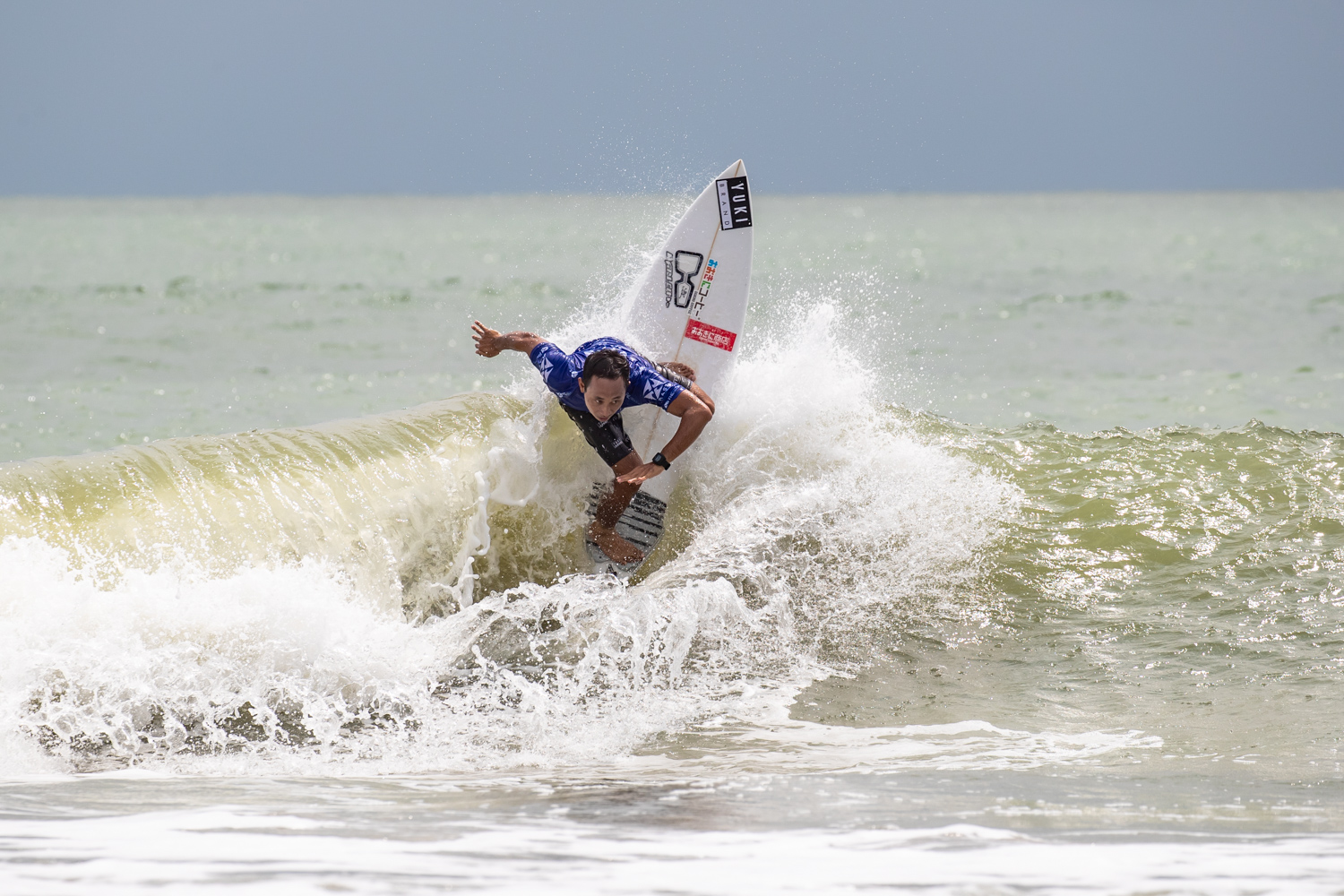 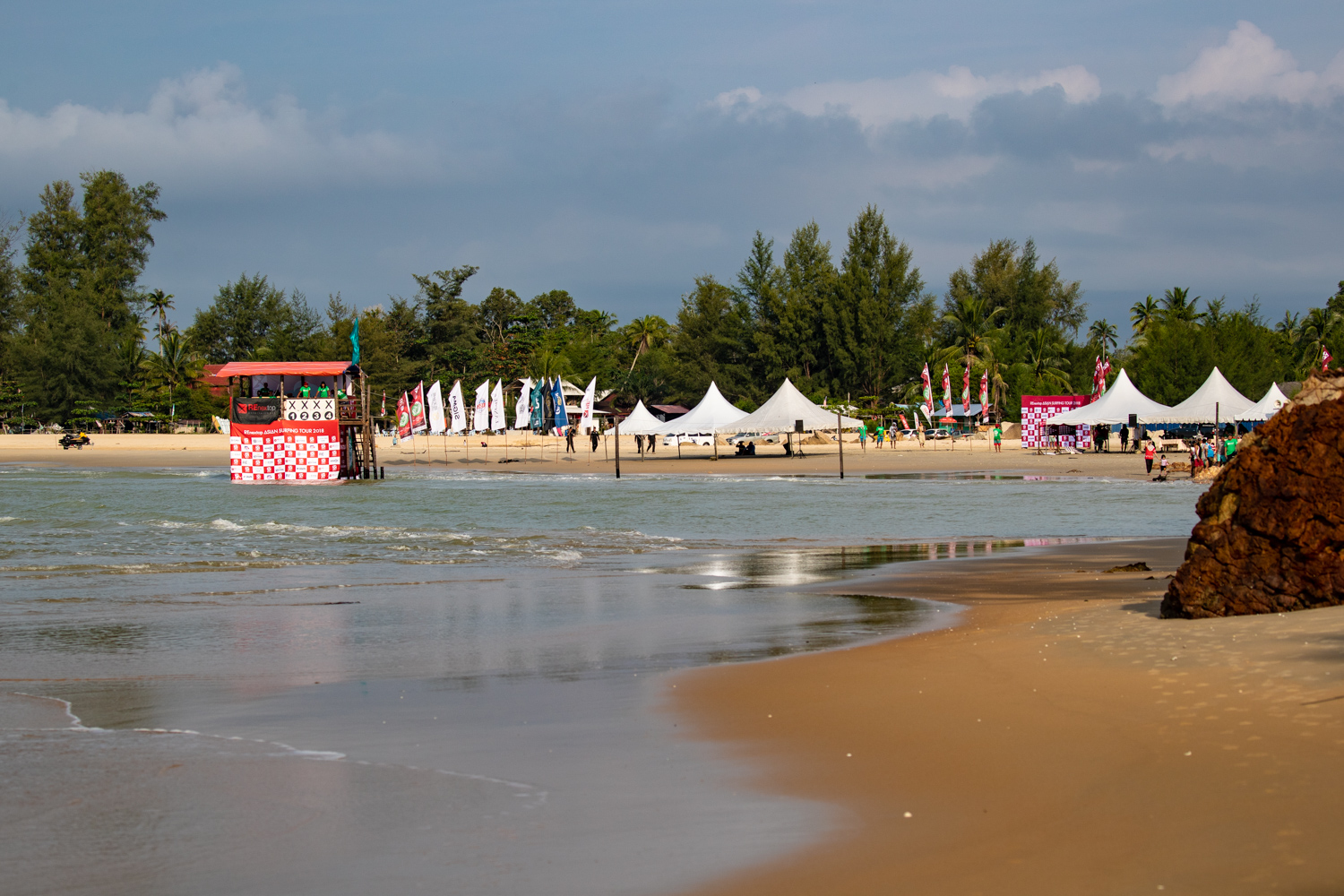 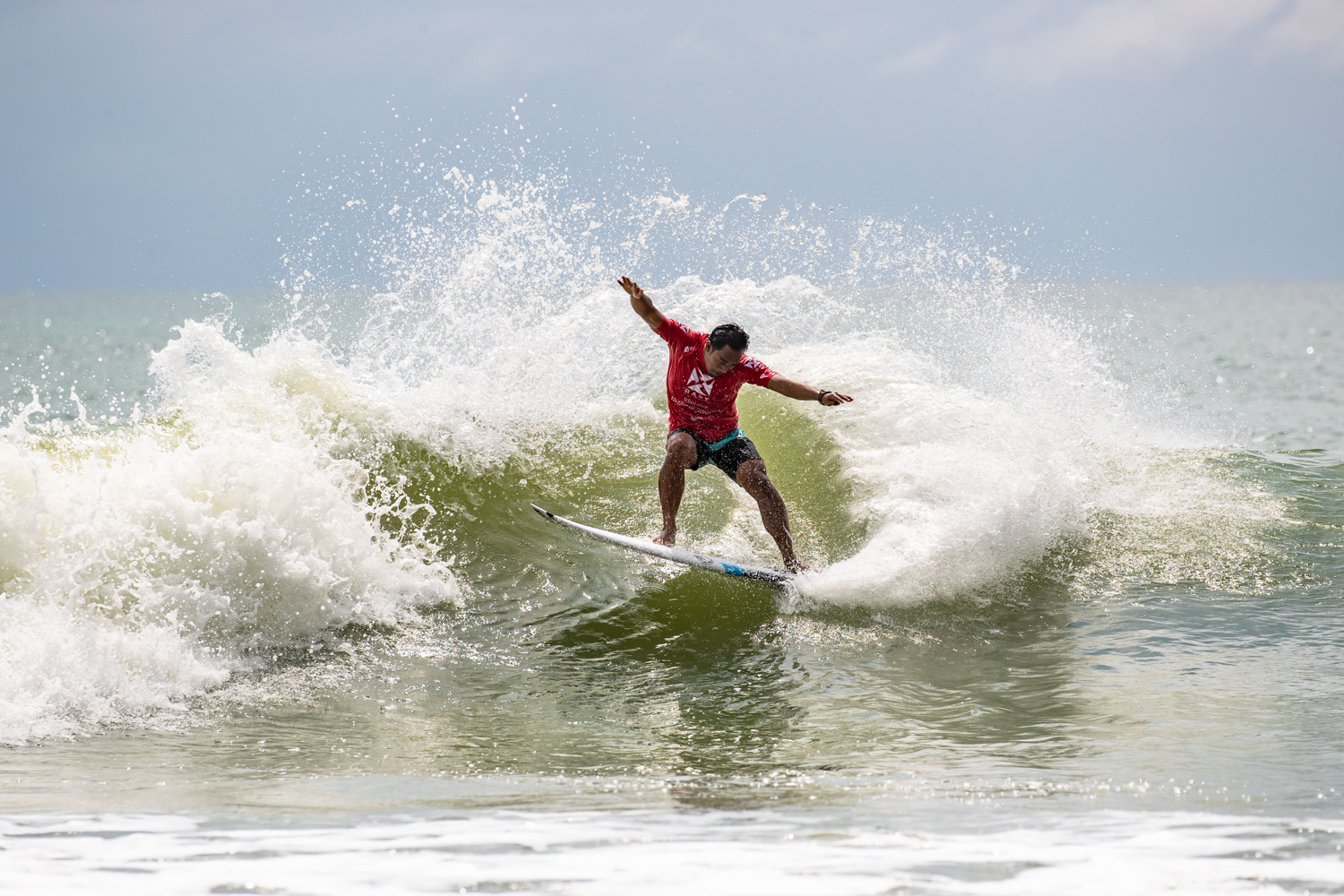 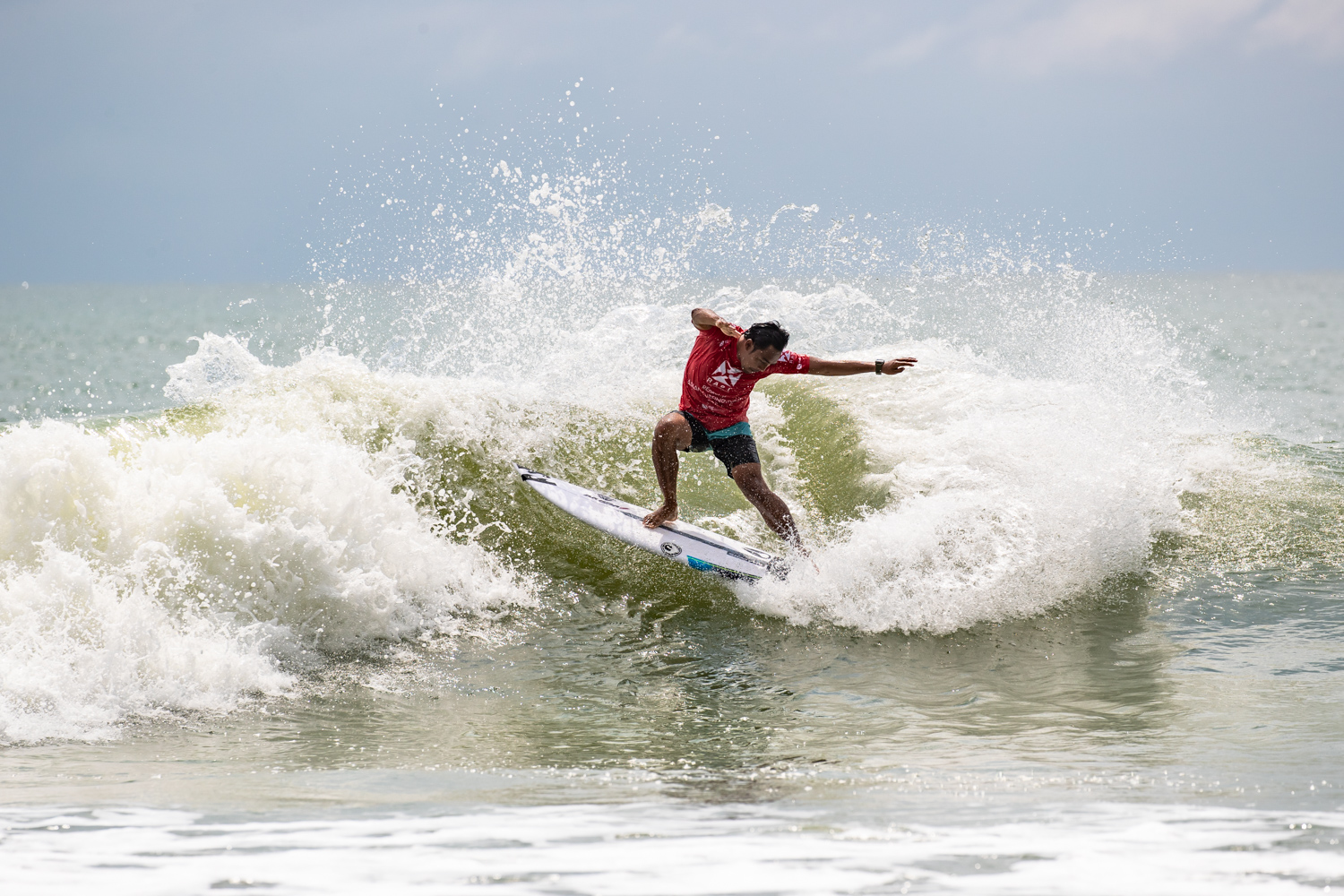 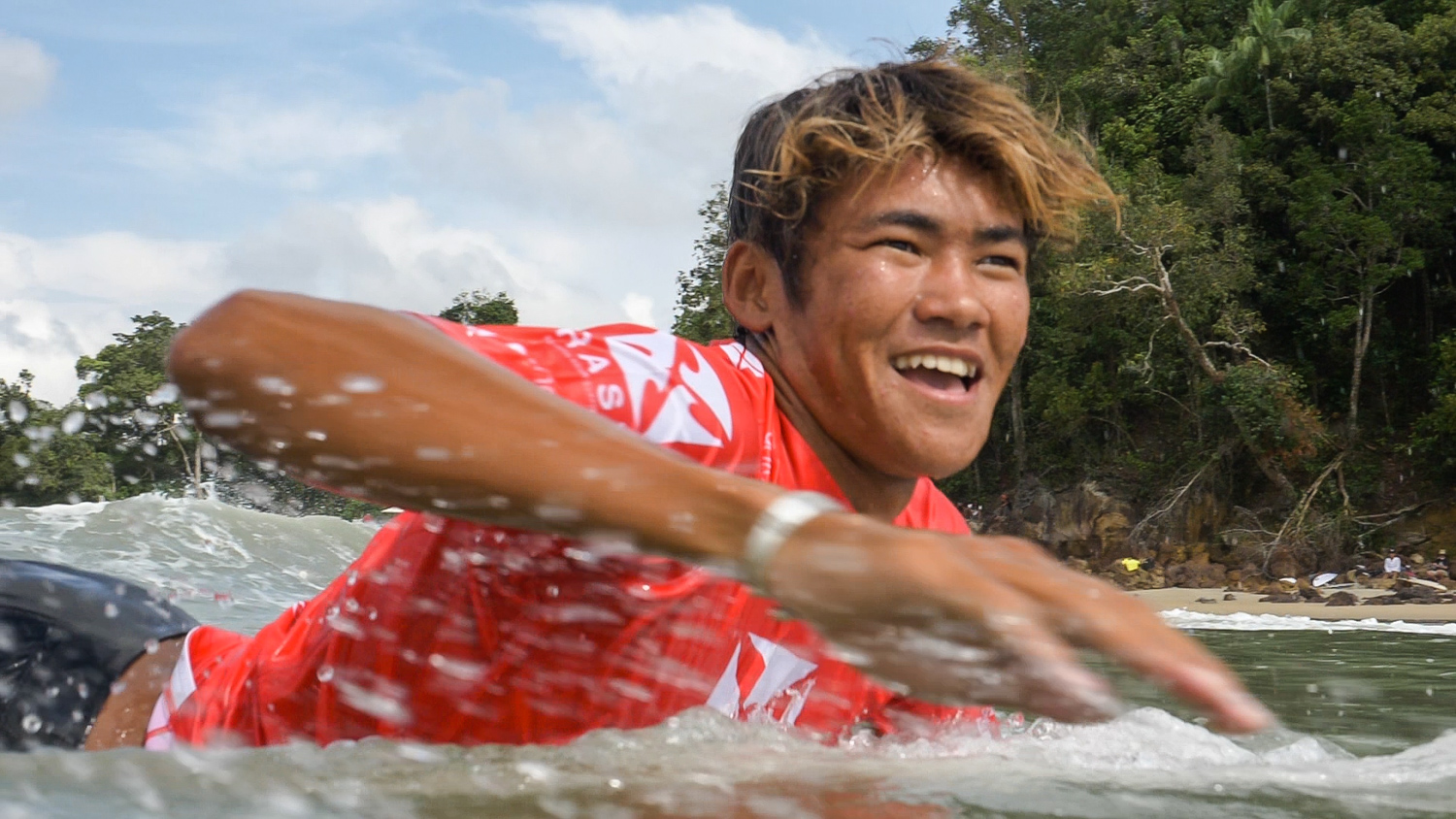 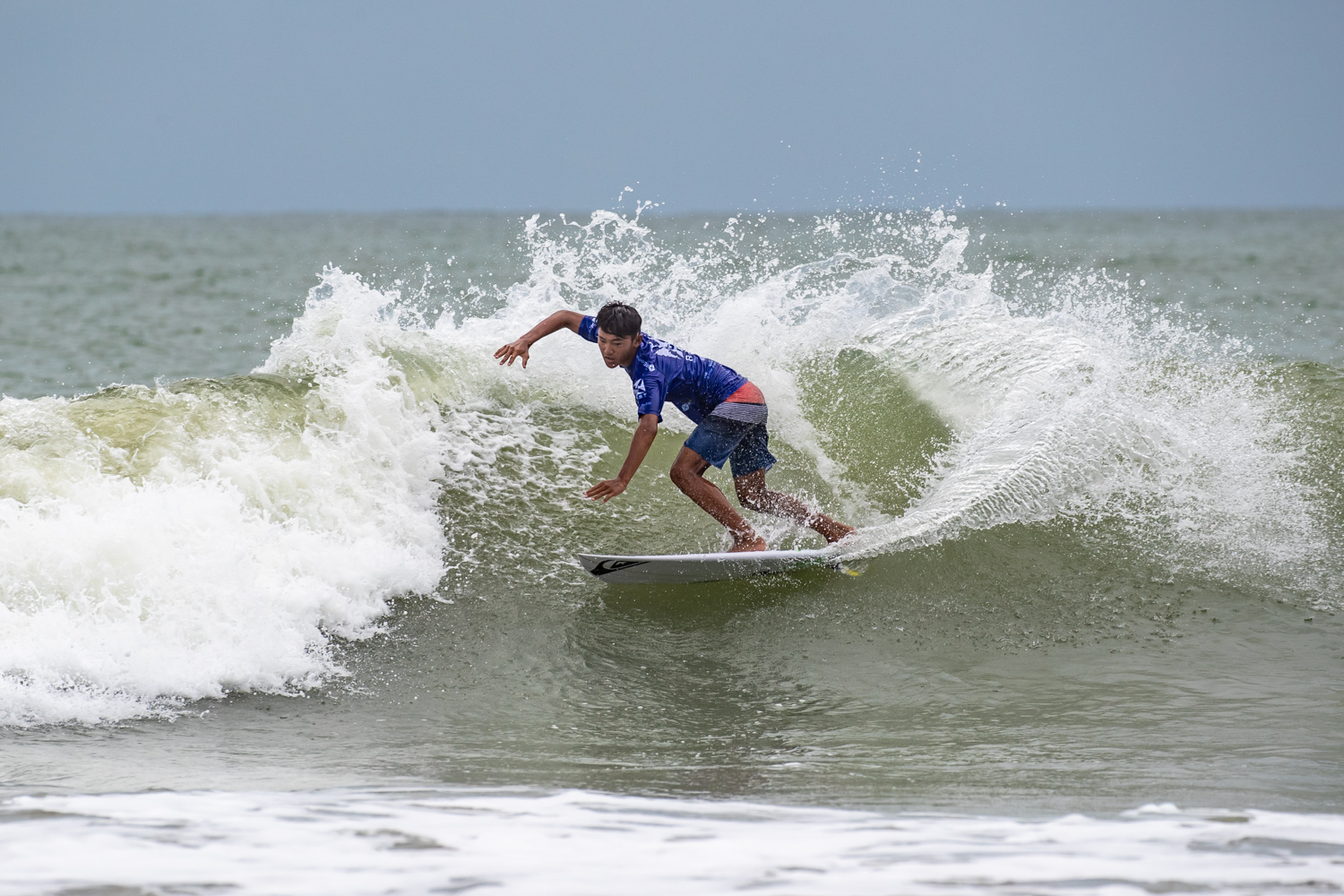 On the opening day of the RAST #3 (REnextop Asian Surfing Tour) event at Cherating Beach in Malaysia, with the South China Sea offering up mostly glassy 2-3 foot surf peeling down the left hand point break,...

it was the Men’s and Women’s Shortboard Divisions that were called into action for what turned out to be a massive day of 22 heats being run, and at the end the Men’s Quarterfinalists and Women’s Finalists have been decided.

Due to last night’s swell forecast, which predicted that today and tomorrow would produce the best conditions for shortboarding, it was decided that the today belonged to the 36 men and 12 women who would be chasing prize money and championship points in this the final event of the 2018 season.

Jay-R Esquivel from the Philippines posted the first excellent score of the event in his Round 3 heat, 8 points (out of a possible 10) for a wave so long that he actually had to pause for a few seconds at mid-point just to let his legs take a few seconds rest before finishing it off.  Jay-R is no stranger to Cherating, having won an Occy Grom Comp that was held here back in 2010.

“I’m really stoked to be back here in Cherating, as I have great memories from that Occy Grom event that I won.  And really happy to get that excellent score and get into the quarterfinals.  This wave is so much fun and I got so many turns in on that one…I can’t wait to surf more tomorrow and hopefully win again,” said Jay-R.

Jay R will be challenging Bali’s Raditya Rondi tomorrow when competition resumes.  Raditya is a 3-time Asian Surfing Champion and won that last ASC event held in Cherating back in 2012, so it should be a great battle of previous event winners and fellow goofyfooters in Quarterfinal 1.

The highest single wave score and highest heat score was posted by Bali’s Rio Waida, who has just returned from Taiwan where he finished equal 3rd in the WSL World Junior Championships, the highest placing ever for an Indonesian junior surfer.

Rio’s smooth flowing transitions between an unrelenting series of powerful backhand hacks on one of the longest waves of the day earned him an excellent 8.67 out of a possible 10 points, which was added onto a previous wave that posted a 6.80 for the day’s highest total heat score of 15.47 out of a possible 20 points.

When asked how he managed to keep such a concentrated attack going for so long and if his legs were tired he replied, “My legs are fine, as I train by running every day, so they are pretty strong,” Rio replied.  “Sure, they did burn out a bit but in between sections they got a few seconds rest so it was fine.  Plus I knew that Jay-R got an 8 in the last heat, so of course I wanted to do better than him, so I when I found that really good wave with a long wall I smashed it as hard as I could and tried not to fall.  This is a really great place and I’m having fun with the locals and all the Bali boys here, so I’m stoked I made it into the quarters and hopefully I’ll get into the final.”

In the Women’s Division the 12-women field was narrowed down to just 3 competitors by the end of the day, with series leader Dhea Natasya from Bali besting RAST #2 Women’s Division winner Natsumi Taoka from Japan in Quarterfinal 1 with an excellent score of 8.33.  Dhea has runner up finishes in RAST #1 (Kuta Beach, Bali) and in RAST #2 (Phuket, Thailand) so is looking to end this event with a win to cap off her best competitive year yet.

Also in the final, which is slated to be held tomorrow, are the Philippine’s Daisy Valdez and Bali’s Diah Rahayu Dewi.  Daisy would need to win the event to claim the Women’s Title.

In the race for the Men’s 2018 Championship, Bali’s Darma Yasa “Bleronk” was leading going into this event, but was unfortunately knocked out in Round 3, so still in the running are his twin brother Darma Putra Tonjo (Bali), Raditya Rondi (Bali), Jay-R Esquivel (PHL), and Rio Waida (Bali) who could each take out the series with an event win.

Mohammad Didaqt was Malaysia’s highest placing surfer in the Men’s Shortboard division, making it into Round 3 but failing to advance into the Quarterfinals.  But he was still smiling, saying “The tide was a bit high during my heat, so there weren’t as many waves, but hopefully there will be good waves tomorrow.  I’m not disappointed at my result, because I’m happy that all these international pro surfers are here so they can show the local groms how to perform at a higher level.  It was great to compete with all the Bali boys again, it’s been awhile, and hopefully next year there can be more international competitions here in Cherating.”

You can check the scores live on Live Heats during the competition at https://www.liveheats.com/events/1227