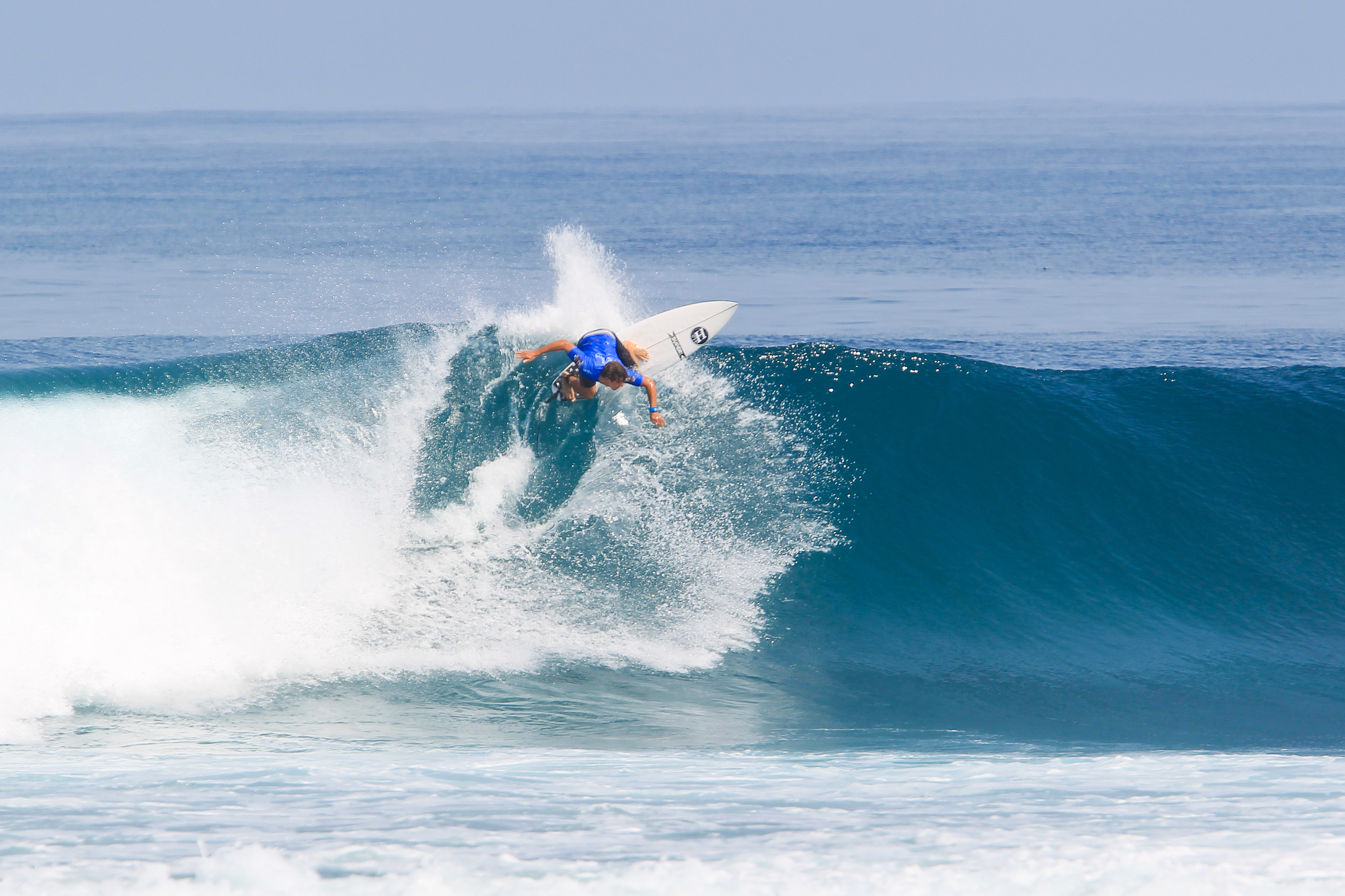 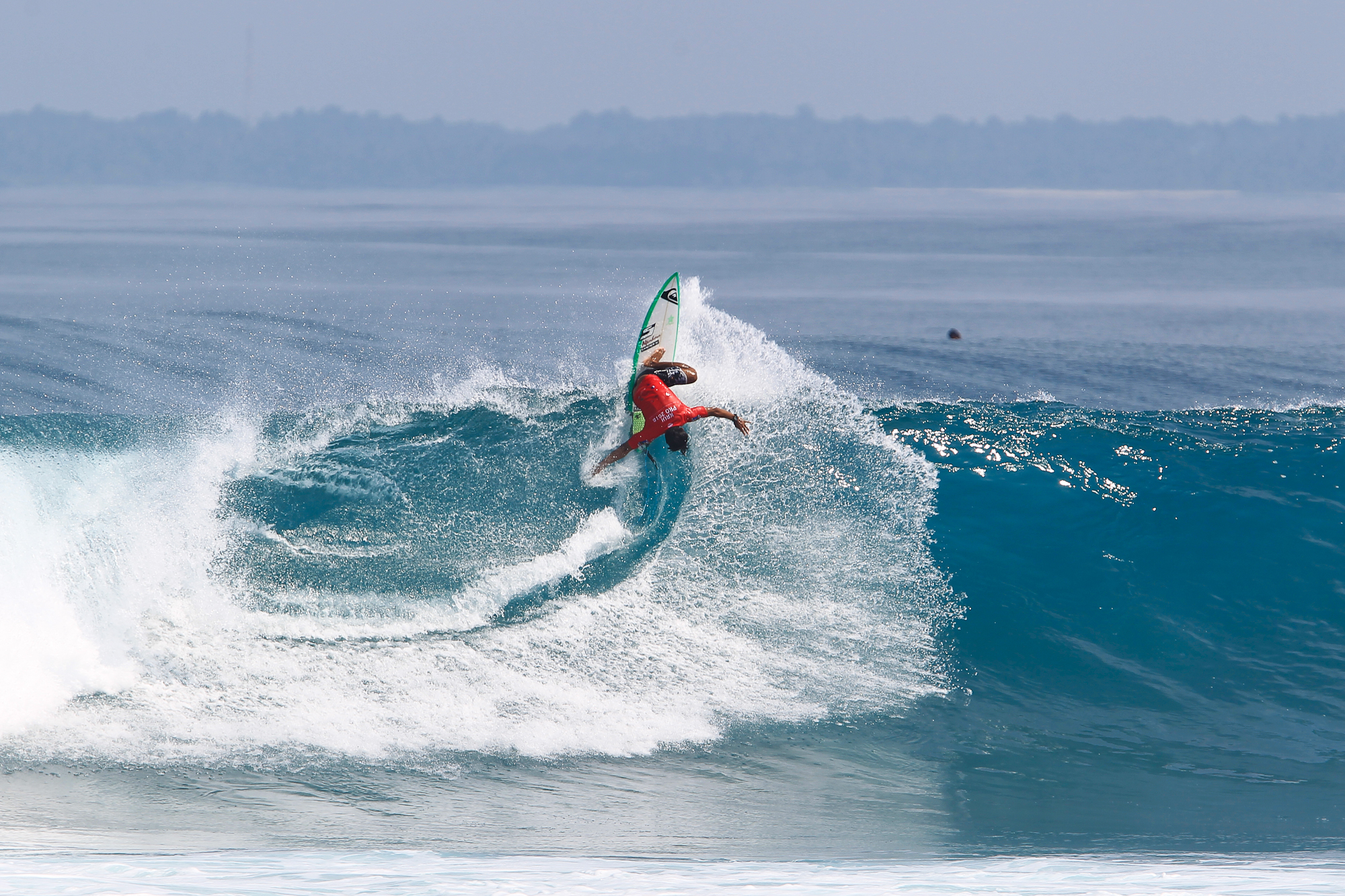 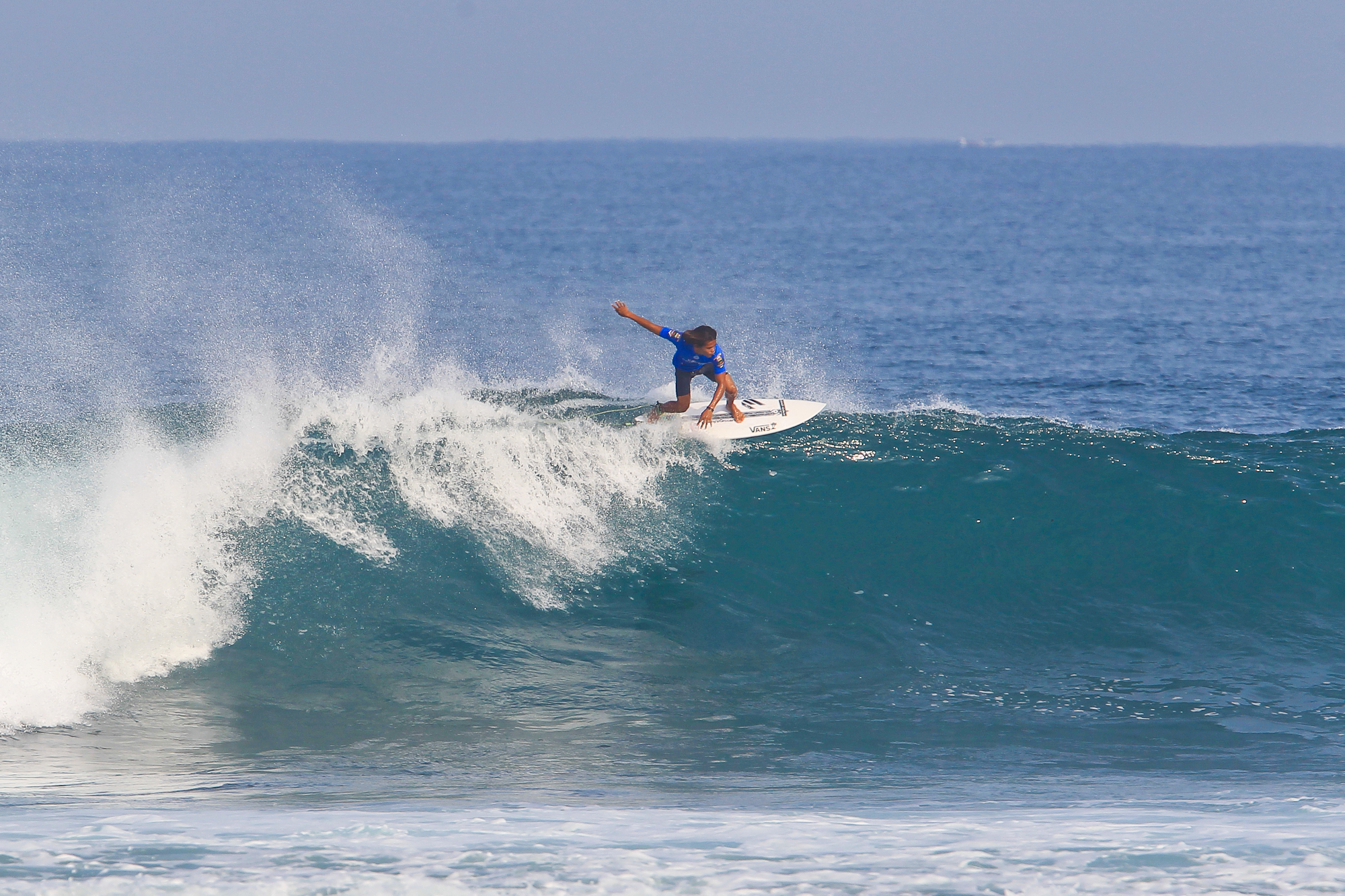 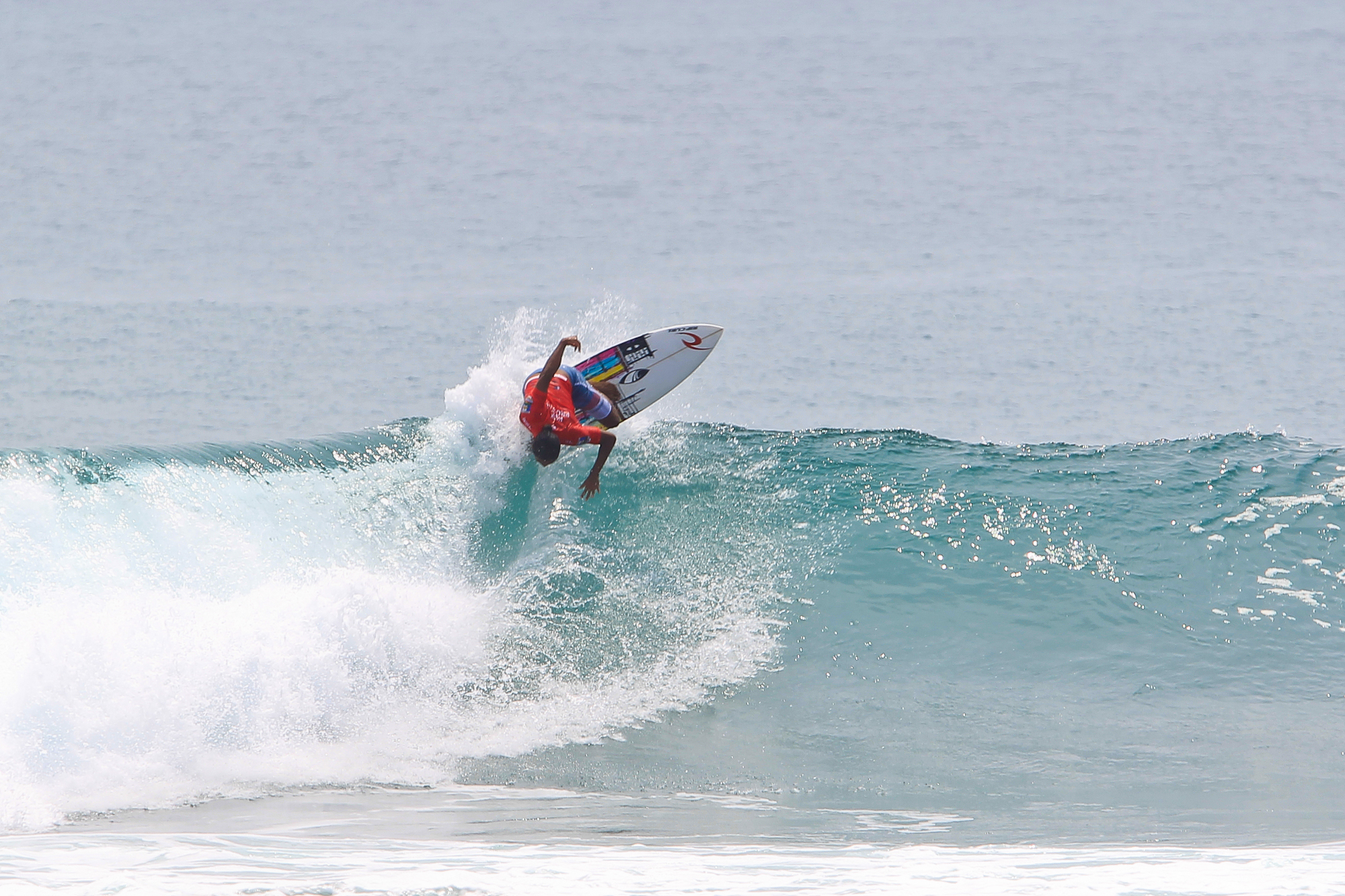 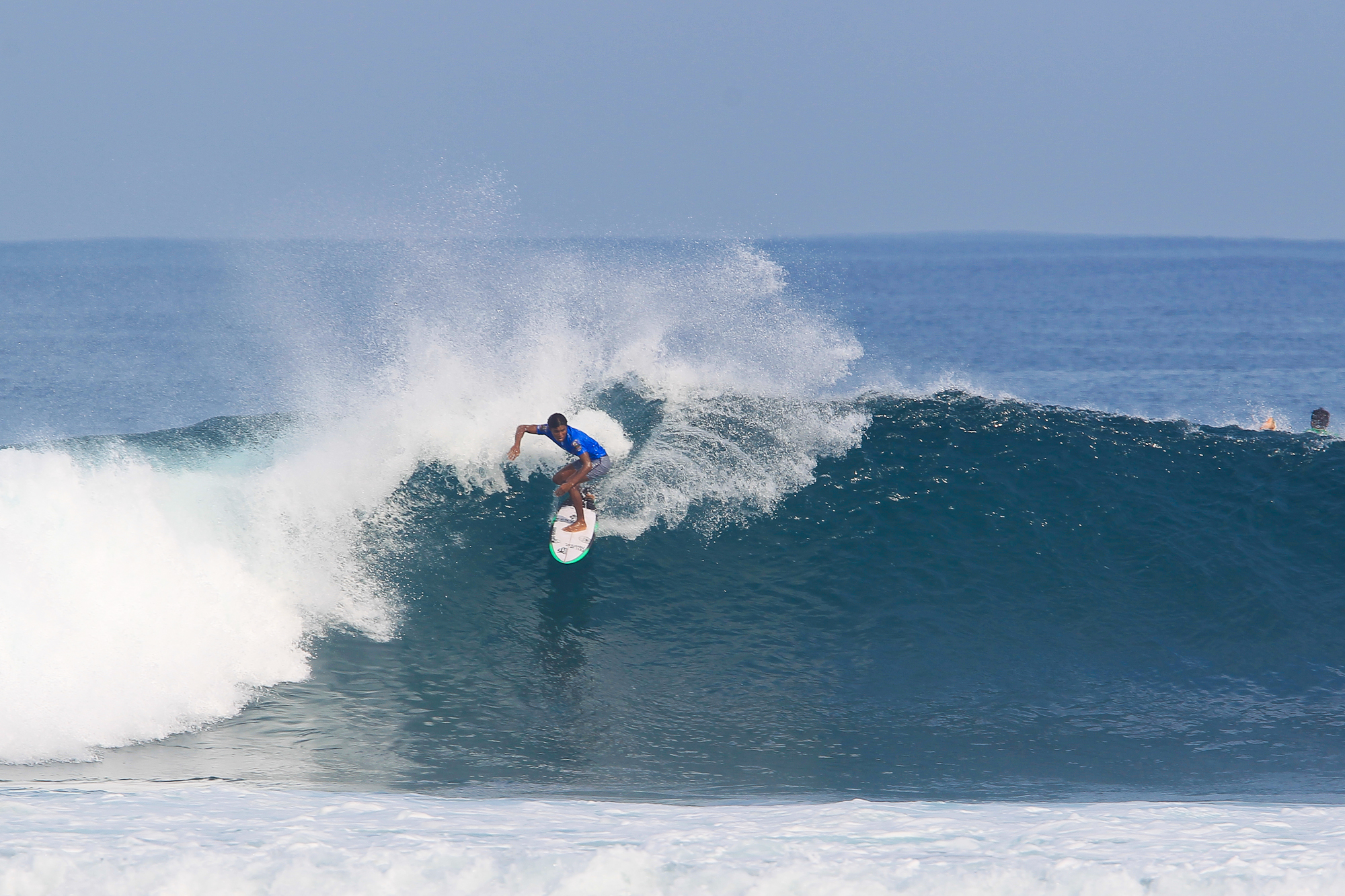 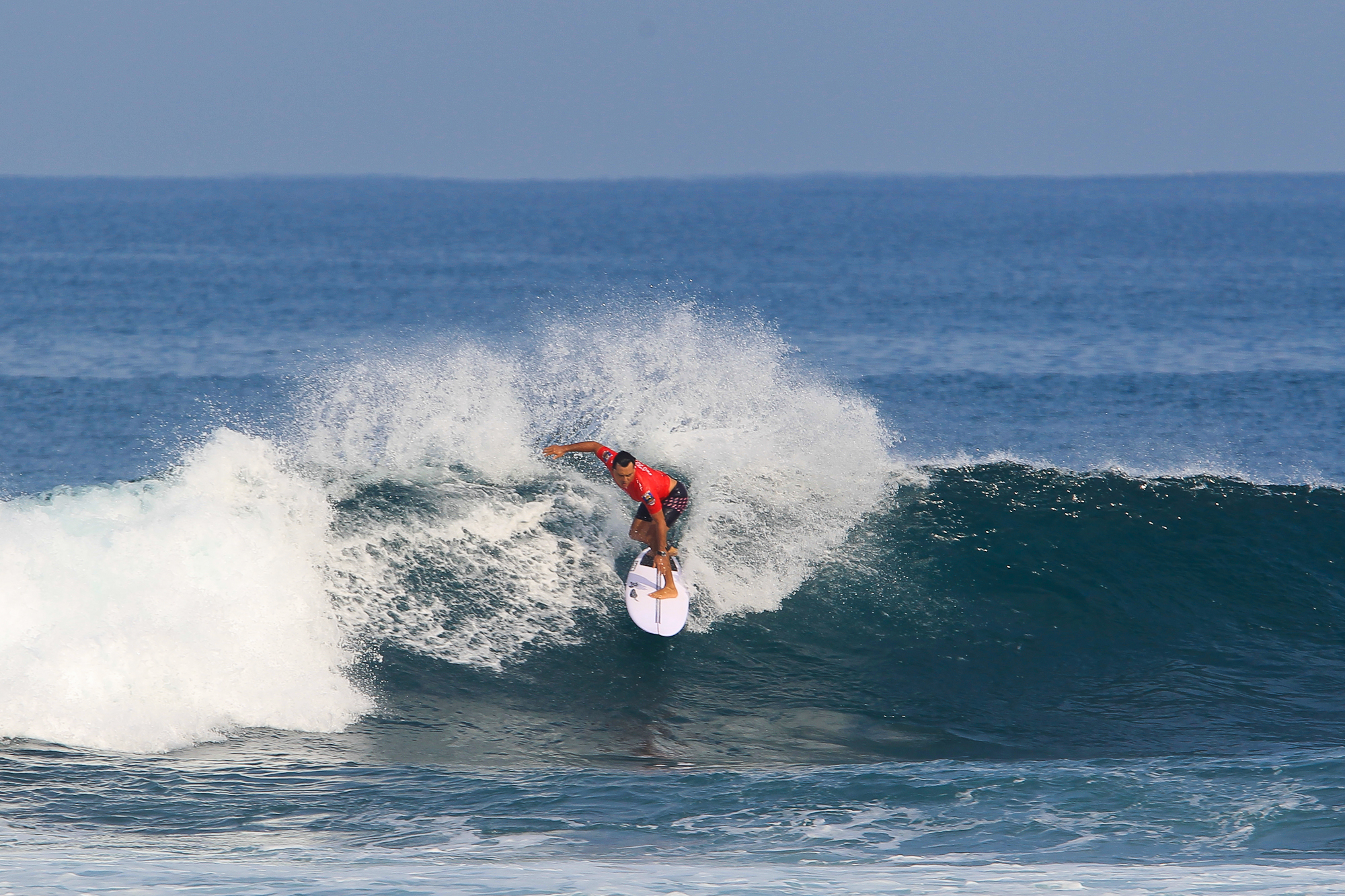 ...long left-handers on offer for the eager crop of professional surfers from all over the globe. The call was made to run men’s Round 1 and the first half of Round 2 of the men’s QS1,500 division while the women’s QS1,000 was called off for the day.

Nyoman "Mega" Artana (IDN), the young Balinese prodigy, continued to show the form he displayed here from last year when he finished a career high 3rd place at this event. Artana scored one of the highest single waves of the day — 8.75 for a series of fast and critical carves and snaps as the local crowd cheered on their countryman.

“I am really excited to be back here, I love this place,” Artana said. “I was so excited when that wave came, I knew that if I surfed my best it would be a good score. So happy to be here, I am having fun hanging with the older guys and I also like making new friends with all the international competitors.”

North Narrabeen’s David Vlug won through Round 1 and 2 with impressively powerful surfing at Krui today. Vlug enjoyed the long lefts as he was able to link together combinations of turns that wasn’t possible at some recent events held at beach-breaks.

“It felt so good to get out there in some perfect and powerful surf,” Vlug said. “I had a while off competing and since I’ve come back I haven’t had a big result so it’s really good to be making heats like that in good waves. Hopefully I can get the ball rolling and post some big scores in the next round.”

Oney Anwar is hunting for a huge result at the Krui Pro so he can secure the highest ranking on the QS out of all the Indonesian surfers to get the Wildcard into the up-and-coming Corona Bali Pro Championship Tour event. He looked sharp on his backhand, easily progressing through his opening heat in first position.

“The waves were so fun out there,” Anwar said. “There was a little wait between sets, but when they came they were so good it was hard to not get too excited. I would love to get the wildcard into the Corona Bali Pro but I can’t think that far ahead, I just need to focus on one wave at a time.”

Gabriel Villarán is competing for the first time after breaking his tibia at Pipeline last year, but showed no signs of slowing down, posting one of the highest waves scores of the day — 7.75 out of a possible 10. Villarán waited patiently and pounced on the best waves of the heat, executing precision sharp backhand hooks all the way down the line to claim an impressive heat win.

“This is my first event since breaking my tibia at Pipe last year,” Villarán said. “It felt good to go in a contest in small but perfect surf. I love big waves, but I also really like surfing in events like this too, who wouldn’t? Perfect surf in Indonesia, it’s what every surfer dreams about. I had a strategy to get a score early to take some pressure off, then I could try and push harder to get a better score and it seemed to work out for me.”

Harley Ross was the standout performer of the opening day, scoring the highest single wave — 9.20 — for a series of five committed and critical backhand blasts. The young Australian from Sydney’s Northern Beaches looked right at home in the long lefts at the Krui Pro and will be one to watch as competition continues this week.

“That wave felt so good!” Ross said. “I almost fell on every single turn, but I just kept going. It feels good to post a big score. I was relaxed and it seemed to work out for me. I’m loving this event so far, hopefully we have waves like that all week.”

RESULTS ROUND ONE AND ROUND TWO KRUI PRO 2018: 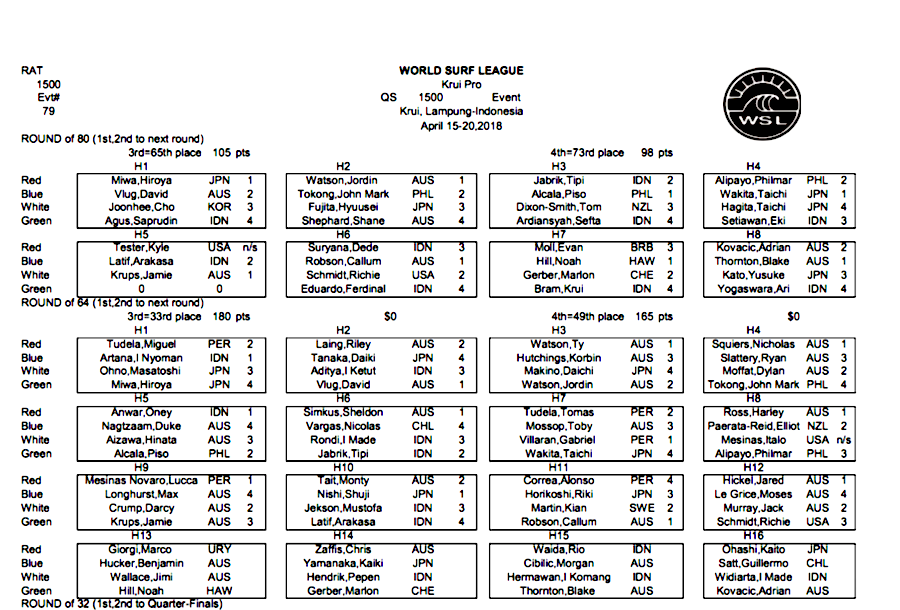