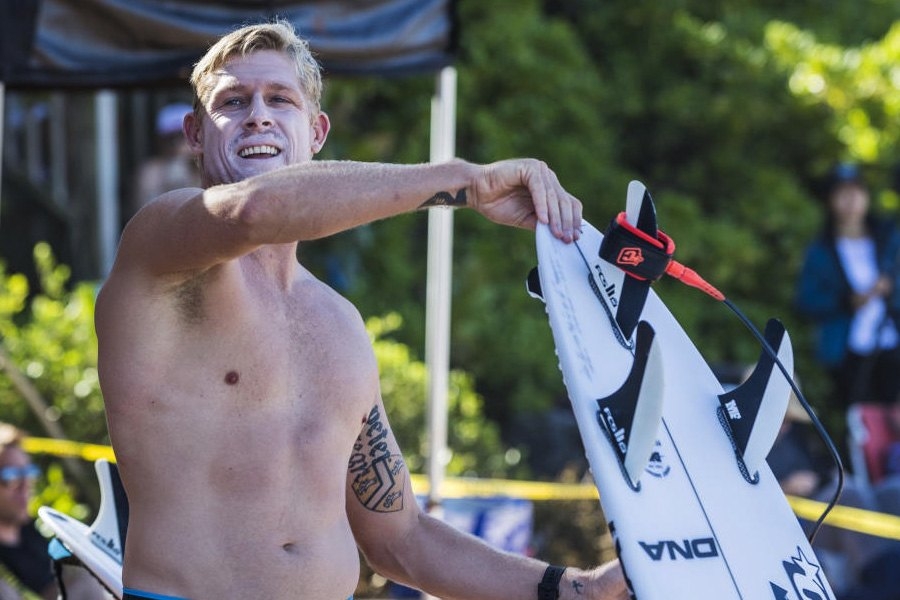 He will surf the first two events of the 2018 season, the Quiksilver Pro Gold Coast and the Rip Curl Pro Bells Beach, and will retire from competitive surfing on the CT after his final heat in the famous Bells Bowl.

"I feel like I've just lost the drive to compete day-in day-out now," says Mick. "It's been something I've been doing for 17 years, and even before that through QS and Juniors, and I feel that I just can't give it 100 per cent anymore. I'm just not enjoying it as much as I was in the past. I still love surfing, and I'm still super excited by it, but I feel that's there's other paths for me to take at this stage in my life.

"As for choosing to retire at Bells, I've always had in mind that my last event on Tour was going to be Bells. That's basically where I started my career, it was my first ever CT win, and I feel really connected down there." - Mick Fanning

Mick first joined the World Tour in 2002, after winning his first CT event as a wildcard entry at the 2001 Rip Curl Pro Bells Beach. It was a win that pushed him up into the elite levels of surfing, and a win that put his name on the map as a man who was going to make history.

In 2002, his first year on Tour, he won at Jeffrey's Bay - a wave that went on to become one of his pet events - as well as one of the most pivotal moments in his career, and life, when he was attacked by a shark during the Final heat of the event in 2015.

In 2004, after two years of being on the World Tour, Mick sustained a career-threatening injury while surfing in the Mentawais, tearing his hamstring off the bone and putting him out of the water for months. But rather than give up, Mick took this injury and used it as motivation to come back even stronger. He was back competing on the World Tour by 2005, and just three years later won his first World Title.

"After so many years on tour, it's been so fun," says Mick. "It's been a rollercoaster for sure, you have your peaks and valleys, but you know, when I look back on my time on tour it's amazing memories - from building myself up to compete, to heat wins and event wins, celebrating with friends and just seeing places I never thought I'd even get to."

Over the course of his career Mick has been through more than most of us could imagine. He's seen both personal triumph and personal tragedy under the scrutiny of the public eye, worked through injuries that would have ended others' careers, and punched a shark on live television, coming out completely physically unscathed.

Throughout all of that, he has won 3x World Championship Titles, 22x World Tour events, and completed 16 career tours - cementing himself as one of the greatest surfers and sportsmen in history

"It's been a wild and emotional ride on Mick's pro career for all of us at Rip Curl," says Neil Ridgway, Rip Curl Chief Brand and Marketing Officer.

"He's been our #1 surfer on Tour for so long that it will be a bit weird when we watch him step off at Bells. We have learned a lot about being partners in the surfing game from being together for so long and I thank him for all that he has done in his three World Titles.

"We have the world's best surf team here at Rip Curl, and the next generation are looking epic - the Tyler's and the Gabby's will continue to follow in Mick's footsteps - but over the past decade in particular, when the whips were cracking and the race to the final was on, there was always one man you could rely on to stand above the pack - and that was Mick. So many times at the end of the race I would say to myself ‘He never lets you down.'

"I have a mountain of respect for him personally, such are the moments that mattered in his career and quite often the very challenging circumstances behind the scenes that he achieved them in. I can dine out on Mick tales for the rest of my life because of that, so ‘Cheers, Mick!' And we will see you on The Search."

It’s time. I’ve decided the Rip Curl Pro Bells Beach will be my last event as a full-time competitor on the World Surf League Championship Tour. The tour has given me so much but I need a fresh challenge. I still love the game but can’t find the motivation and dedication required to compete for World Titles anymore. My time on tour has been incredibly rewarding and I have so many amazing memories, all of which wouldn’t be possible without some very special people... My Mum, Dad, Sister and Brothers. I love you. My sponsors that have stood by me and continue to back my goals. My shaper Darren Handley and his entire team for the care and hard work they put into every single one of my boards. My fellow competitors on tour, you are like brothers and sisters to me. My very tight support crew that have been there in good and tough times, thank you for always being honest with me. And thanks to the fans and everyone that has encouraged me and cheered me on for all these years. I’m looking forward to life away from the tour while keeping a close eye on things. I’m so proud of our sport and the way it continues to evolve. The performance level on the Championship Tour and the Big Wave Tour is remarkable. I can’t wait to watch it all go down as one of the sport’s biggest fans. I’m also looking forward to evolving my own surfing in new ways, visiting unfamiliar places and taking on different experiences. I will be competing at the opening event at home on the Gold Coast and then wrapping things up at the Rip Curl Pro. Bells Beach is where my Championship Tour career really kicked off, I’ve always loved the place and it seems a fitting stop to finish things up. It’s gonna be a big fun party and you’re all invited to come. Hope I see you there. Cheers and thanks for the memories. Mick @ripcurl_aus @redbullau @reef @dhdsurf @dragonalliance @creaturesofleisure @vertra @fcs_surf @skullcandy @mercedesbenzvans_au @opkix @grapes @mfsoftboards @balterbrewers