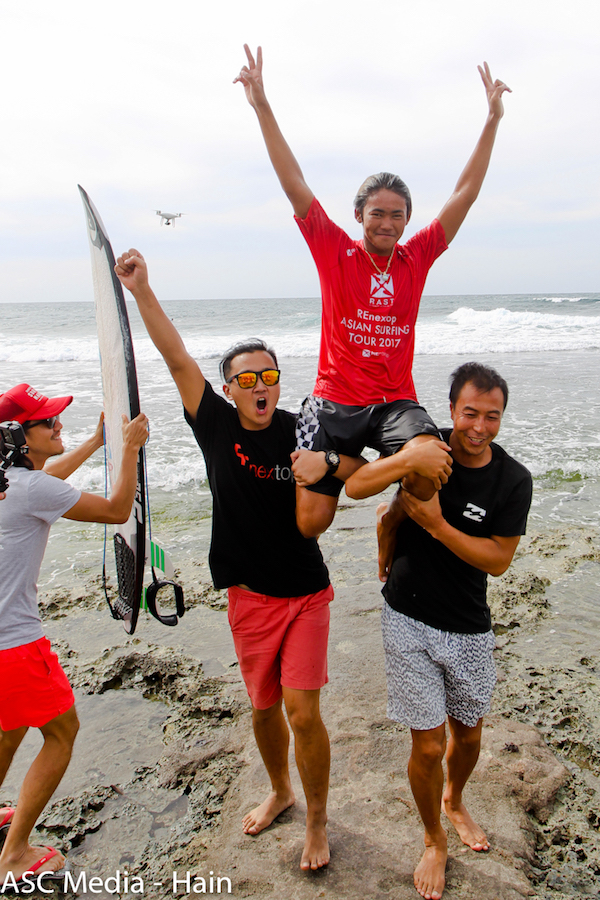 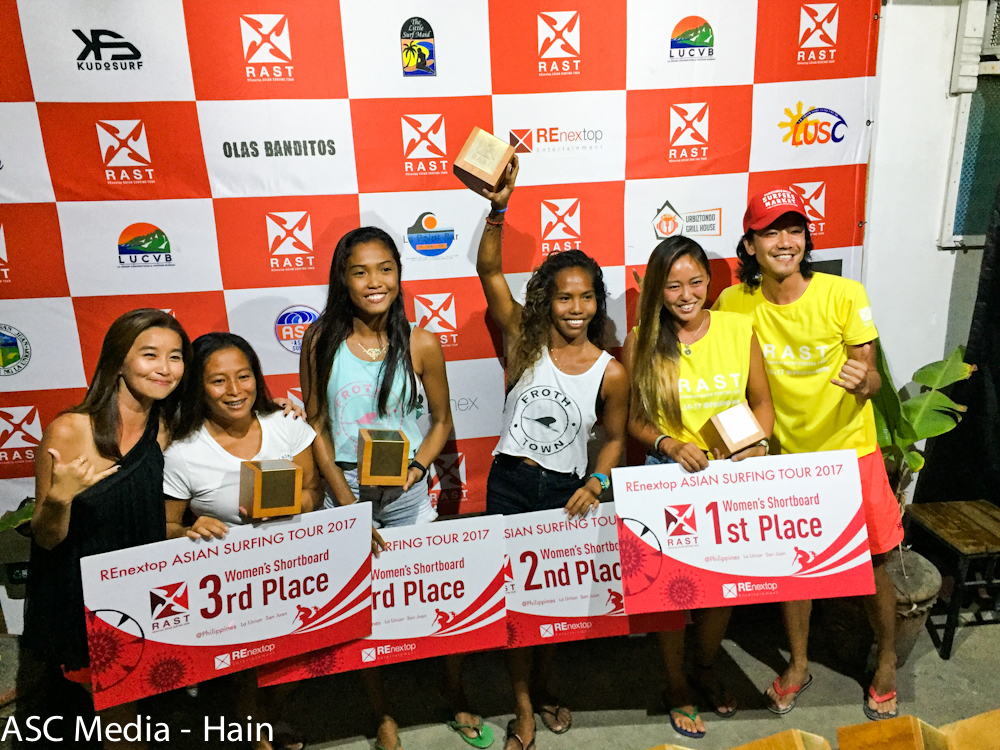 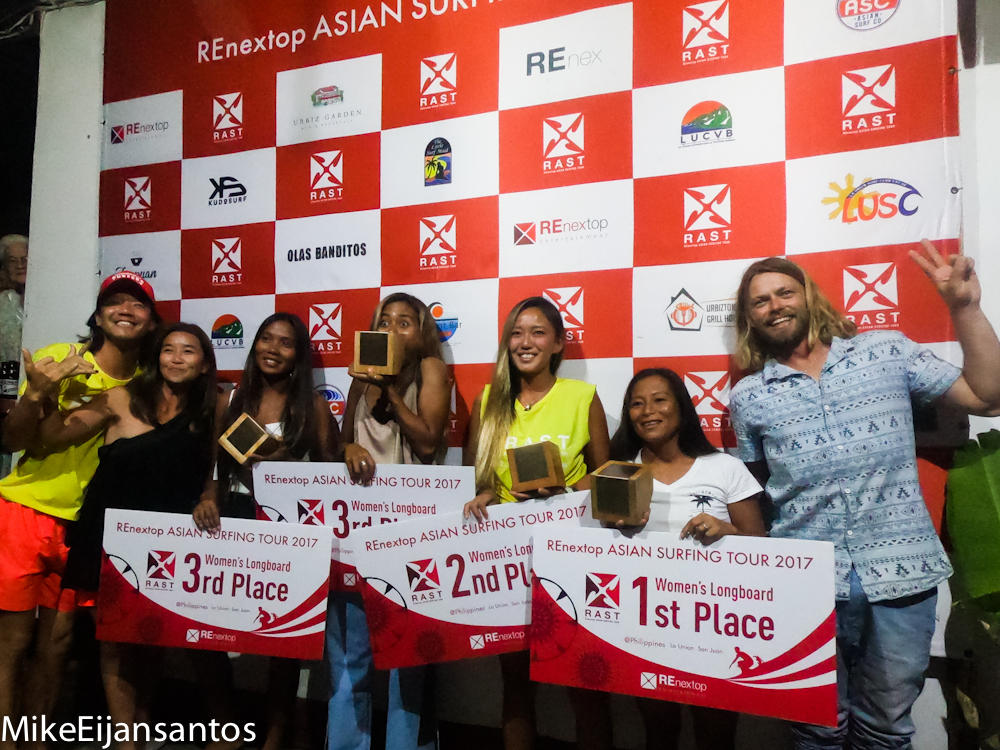 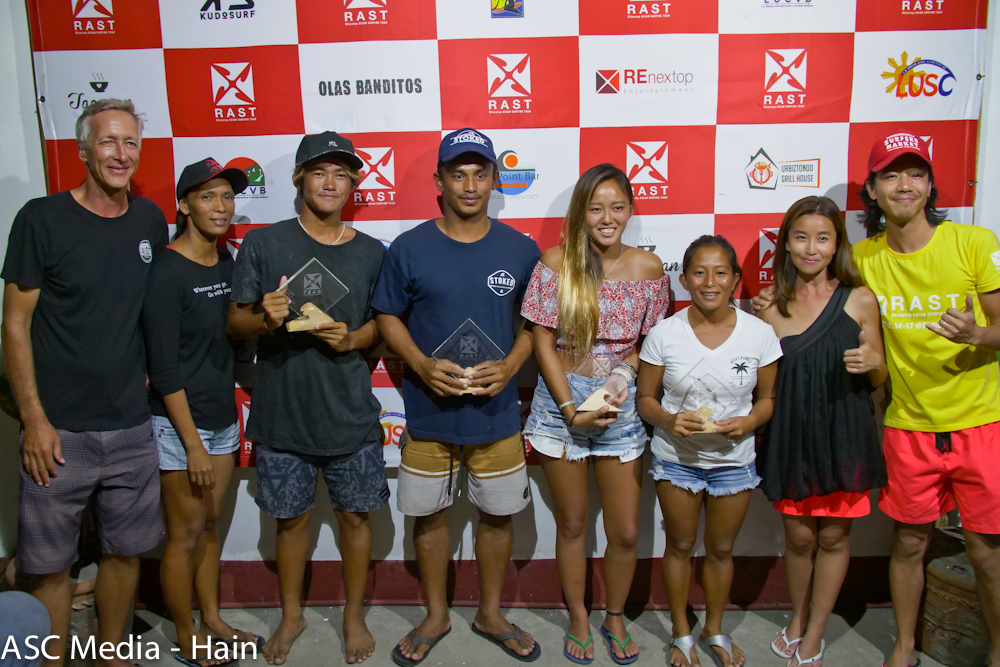 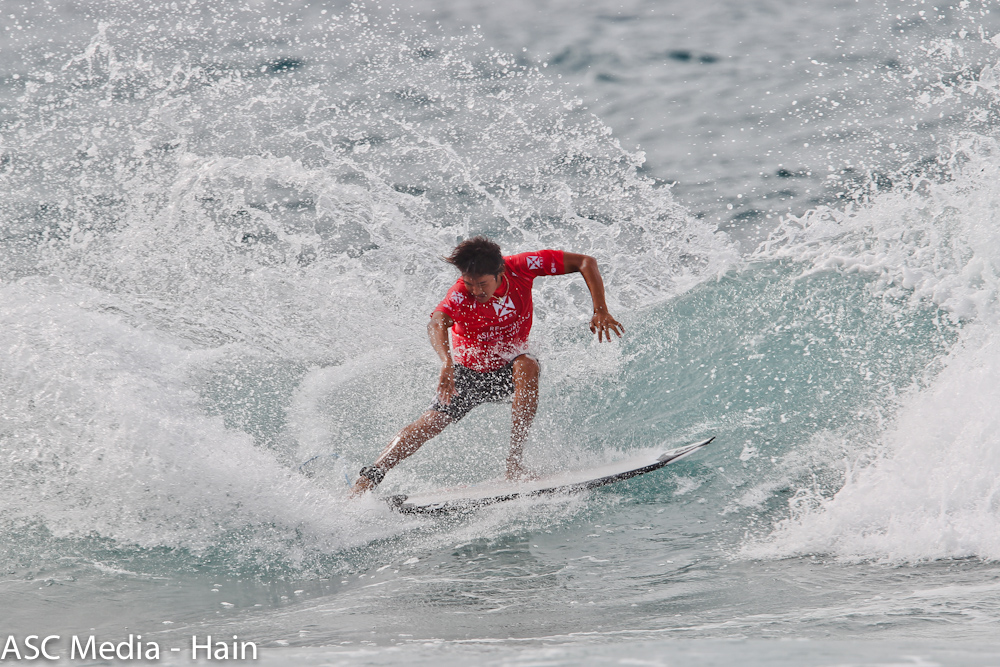 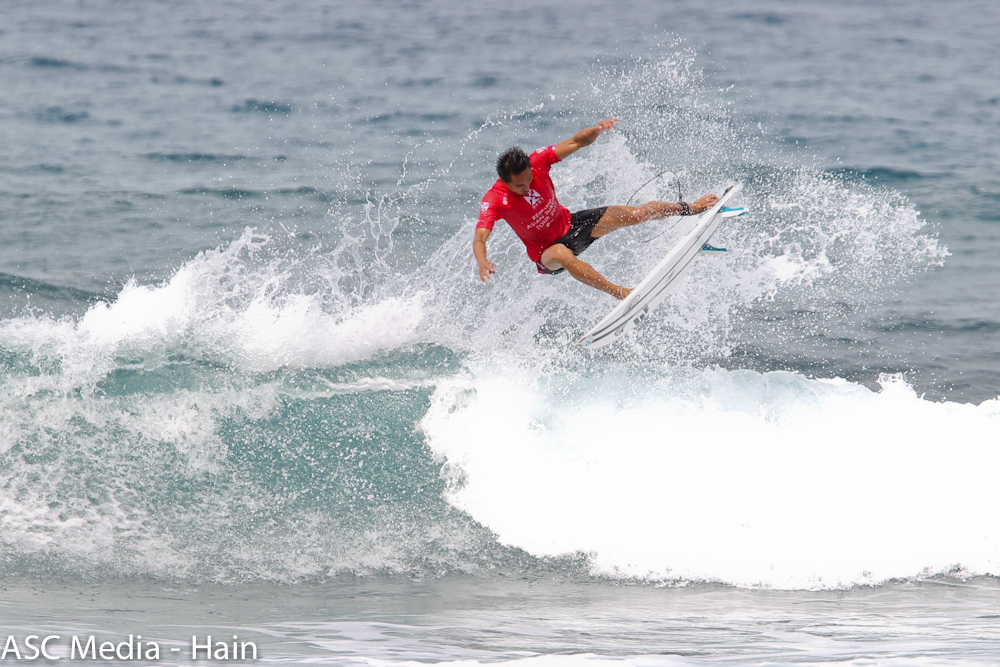 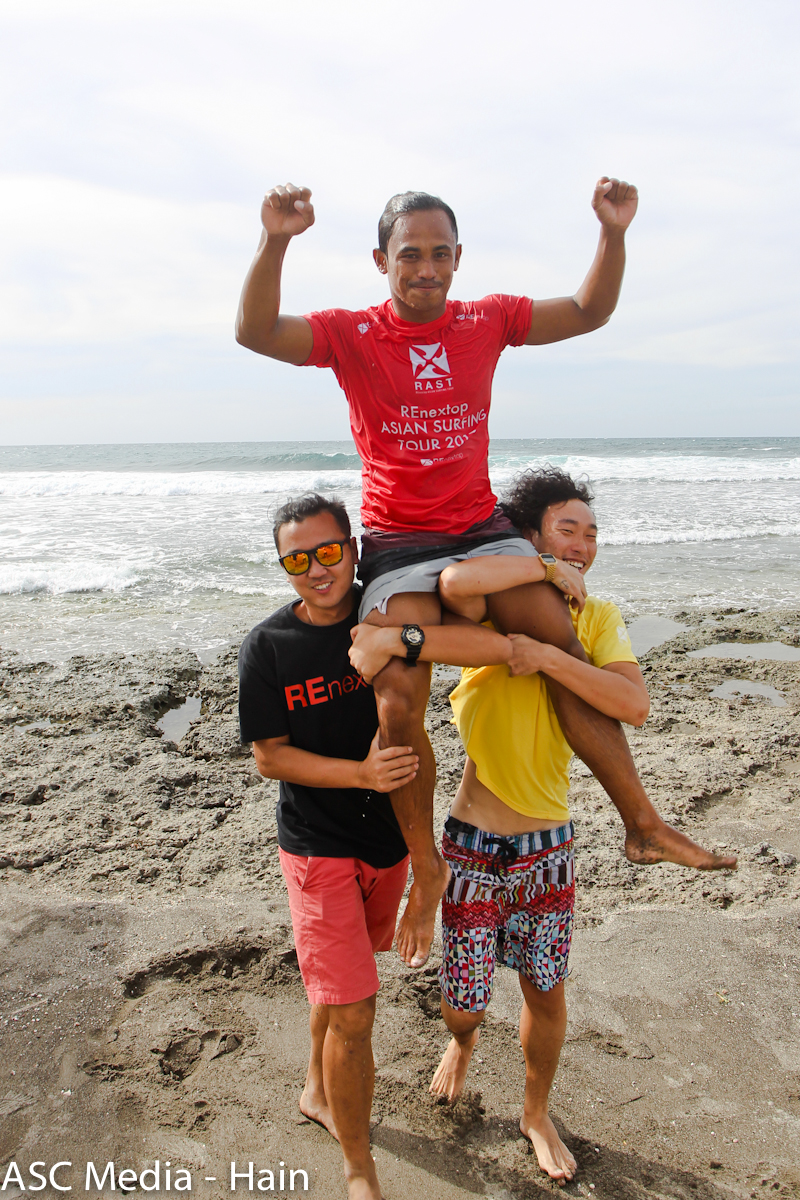 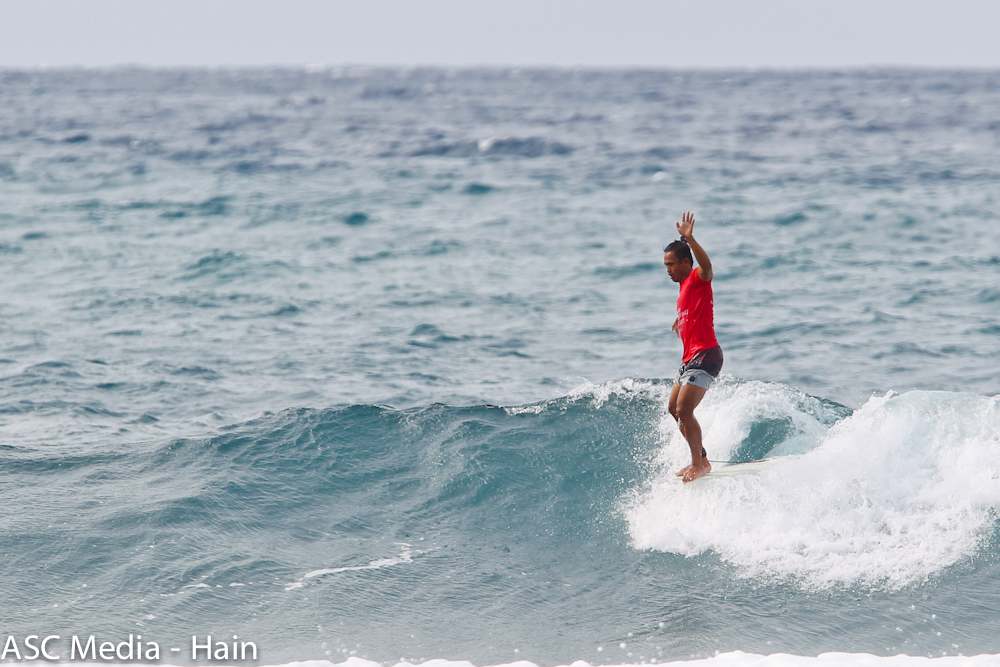 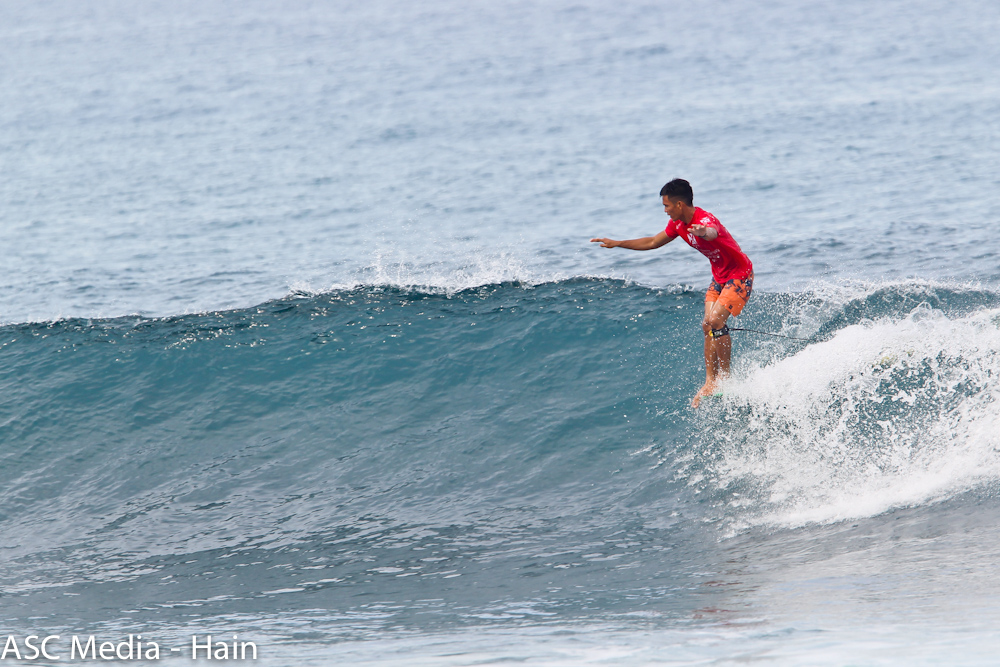 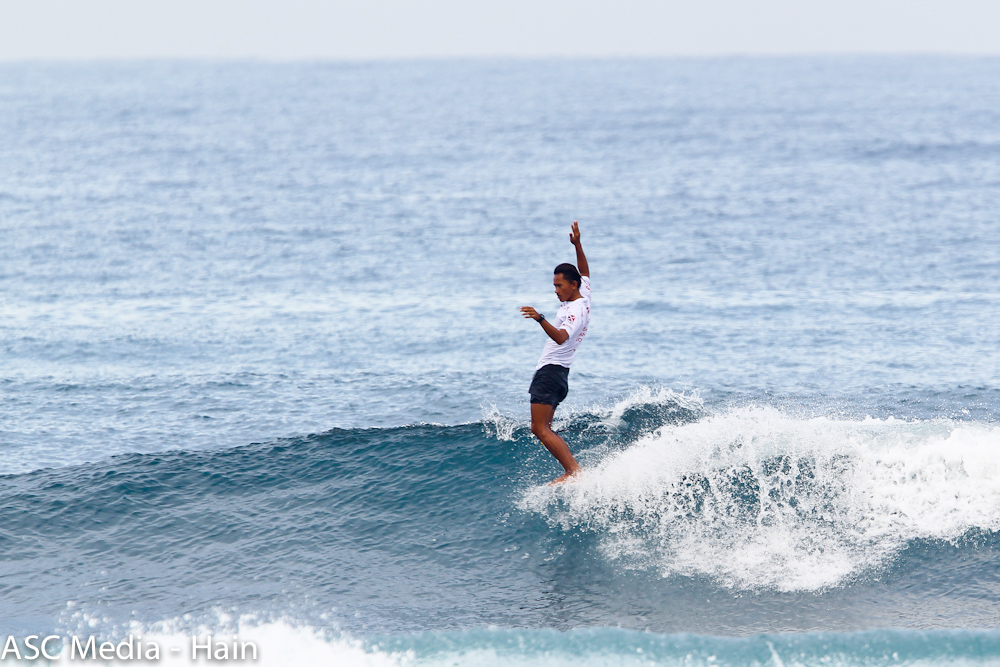 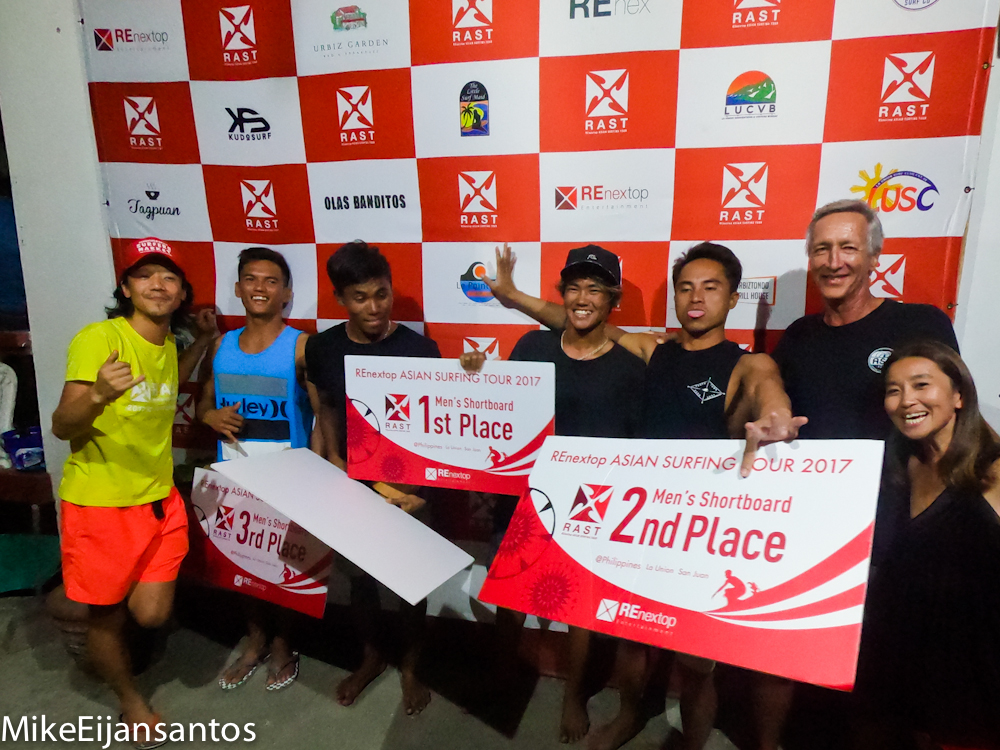 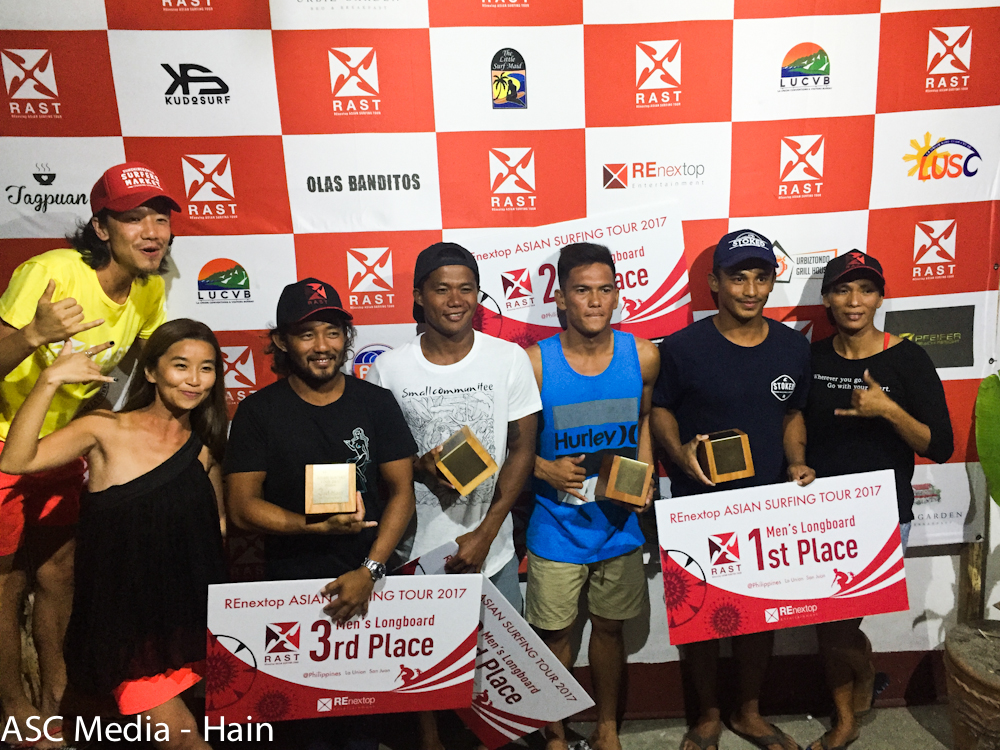 In an exciting finale to the inaugural REnextop Asian Surfing Tour 2017 at La Union in the Philippines yesterday, Men’s divisional champions and RAST #3 event winners were decided...

...yesterday afternoon, and everybody celebrated the historic occasion at the Le Point bar until the late hours of the night.

With the Women’s Longboard and Shortboard champions having been decided on Friday afternoon, on Saturday it was the all about the men.

Early morning glassy conditions saw the Men’s Shortboard Division race into action, starting with Indonesia’s Rio Waida handily winning his Round 2 heat, leaving both his opponents needed a combination of scores to catch and pass him.  His smooth and powerful style along with his variety of maneuvers had him winning every heat and including the final.  Waida is WSL Asia’s number 1 ranked surfer, and with this win added to his RAST#1 win in Bali, earned the REnextop Asian Surfing Tour Men’s Shortboard Championship title.

“I’m really happy to be able to compete in this final REnextop event, and to come away with the win.  It is my last event of the year, so to end as the event winner and the rankings champion is so good,” said Waida.

When asked to describe his final against Philmar Alipayo, who is the Philippine’s number 1 ranked surfer, he replied, “It was really hard out there, especially being up against Philmar, so I was a bit nervous at the start.  Then I got a couple of long waves and started to feel more comfortable.  But my legs started to get tired near the end, plus it was a long paddle back to the lineup, so it was a real workout.  But I knew Philmar would try to look for some lefts and do some airs like he did in the quarters and semis, so I knew I couldn’t rest and I just had to get some really good waves and do my best to score big.  Lucky I got the waves I needed and won.”

In the Men’s Longboard Division it was a hotly contested battle for the final and the RAST Longboard Championship, as Dean Permana from Indonesia was the sole contestant in attendance with an event win, so it was his championship to lose, as he just needed to finish ahead of La Union local Benito Nerida in order to bring home the title.  But as luck would have it he was matched up with Nerida in Quarterfinal 2, and while Nerida picked off the biggest set waves and posted near excellent scores, Permana failed to find his form and failed to advance to the seminfinals.

The pressure was intense on Nerida, as with the event win he would just be tied with Permana for the championship title, which would require an extra heat between the two in order to decide the championship called a surf-off.  Surf-off’s are extremely rare, but coincidentally at the recent WSL World Longboard Championship event in Taiwan just two weeks ago there was the second ever surf-off in the history of the WSL between Taylor Jensen and Edouard Delpero!

Nerida proved to be unshakeable and unstoppable, using his strength and wave knowledge to find the best waves and perform combinations of hand 5’s and hang 10’s along with deep rail caves to best first Roger Casugay in the semifinals and then Jay-R Esquival in the final before taking on Permana again in the 25 minute surf-off, and once against getting the better of the boy from Java, coming back to the beach with both the event win and the RAST Men’s Longboard Championship.

“It’s hard to even explain how I feel right now, after just winning this event and championship, as it’s a really big thing for me!’ said Nerida In his post surf off interview “But I want to thank Renextop for making this series of events, the judges, and the media for sure.

When asked to describe his surf-off experience, he explained, “I was pretty nervous at the start when catching my first wave, as I know Dean is such a good surfer and competitor so it was a bit of slow start for me, but then I got a couple better waves and got the lead, so it gave me more confidence as the heat progressed.  It was all about wave selection, as you have to know how to read the waves, so I knew I had the advantage being a local here especially with the windy and bumpy conditions.  It feels so good to be the champion, like I’m flying!”

On the second day of the RAST #3 event, Japan’s Kairi Sekaguchi claimed the Women’s Shortboard victory and clinched her REnextop Asian Surfing Tour 2017 Women’s Shortboard Championship, and the Philippines Daisy Valdez won the Women’s Longboard Division and the RAST Women’s Longboard Championship on the second day of competition.

The core judging panel for the event was made up of Luke Landrigan, Mike Oida, and Manuel “Wilmar” Melindo, all ISA certified Level 3 judges from the Philippines, with Head Judge Keenan Roxburgh from Australia overseeing the panel.  Roxburgh is a WSL Head Judge and fresh off the WSL World Longboard Championships in Taiwan, and this was his first time in the Philippines.

“I was really surprised and impressed with the quality of the wave here as well as the talent level of especially the longboarders,” said Roxburgh.  “I knew there were some great shortboard surfers in the Philippines but I had no idea of the depth of the talent pool of the longboarders, which was of particular interest to me, understanding and working in longboarding as much as I have.  This has really put the Philippines on the map for me, and I thank REnextop for doing such a great job and giving me the opportunity to see and judge these events.  As the event, we had challenging conditions in Bali at the first event as it the waves were big and the weather was a bit wild with rain and wind, then at Japan it was challenging because the waves were quite small, so to come here and get such great waves to finish off the year was such a pleasure…for the judges, the organizers and the surfers. Overall, these events have been a big success and I want to offer my congratulations to everyone involved!”

REnextop CEO Lillian Chen was all smiles at the awarding party, where everybody gathered to celebrate the champions and the end of the RAST series of events.

“The level of surfing here in the Philippines is much higher than I imagined, as they won both the men’s and women’s longboard divisions, and were runner ups in the shortboard divisions as well!  They are so competitive but so nice, so it was great to have the final event here,” said Chen.

“And our media exposure was phenomenal, both in China and here in the Philippines.  Today we had 15 million Chinese people watching our live video, showing that Chinese people are also so interested in what we are doing, and also ABS-CBN here in the Philippines has been broadcasting it on their news channel each day. Next year we plan to do more stops, get more Asian surfers together, and make the party more interesting for everyone, and give Asian surfers more chances to show their talent to the rest of the world,” added Chen.