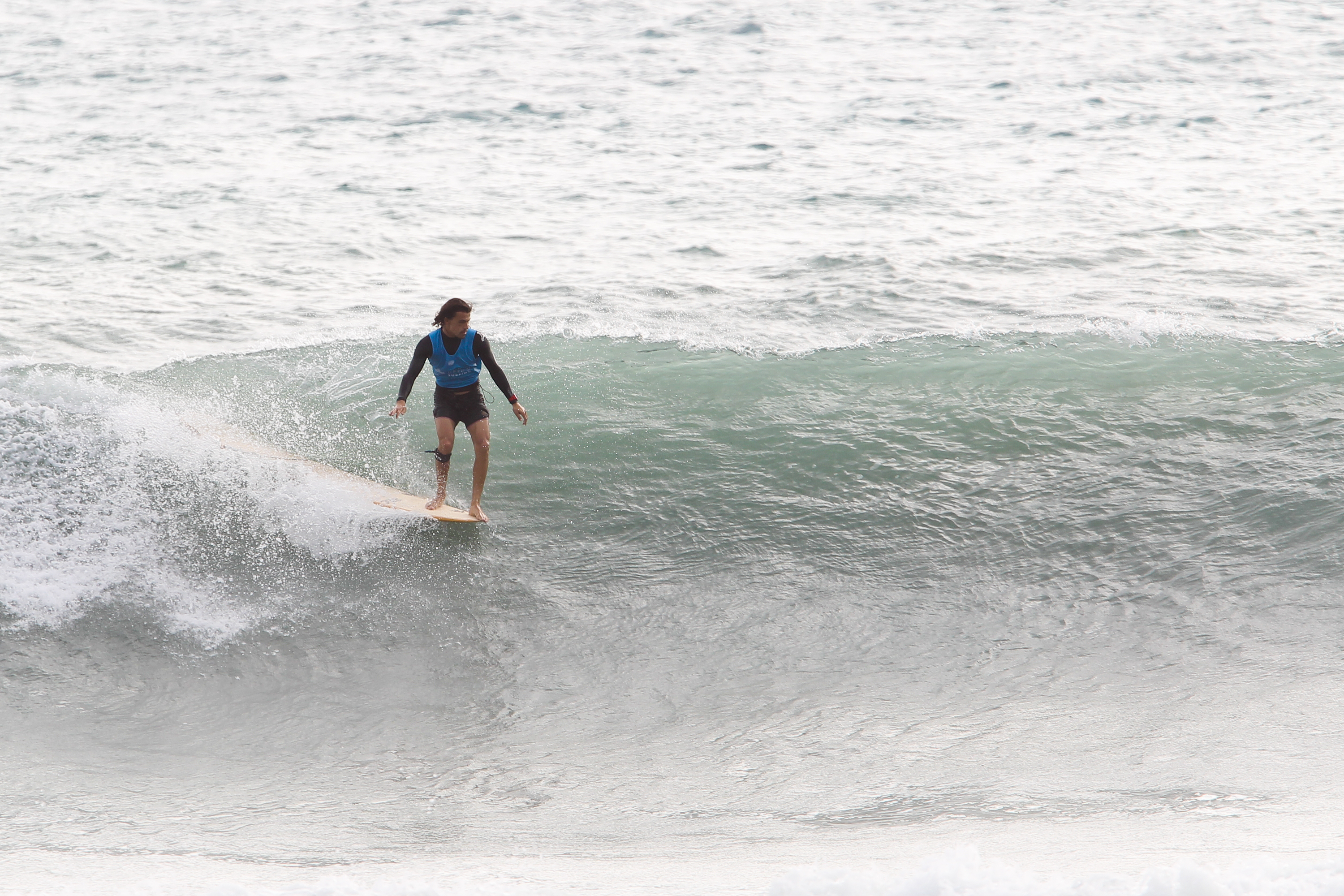 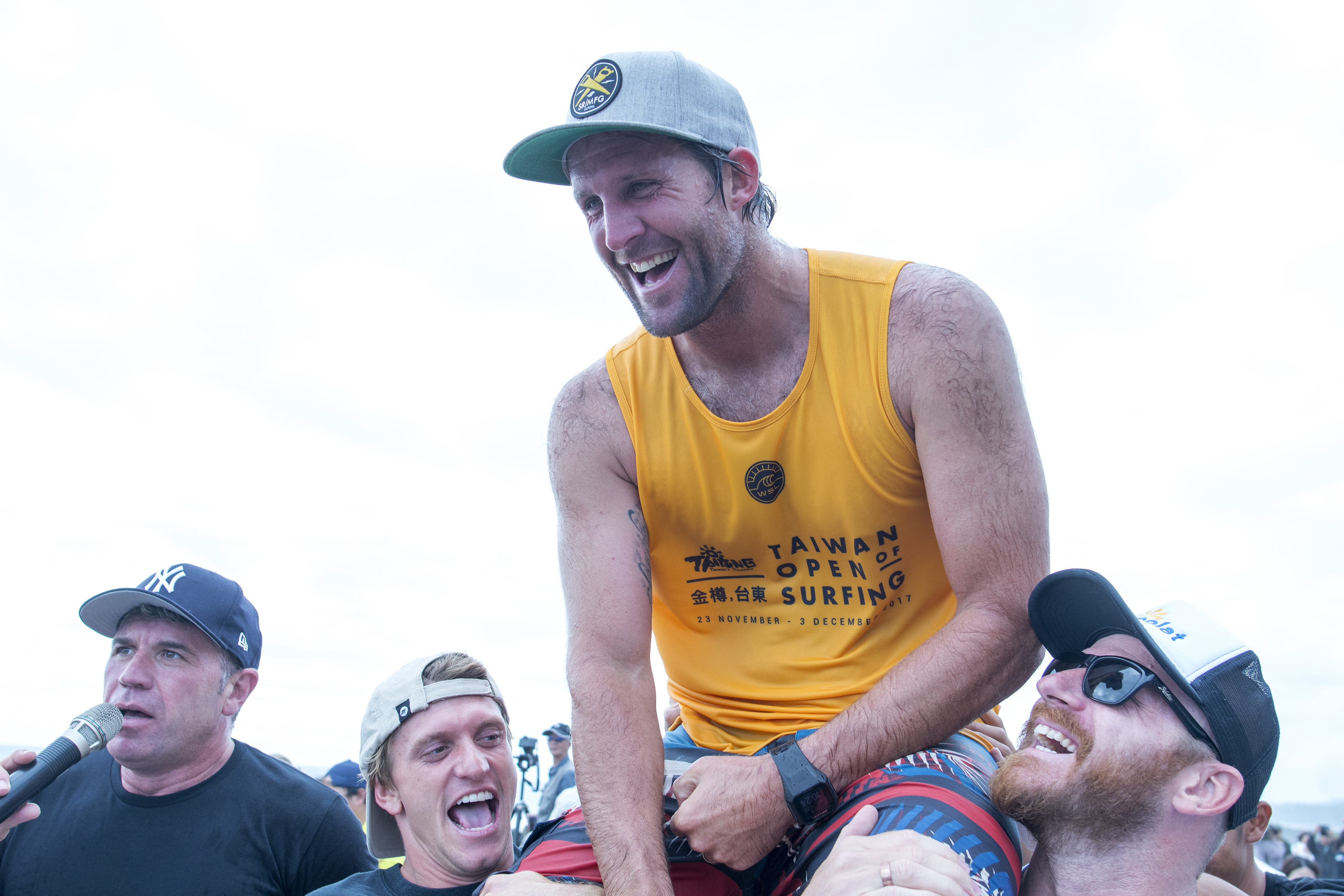 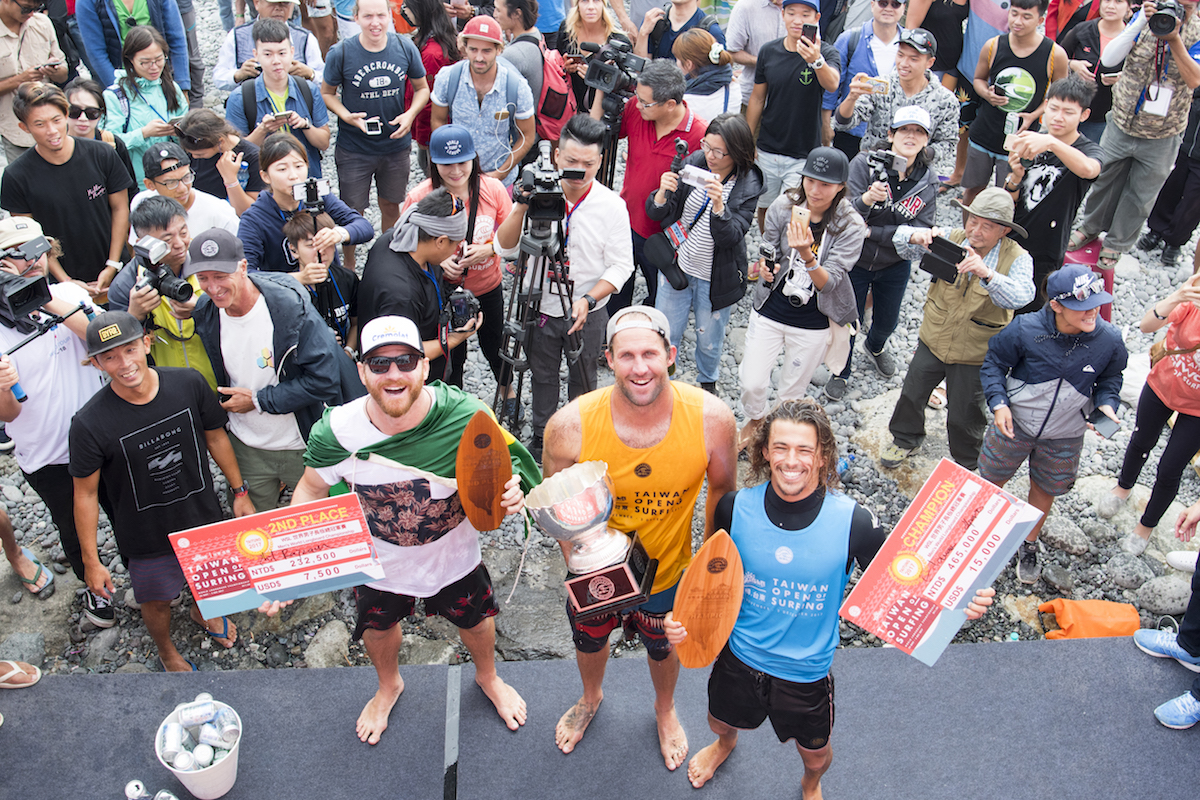 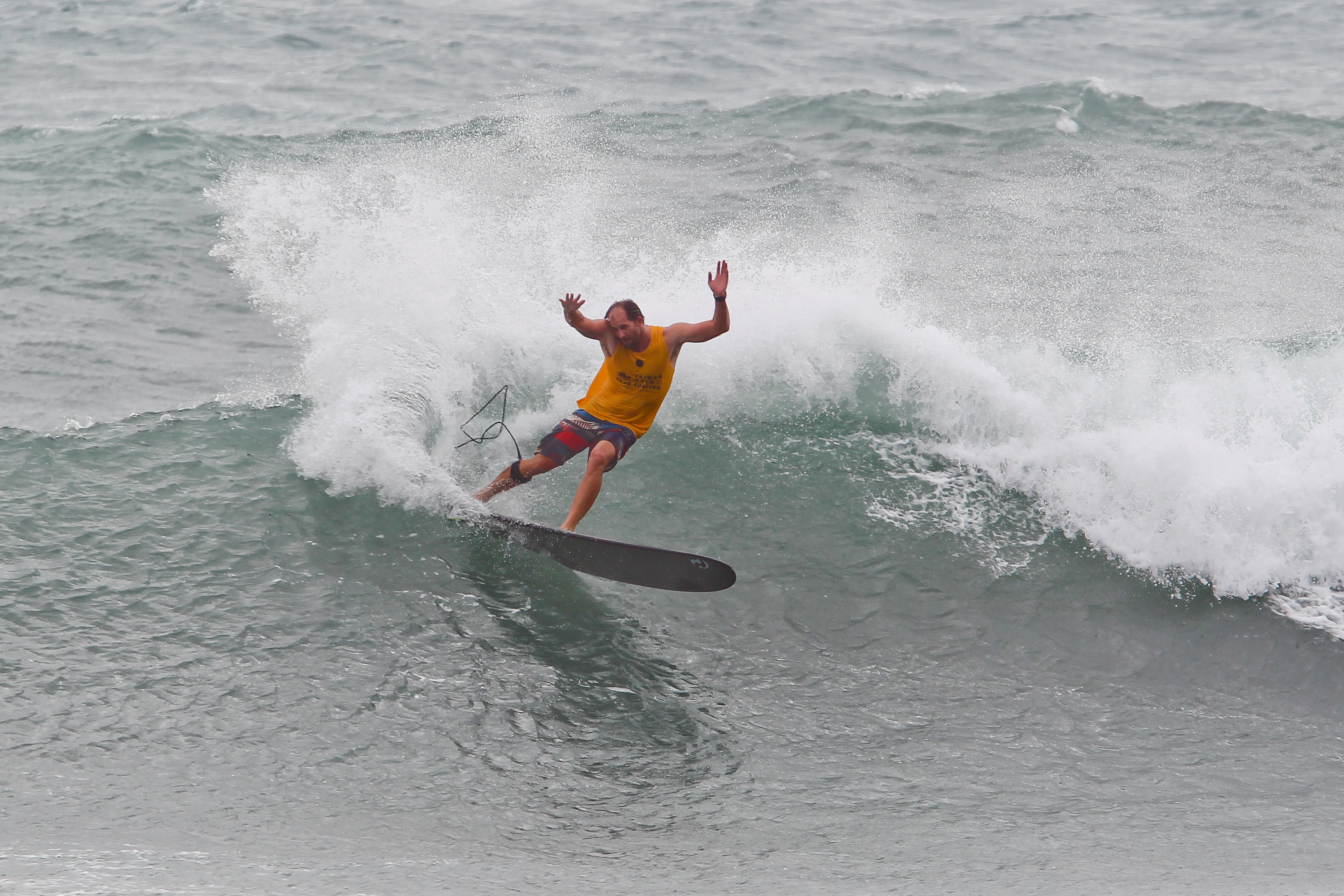 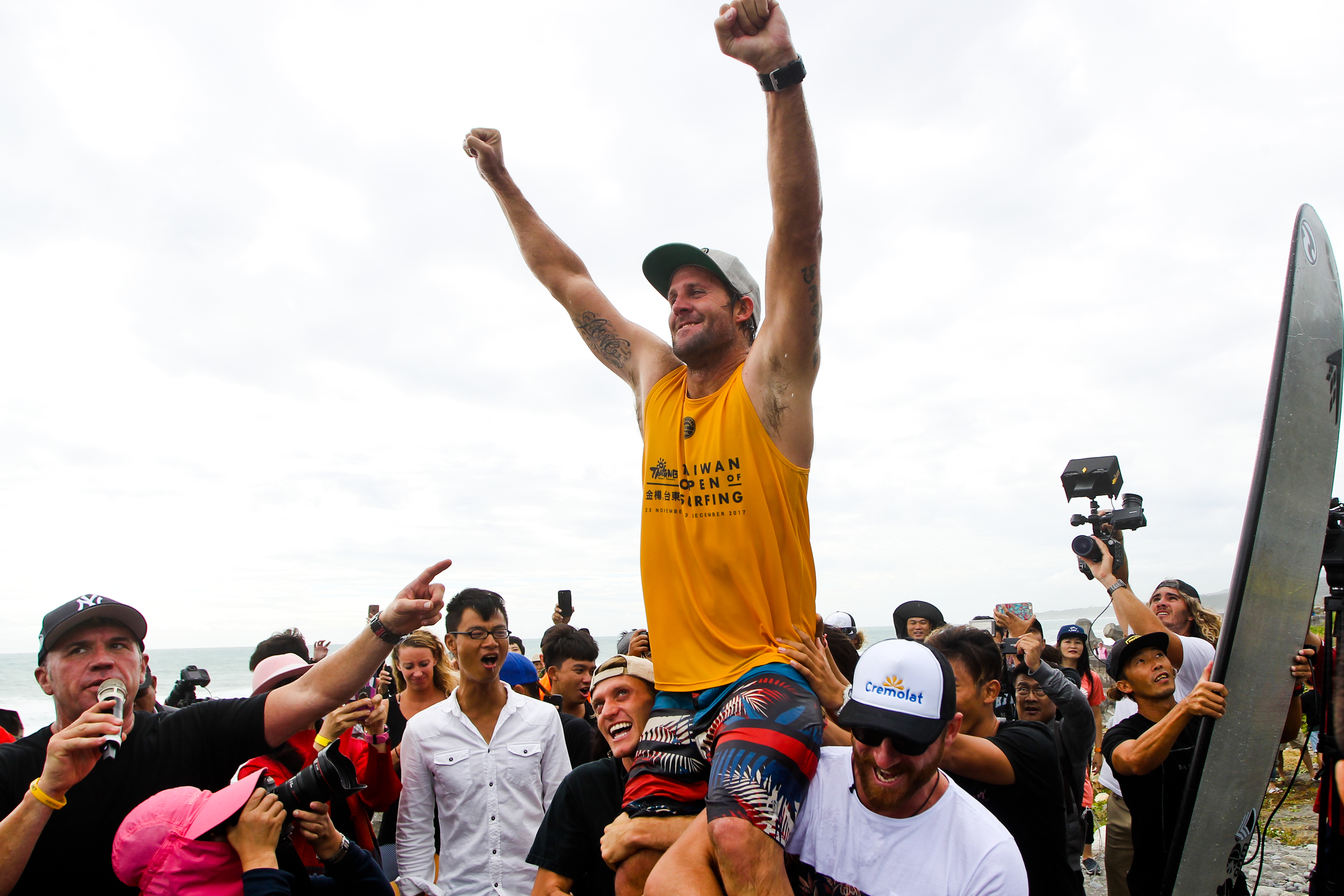 Taylor Jensen (USA) has made history at the Taiwan Open World Longboard Championship (WLC) by winning his third World Title in a winner-takes-all surf-off against Edouard Delpero (FRA).

It is only the second time in WSL / ASP History that a World Championship has been decided by a surf-off – as the two surfers finished the season in equal 1st place on rankings. It was a thriller heat with the two trading clean 4-to-6 foot waves at Jinzun Harbour.

After being eliminated in the Quarterfinals of the Taiwan Open WLC event earlier in the week, Jensen had a long wait to find out his fate.  When Edouard Delpero beat Phil Rajzman (BRA) in the final of the Taiwan Open, he joined Jensen on top of the Rankings, meaning that the event needed to run one more heat to decide the 2017 World Longboard Champion. Delpero had just won his first WLC event and was on a roll, but after a number of close second-place finishes over the last two years, nothing was going to stop Jensen from claiming his third Championship.

“This doesn’t feel real at the moment I’m totally tripping out on this,” Jensen said. “It has been an absolute rollercoaster of a week with losing in the quarterfinals then watching everyone fall out, then realizing I still have a chance was mind-blowing. For it to go down to a surf-off is really cool. I was a mess all week, not sleeping and just constantly nervous than when I found out I would surf for it I just treated it as a normal final.”


Jensen has won World Championships in 2011 and 2012 in Italy and in China but rates this close call in pumping Taiwan waves as his sweetest yet. Taking out the Kumul PNG World WLC event earlier this season, Jensen was in the box seat heading to Taiwan.

“I was the first to win in Italy and the first to win in China so it is really cool to be the first to win in Taiwan,” Jensen continued. “This is definitely the sweetest of all of them. I have had a few close calls recently and it has definitely taken a toll emotionally. I came to this event with a lot of fire in me and I have worked super hard. Winning in PNG definitely got me pumped up at the start of the year and I’ve just had to carry and manage that motivation throughout the year. This win has definitely alleviated the frustration of the last few years and to get it in great waves in a beautiful place like this is really special for me.”


Although Delpero came short in the surf-off he won the Final of the inaugural Taiwan Open World Longboard Championship. The stylish Frenchman won at Jinzun Harbour in 2016 and was always going to be hard to beat. Delpero leaves Taiwan with his first WLC event win and finishing the year in second spot on the WSL Longboard Rankings.

“This has been a great event for me,” Delpero said. “I have worked really hard this week to get to the final. I was always aiming to win but never expected to be in a surf-off for the World Title. I love Taiwan and the Taitung area – I have amazing memories here and always get incredible surf. I’m already looking forward to coming back next year.”


In the final of the Taiwan Open, Delpero came up against 2007 and 2016 World Champion Phil Rajzman (BRA) from Brazil. Rajzman was Jenson’s only hope to clinch the title without a surf-off and looked a solid chance to win the event. In the final, Rajzman struggled to find the rhythm he had in earlier rounds and went down to Delpero with a heat total of 11.03 and finishes the season rated 4th in the world.

“Edouard was surfing incredibly all event and really deserves the win,” Rajzman said. “I struggled to find good waves in the final which was hard because I would have loved to have won the event. Winning and giving the title to Taylor would have been special for me but to have a surf off is really exciting for the sport and both Taylor and Edouard deserve to win the title.”