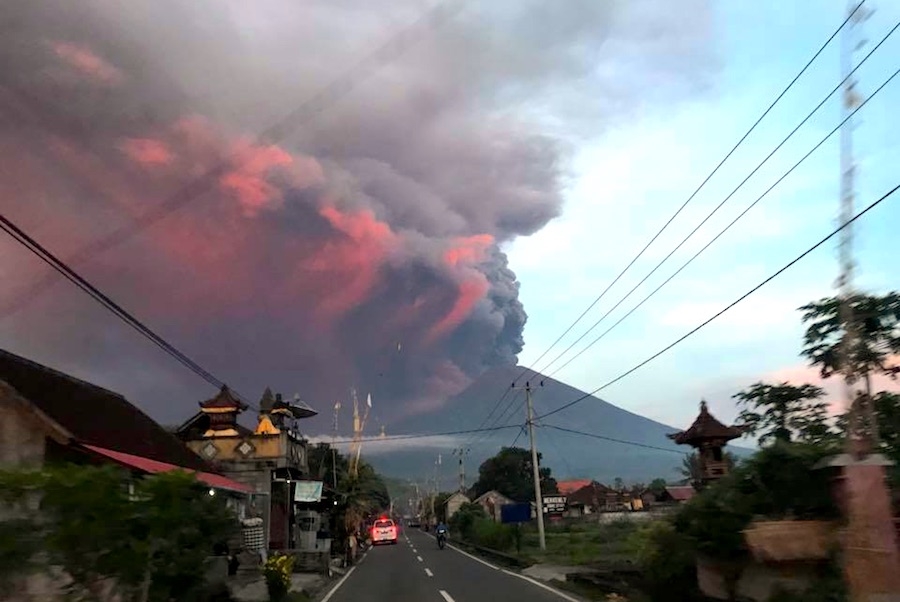 Jetstar has resumed flights to Bali, after the second eruption of the Mt Agung volcano within a week forced it to cancel flights to the island last night.

The airline says its senior pilots have assessed the volcanic ash conditions at the popular tourist destination, finding them improved and safe to fly in. It will run 18 flights between Bali and Australia or Singapore on Sunday, while three flights from Townsville, Singapore and Perth remain cancelled. It came after the rumbling volcano spewed smoke hundreds of metres into the air, the second time since Tuesday, grounding international flights and forcing residents to flee.

Earlier, at least four Jetstar flights and one Qantas flight between Australian airports and Bali were diverted to other airports. A Virgin Australia flight from Pt Hedland to Bali has also turned back.
Mount Agung belched smoke as high as 1,500 metres above its summit, twice as high as on Tuesday when smoke sparked an exodus from homes near the mountain.
People living within 7.5 kilometres of the mountain have been told to evacuate, senior volcanologist Gede Suantika said, advising residents to remain calm. It comes after the volcano stirred to life in September, forcing 140,000 people to leave the area.


The Darwin Volcanic Ash Advisory Centre said that the volcanic ash cloud was up to 25,000ft and moving south. However, Batik Air, Garuda, and Indonesia AirAsia are still operating. Jetstar’s flight JQ 116 did not depart from Perth to Bali at 5.30pm and the airline’s three flights today are all expected to be cancelled.
Volcanic ash can significantly damage to aircraft’s systems, sensors and engines and Australian Airlines take an ultra-cautious approach to volcanic as People intending to travel should check the airline’s website.

The latest eruption is stronger than last Tuesday’s, with a cloud of steam and pulverised rock driven at least 1,500 metres above the volcano’s 3,000-metre peak. The National Disaster Mitigation Agency spokesman Sutopo Purwo Nugroho said the volcano’s alert status remains at the second-highest level. There hasn’t been an increase in seismic activity, he said.


About 25,000 people have been unable to return to their homes since September, when Agung showed signs of activity for the first time in more than half a century.
Mount Agung’s last major eruption in 1963 when about 1100 people were killed.

There are 129 active volcanoes in Indonesia, which sits on the Pacific Ring of Fire, a belt of seismic activity running around the basin of the Pacific Ocean.

Live Cam towards the Volcano: