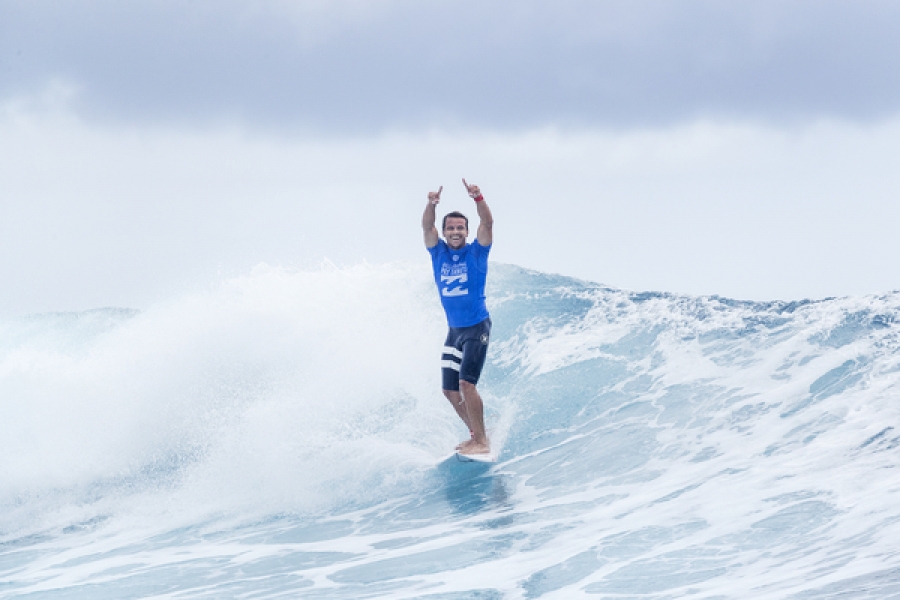 ....after defeating Gabriel Medina (BRA) in the Final. A full day of competition witnessed intense action from the remaining competitors as they battled through 15 heats in six-to-seven foot (1.8 - 2 metre) surf at Teahupo’o.

Today’s win marks Wilson’s third CT victory and best result at the Billabong Pro Tahiti. The Australian is always a serious WSL Title contender and his first place finish moves him up from 8th to 5th place on the Jeep Leaderboard heading into the Hurley Pro at Trestles.

“It has been a few years,” said Wilson. “It is so special to win. I am ecstatic and I have nothing left in me. I am just so happy and relieved to finally win an event again. It took so many good waves to win this event and I was lucky enough to get those. I felt like I was trending in the right direction. I’ve had a pretty steady start to the year and I am so happy to be in the mix now. With so many events left, I am really looking forward to it. I was already enjoying myself on tour and even more so now. I cannot wait for the rest of the year.”

Wilson had a slow start to this season on the Australian leg but has been building momentum throughout the 2017 season, with improved results at each event, specifically his 3rd place finish in J-Bay, 5th in Fiji and 9th in Rio. The contender’s win now puts him just 2,150 points behind World No. 4 Owen Wright (AUS).

The exciting Final saw an all-out battle between Medina and Wilson. The Brazilian got the lead over the Australian with an incredible 17.87 combined score (out of a possible 20), with a near-perfect 9.20 (out of a possible 10) and excellent 8.67. Wilson was stuck in a combination situation and needed two new scores with time running out. Wilson fought back with a critical 8.10 and outstanding 9.23, but still trailed by 1.09 points. Under pressure but with priority, Wilson found his way out of a deep tube to earn a near-perfect 9.73 for the win in the dying minutes of the Final. 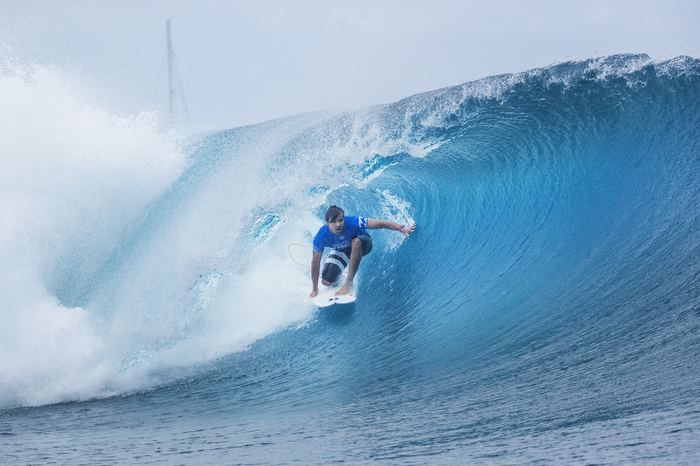 Caption: Julian Wilson (AUS) escaped out of tricky barrels to earn the highest two-wave total of the event, a near-perfect 18.96.
Credit: © WSL / Cestari

“It was an awesome Final,” continued Wilson. “With that 9, it was such a good wave and I was a little bit far in, but it was so nice that I wanted to make something special happen. I had plenty of time to get that 8.6. It really turned on for us in the Final and we had some great opportunities, so I am just glad to get that special one. Thank you to Gabby (Gabriel Medina) for an awesome Final.  We seem to have these amazing match-ups in the Final and we didn’t disappoint. It has been such a special few days and I think we finished in the best conditions. We had a good battle and I am just so happy.”

The runner-up finish for Medina is his best result this season. The 2014 WSL Champion and event winner has struggled to excel past the Semifinals in 2017, but the Final appearance today proves that Medina is back in the game heading into the second-half of the season. The Brazilian superstar will improve two places to 7th on the Jeep Leaderboard.

“I am stoked to make another Final against Julian (Wilson),” said Medina. “He has been surfing really well the whole event and I think it is a little harder on your backhand, so good job to him. I am stoked. It feels good to be back in the game and now I am thinking about Trestles. I am happy. It is Father’s Day in Brazil and my dad is here, so that was a good present.” 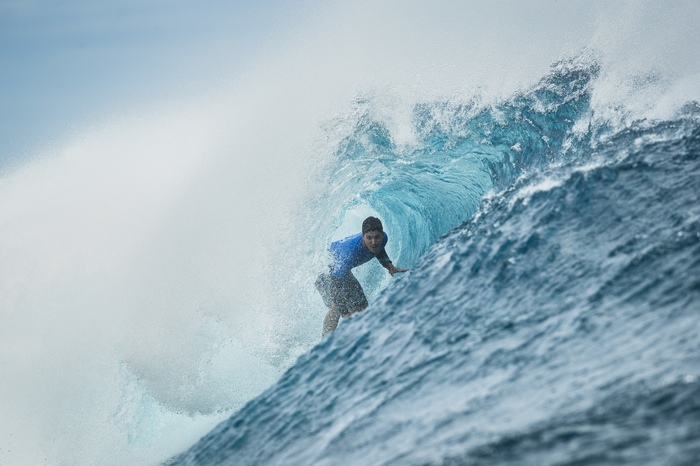 Caption: Gabriel Medina (BRA) earned a runner-up finish after great performances at the Billabong Pro Tahiti. The Brazilian posted a Perfect 10 in the Quarterfinals, the highest single-wave score of the event.
Credit: © WSL / Poullenot

Wilson previously ended Jordy Smith’s (ZAF) run in Tahiti in the second Semifinal. Today the South African earned his best result in Tahiti, a 3rd place finish, and the top spot on the Jeep Leaderboard. Current World No. 1 Smith will head into the Hurley Pro at Trestles not only ready to defend his event win but eager to keep his lead over the world’s best surfers to improve his World Title campaign.

“I am still learning a lot and I wish I had figured it out earlier in the event,” Smith said. “I am just going to continue to keep learning and watching John (Florence), Jeremy (Flores), Kelly (Slater) and those guys and keep learning. I am stoked to be in the top spot. Obviously, it is a long way to go, but it is sick to be in the front there. This year is a new year and I just want to bring something new, something fresh, and keep trying my hardest.”

The first Semifinal heat saw Medina eliminate Kolohe Andino (USA) with two commanding 7-point rides. Andino posted the highest single-wave score of the heat, an 8.90, but could not secure the backup score required to advance to the Final. Andino’s excellent 3rd place finish marks his career-best result in Tahiti after a disappointing 25th place at the 2017 Corona Open J-Bay. Andino will look to bring the momentum from his Semifinal finish into his hometown of San Clemente, which will host the next stop on the 2017 CT.

2017 World Title contenders John John Florence (HAW), Owen Wright (AUS) and Matt Wilkinson (AUS) were eliminated from the event prior to the heated Semifinal match-ups but will keep within striking distance of the Jeep Leader Jersey as they remain in the Top 4 on the rankings.

Smith dispatched Florence in the third Quarterfinal match-up. The 2016 WSL Champion could not find the scores to close the 1.40-point gap and reclaim the yellow Jeep Leader Jersey for the next event. Florence leaves with a back-to-back Quarterfinal result to stay in 2nd on the Leaderboard, only 950 points behind Smith.

Florence showcased incredible surfing in Tahiti and posted the event’s second highest two-wave total, a near-perfect 18.70 in Round 3. In addition to his 5th place result, Florence received the Andy Irons Most Committed Performance Award for the second time in his career (2017, 2013). This prestigious award is given out every year to the standout surfer of the Billabong Pro Tahiti. Previous winners include Kelly Slater (2016), C.J. Hobgood (2015), Owen Wright (2014), Ricardo dos Santos (2012) and Jeremy Flores (2011).

“This is super amazing,” Florence said. “It is such an honor to get this award. Andy Irons was a part of that era that I looked up to growing up. He was the guy that we watched the footage of air-dropping at 12-foot Chopes and just standing in big barrels and getting spit out. Andy being the last Hawaiian World Champ -- and that was when I was younger -- so to win the World Title last year and bring it back to Hawaii and have everyone in Hawaii supporting me was such an amazing thing. It is so cool to win this because Andy is one of my all-time heroes.”

En route to his second place result, Medina knocked out Wright in the Quarterfinals with a Perfect 10 on his opening exchange. Wright was not able to escape the combination and was eliminated in Equal 5th place. Wright will stay in 4th on the Jeep Leaderboard.

Wilkinson was eliminated in Round 5 Heat 2 by Brazilian threat Wiggolly Dantas (BRA). Wilkinson came into Tahiti as World No. 1, but his 9th place finish will move him down to 3rd on the Leaderboard. The Australian will now look to Trestles to climb back to the frontrunner position and strengthen his World Title campaign.

The next stop on the 2017 World Surf League Championship Tour will be the Hurley Pro and Swatch Women’s Pro at Trestles. The heated WSL Title race will continue in San Clemente, California as the world’s best surfers will take on Lower Trestles from September 6  through September 17, 2017.