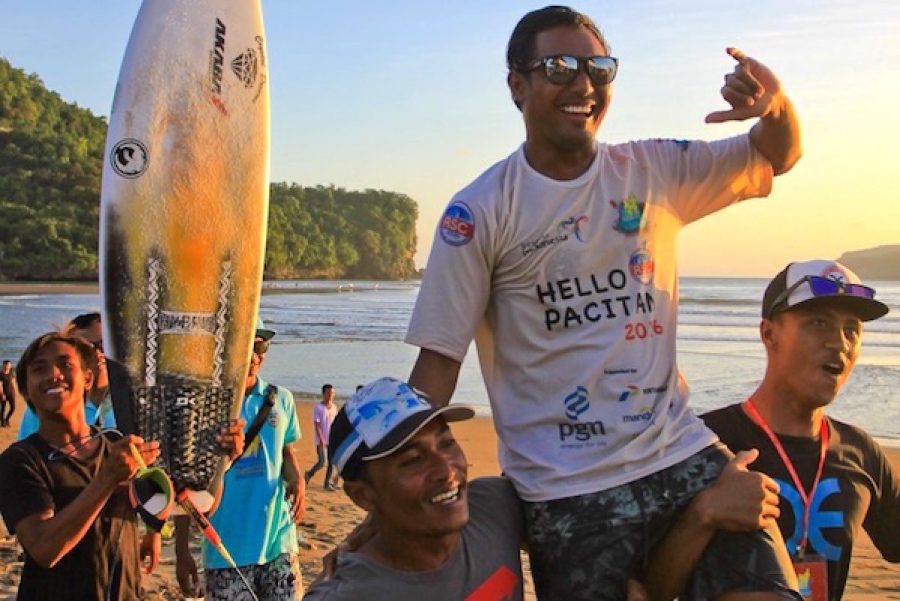 Raditya Rondi was the best surfer at Pacitan Tim hain

.....and receive a winners check of Rp 15 million (approximately $1,200 USD) and a beautiful stone trophy as well as 250 ASC championship points.

The final, which was witnessed by several hundred spectators on the beach, saw the lead change back and for several times between Rondi, who is a 3-time Asian Surfing Champion and a 1-time Indonesian Champion and the young 16 year old Waida, who just recently returned from a trip to California where he won the Young Guns/King of the Groms international competition for 16 year old and under surfers.

With Waida in the lead going into the remaining minute of the 30 minute it looked like the win was solidly in hand, as there were not many larger waves coming through and Rondi needed an excellent score of 8.33 to regain the lead. Then Rondi lost his priority by taking off took off on a smaller wave and kicking out almost immediately, seeming to be a big mistake that would cost him the final.  But then, side by side with Waida with just 30 seconds to go, Rondi turned and took off an a next wave in a desperate last attempt…and the wave just seemed to get better and better as it peeled down the sandbar.  After he had squeezed every possible turn out of it, he and Waida both waited anxiously in the shallow water waiting for the MC to call out the judges score….which came in at a big 8.80! 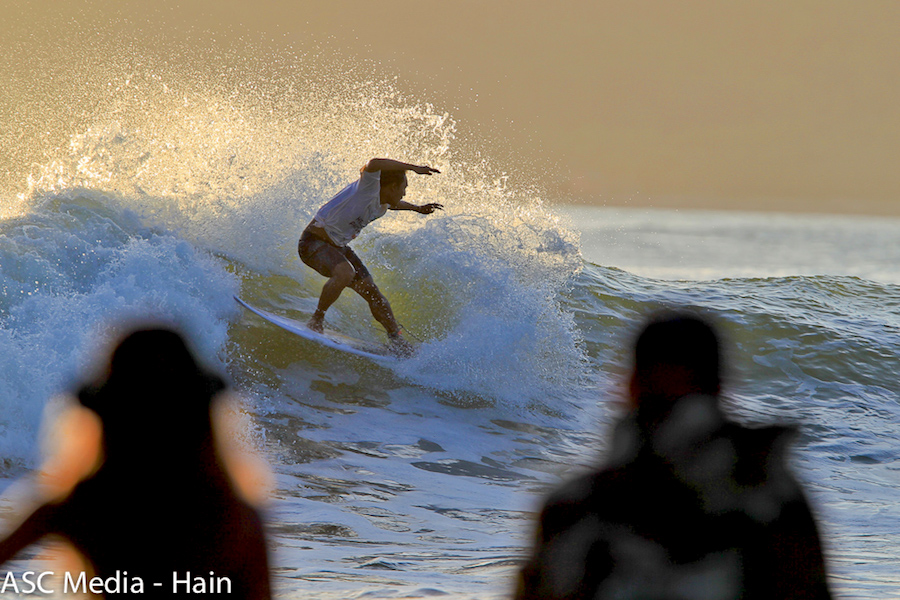 *Rondi on his way to the victory at Pancer Beach - Pacitan

After being chaired up to the judge’s tower, Rondi was tired but elated with his win.  When asked to describe his final, he explained, “For the first 10 minutes out there both us of couldn’t hear our scores because of the wind, so we didn’t know who was leading.  Then finally we could hear and I found I was in the lead, but then Rio got a medium sized wave and a good score that left me needing like an 8.4.  I tried so hard to get that score but it wasn’t easy.  And when I lost priority by trying for that one wave at the last minute, I thought it was all over.”

And that last wave?  “I saw the wave and I acted like I wasn’t going to go, so Rio didn’t go either, but then I just took off and lucky for me it doubled up on inside so I could make lots of turn and thankfully it was enough,” he replied.

When asked about his experience here in Pacitan and the Pancer Door wave, he replied, “I really like this wave, as it’s great lefthander and being a goofyfooter (right foot forward on the surfboard) it’s perfect for me.  But it’s good for beginning surfers also as its not dangerous with a sand bottom, so everybody can come here to surf it and have fun.  For us pro surfers, it is still challenging because it’s a long wave and requires lots of stamina as well as good wave selection and the ability to do lots of maneuvers.  I’m already looking forward to coming back again next year!”

The Women’s Division final was won on Day Two by Japan’s Rina Kitazawa over Taina Izquierdo (Indo/USA), and had past Indonesian President Susilo Bambang Yudhoyono hand her the trophy and winner’s check beachside.  This was Rina’s first ever trip to Pacitan, and she was ecstatic with her victory.  “I feel like it was a great win for me, because it was so hard out there against those other girls.  The sand bar was really nice for my final, the waves were so good!”

A total of 8 women from countries including Indonesia, Japan, Argentina, and Taiwan competed in ASC Women’s Division for a Rp. 25 million prize purse, and 32 men from three countries (Taiwan, France, Indonesia) competed in the ASC Men’s Open Division for Rp. 50 million in total prize money.


“On behalf of the ASC, I would like to sincerely thank all the supporters and sponsors of the Hello Pacitan 2016 event,” said the ASC’s Tim Hain.  “It was a very well run and well organized event, thanks to Dyah Putri and her crew, and for the surfing competition I can’t say enough good things about the Pacitan Surf Club.  They gave us everything we needed to run a professional event, and took great care of us, so here is a big thanks to Aji, Momon, Sabun and all their crew!  And of course we thank the Regent and Vice Regent of Pacitan, and especially Mr. Wasi the head of the Pacitan Tourism for his daily attendance and support of surfing, as well as the Ministry of Tourism and the many sponsors.  We hope that the Hello Pacitan event can be a permanent part of the ASC schedule for years to come, and that we can help Indonesia get some gold medals for surfing in the 2020 Olympics in Japan!”