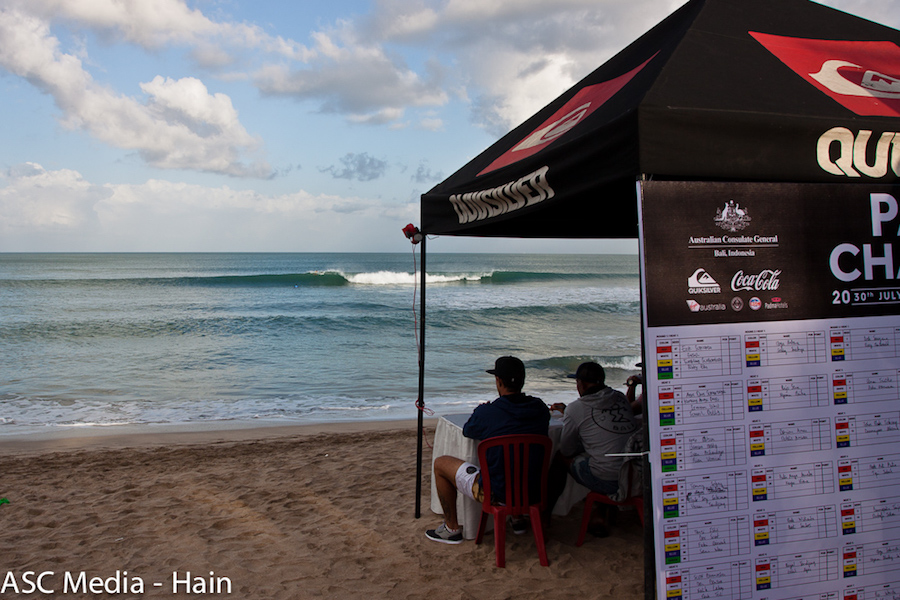 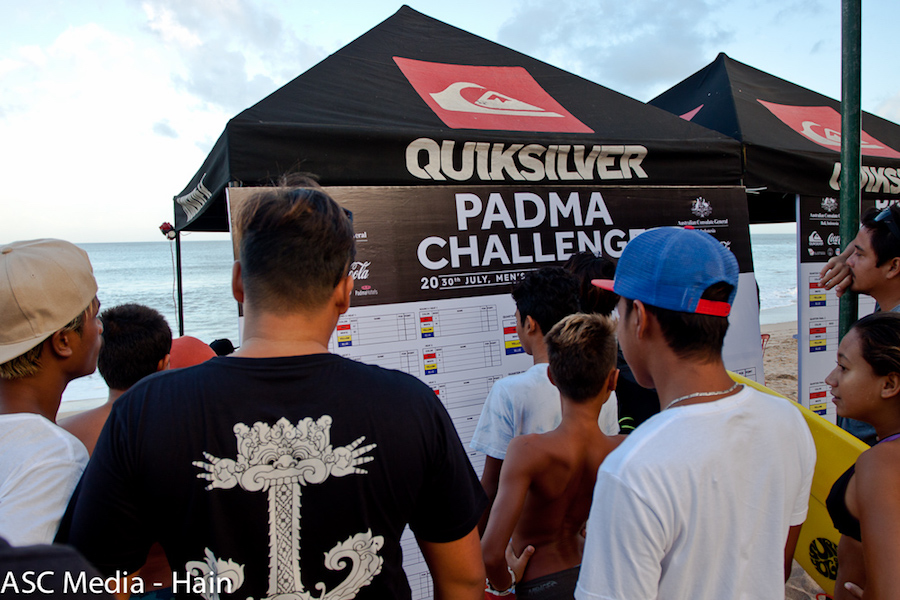 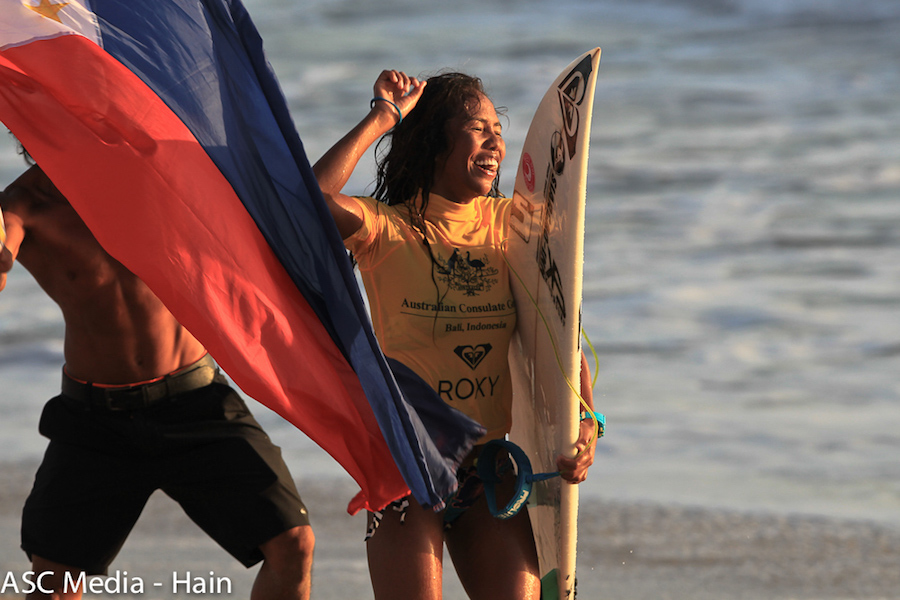 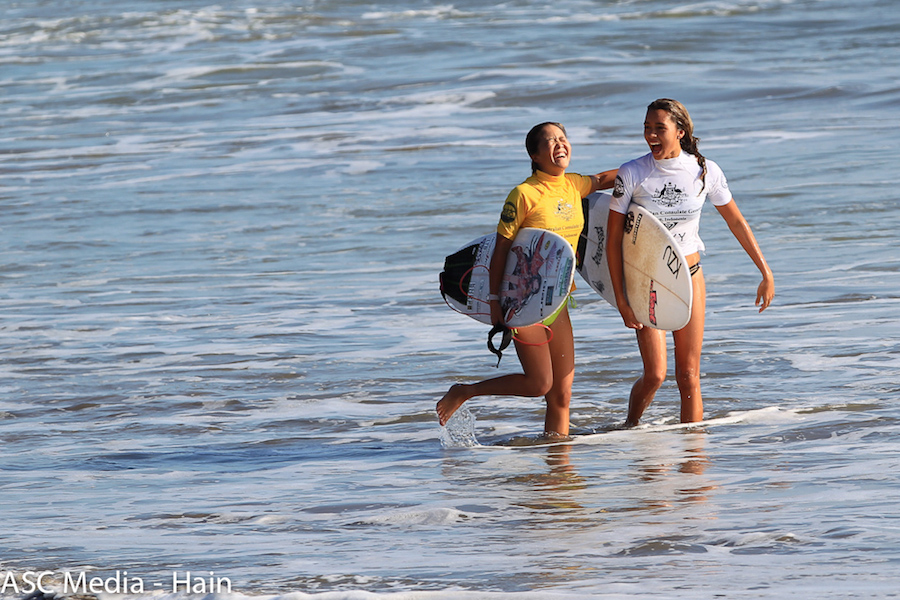 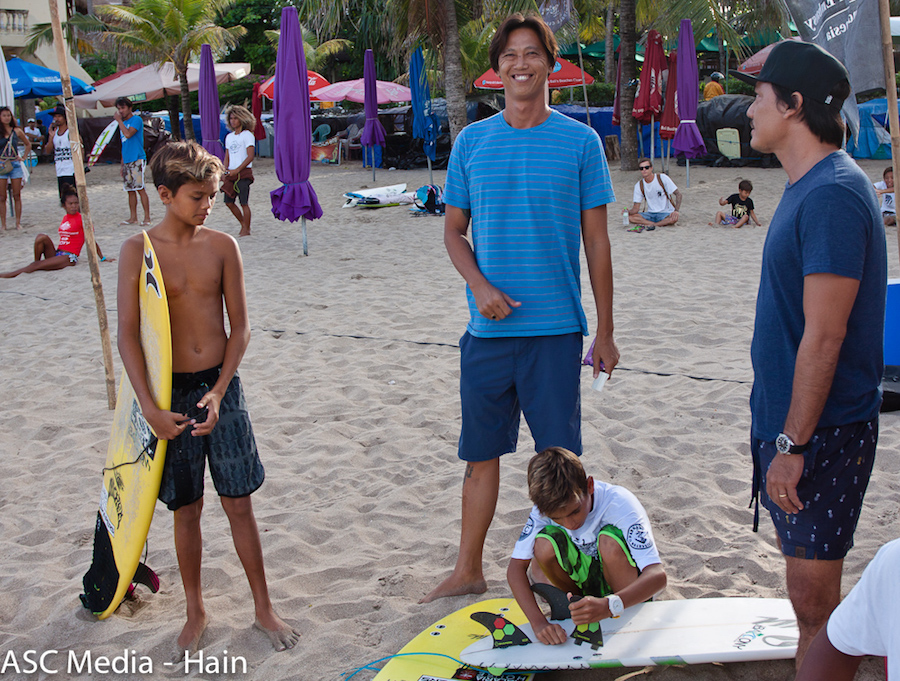 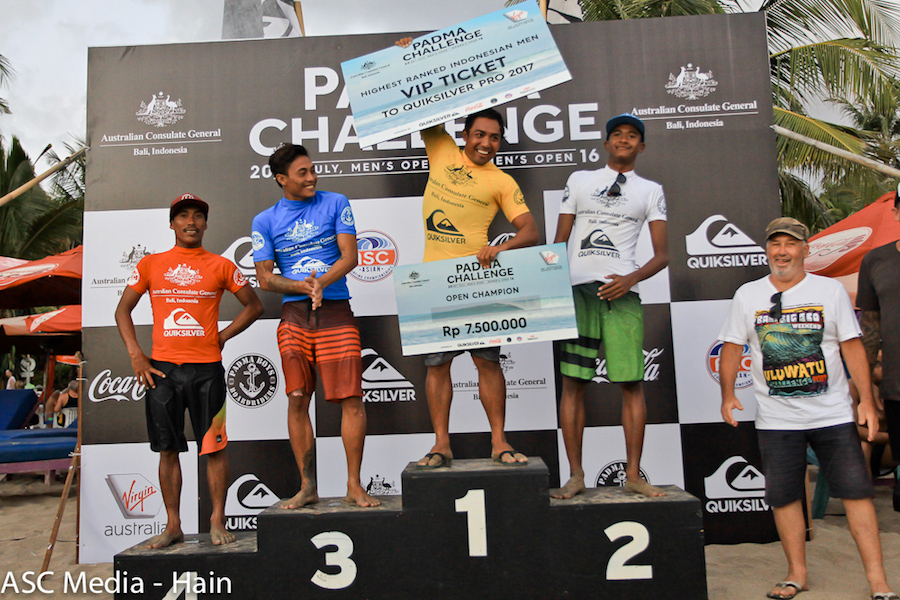 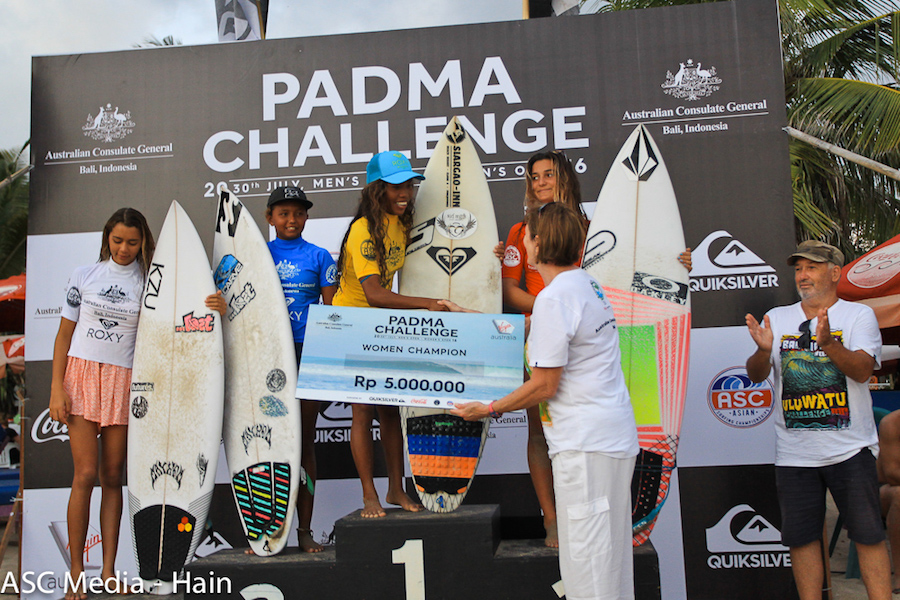 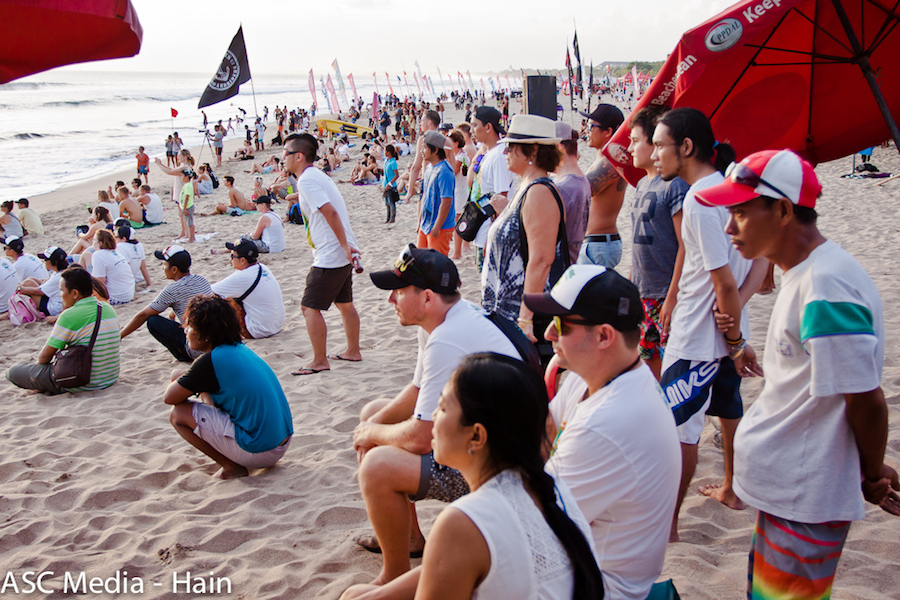 Capping off the end of a long day of intense competition at the Quiksilver Padma Challenge presented by the Australian Consulate General, the Men’s and Women’s Division finals won respectively by 4-time ASC champion Raditya Rondi from Kuta, Bali, and Nildie Blancada who hails from Siargao Island in the Philippines.

The full day of competition saw 64 men and 12 women competitors from countries including Australia, Argentina, Indonesia, Japan, Taiwan, and the Philippines battling it out at Padma Beach in Bali for prize money, points, and prestige as part of the 9th annual Bali Big Eco weekend that is put on by Quiksilver and Coco-Cola Amatil Indonesia.

In Men’s final it was in form Raditya Rondi posting two of the highest scores of the day’s competition, a perfect 10 points (out of a possible 10) and another 9 points for a total of 19 points out of 20!  He was up against fellow Kuta Beach local Garut Widiarta and Padma Boys Raju Sena and Made Darmaysa.  At one point Rondi had all the other finalists in a combination situation by ripping apart the lefthander all the way to the sand, and it was clear he was giving no quarter.  “I knew going into this final it would be hard to beat these Padma boys, but I’ve been surfing out here in the afternoon the last couple of day and there have been some good lefts coming through.  So I just had to get lucky and get couple of them,” said Rondi. 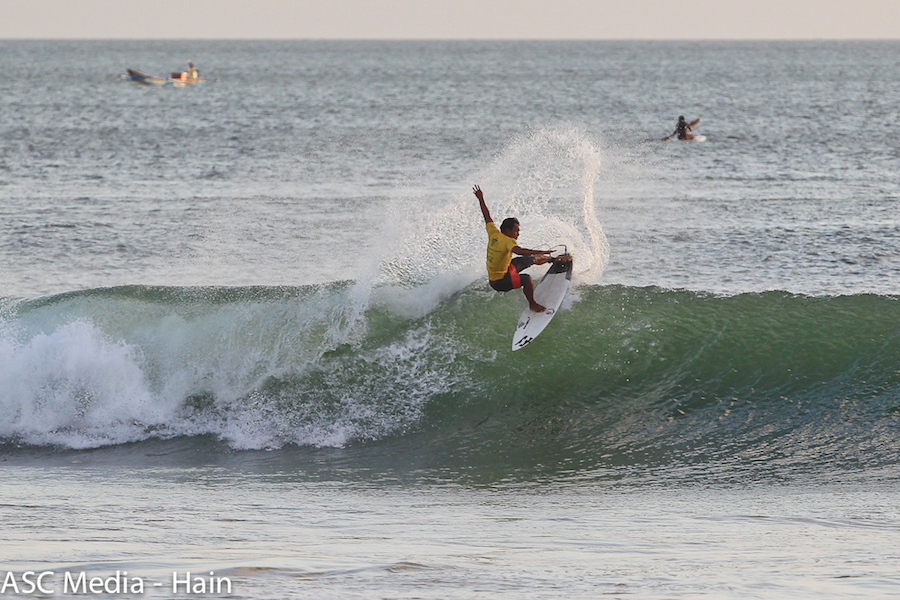 “When I got that 9 I knew I had a chance to win the final, and then when the judges gave me that 10 for my next wave, I knew I had it won!  I just got back from Japan where I got second in a contest, so it’s great to come home win one in front of my friends and family here.  I’m stoked to win the comp and get the chance to go to Australia!” he explained.

The Philippine’s Nilbie Blancada also dominated her final, finding the righthander perfect to rip apart and score big points and her first contest win in Indonesia.  “I’m really stoked that I won!” said Blancada.  “Finally I did good at Padma!  The waves were really good in the final, and when I would hear my scores getting better it motivated me to surf even better.  I was nervous for sure…but so happy now!” she added. 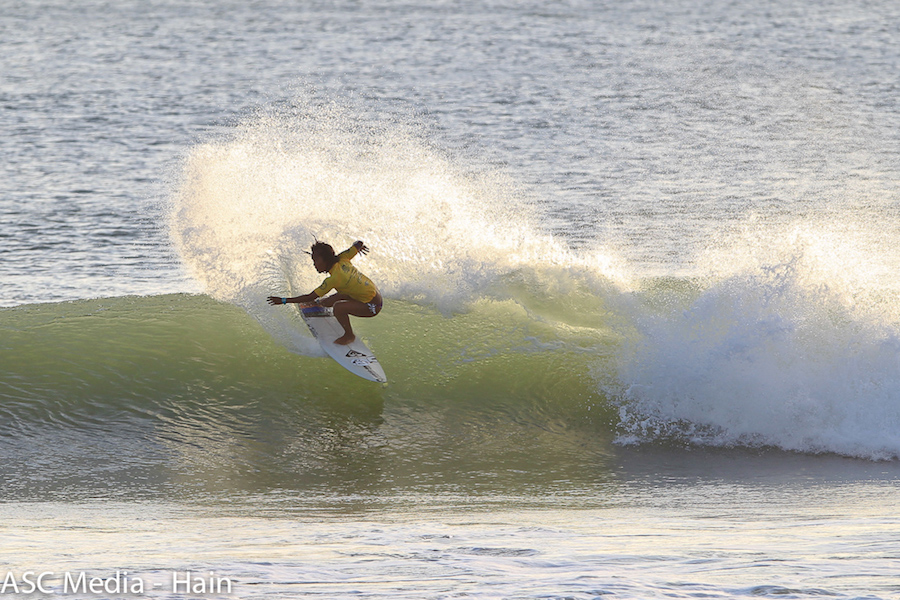 As a special reward for their performances, Raditya Rondi and Cinta Hansel (who got third in the Women’s division) as the highest ranking Indonesian finalists in today’s competition will receive Virgin Airline flights to Australia’s Gold Coast with VIP passes to attend the Quiksilver Pro in 2017, as well as a surf training session at the Surfing Australia High Performance Training Centre in Casuarina….a once in a lifetime experience supported by the Australian Consul General, Bali.

“It’s a great opportunity!” said Hansel.  “Such a great gift by Australian to Indonesia.  It will be so fun being at the Quiksilver Pro watching all the best surfers in the world, and being able to learn how to surf like pro!”

When asked why the Australian Consulate and Embassy decided to support this event and provide this award, Australia’s Consul-General Helena Studdert explained, “The first reason is because of the conservation message of the Big Bali Eco weekend, and the second was because of surfing.  There is a big link with Bali and Australia and that’s surfing…over a million tourists come here every year from Australia and it’s really on the back of surfing.  And the third reason is for supporting youth, to be able to send a couple of the surfers to Australia, which will continue to strengthen the links.”

And her reaction after watching the final? “This was a fantastic final to watch" she replied.  "The talent of these surfers is amazing.  I’m not a surfer myself but I’ve heard that Indonesia has a lot of surfing talent…and very happy I got to see it today in person and can verify that it’s a fact!  And I’m that we can help support it’s growth by giving this award.”

When asked for a comment on the event and the final, PT Quiksilver Indonesia’s CEO Paul Hutson replied, “That final was amazing.  The competition that goes down here in Bali for those that know, between the Halfway boys and the Padma boys, it’s like the local derby in football.  So to see two of the best Padma boys and two of the Best Halfway boys out there knocking it out in the final with the waves pumping and the sun setting, what could be better!  Congratulations to Raditya and Cinta for being the highest ranked Indonesian surfers, and to Nilbie from the Roxy Philippines for winning the women’s, she ripped all day.  This event is a testament to our commitment to support the ASC and to have another great event on the tour.”

Through the Bali Beach Clean Up program (BBCU), CCAI and Quiksilver clean up 9,7 km of shoreline everyday throughout Bali’s 5 iconic beaches: Kuta Beach, Legian Beach, Seminyak Beach, Jimbaran Beach, and Kedonganan Beach.  Since 2007 BBCU has collected more than 30 million kilograms of rubbish to minimize the impact of waste on the beautiful beaches of Bali, strengthen the tourism industry which will contribute to the welfare of the local people, and support the Bali Government’s program of creating a ‘Clean and Green’ Bali.