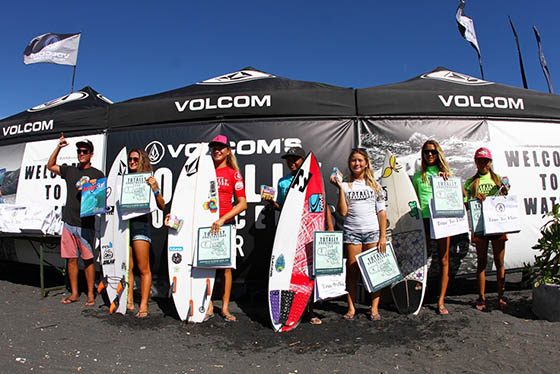 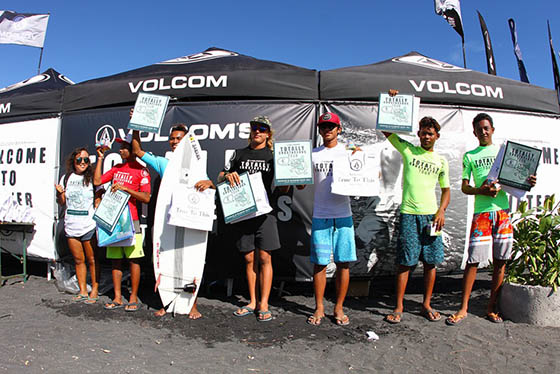 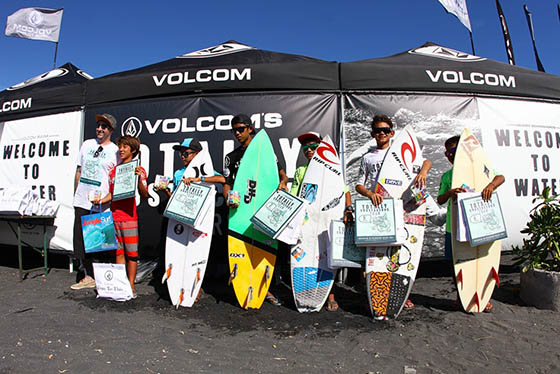 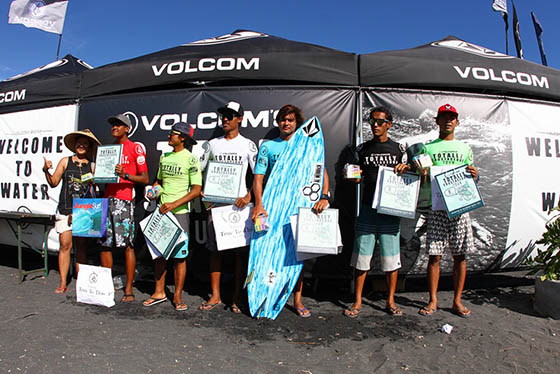 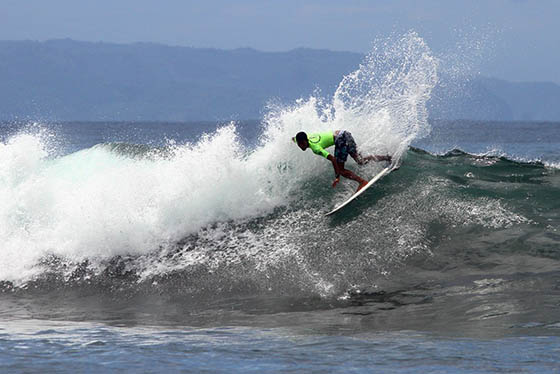 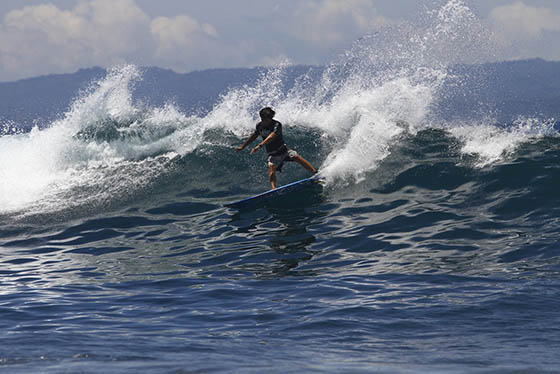 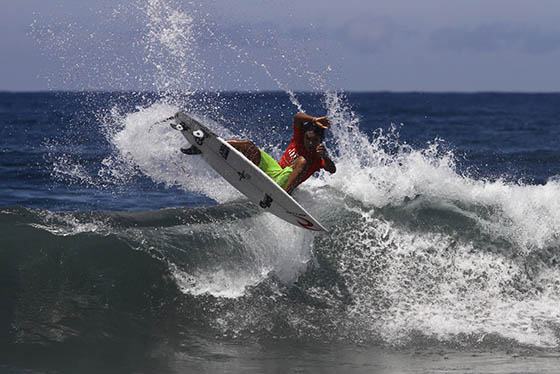 The Geckofish opener of the 2016 Volcom Totally Crustaceous Tour at Lembeng Beach in Sanur saw a record setting 132 kids across four divisions on competing for fun, prizes and a qualifying spot in the TCT Indonesian final coming up on August 14th at Kuta Beach.

Luckily the waves absolutely pumped for the majority of the event, allowing both the reef break and the beach break to be utilized for a double bank system with two sets of judges.  Volcom’s Ribut Wayudi put his years of experience to good use and with his team did a masterful job of handling all the details, so with an 8 am start managed to get everything done and dusted by 3:30 pm.

“Last year we had around 100 kids at this event,” said Wayudi.  “So this year when I saw how many entries were coming in I know we had to find a way to handle it, as we just don’t want to turn anyone away.  Going with 6 man heats and two sets of judges were what it would take, so that’s what we did.  Thankfully the waves were really good, and everything worked out,” he explained.

“The waves today were just about as good as this place gets,” said Richard Johnson whose daughters Puanani and Kailani both made it into the Girls final.  “We come here to Lembeng a lot, and especially the last week to practice for the event, and today was definitely the best I’ve seen it here in a long time.”

Maybe it was the Balinese Hindu ceremony that was taking place at the beach that morning or because it was Easter Sunday, probably both, but good karma and good vibes were all around, just ask Under 16 winner Ketut Agus.  “I’m so happy!  The waves were pumping from the morning, everybody was ripping, so I’m lucky to be the winner.  In the final the waves were more tricky, but I just tried my best,” said Ketut.  The kid from Kuta Beach simply dominated the final, racking up a two wave total score of 11.33 points leaving second place Ivan Prihandoyo a long way to go with his two wave total of only 7.17 points.

New for this year at the Volcom Totally Crustaceous tour is the sanctioning of the Under 16 division by the Asian Surfing Championships, where the Under 16 groms will get points in each Volcom event towards the 2016 ASC Junior Division Championship.

“It’s great for the Under 16 groms to get ASC points now, as it give them something extra to work hard for,” said Volcom

MC Muklis Anwar, whose voice was almost gone by the end of a long day of calling heats.  “It was also really good to be using the ASC computer system, so the kids know their scores during the heat, even though it gave me extra work on the microphone! But it’s all good,” he said laughing.
In the Under 13 division it was Roy from Japan that took the win over perpetual podium climber Dhani Wardianto.  Roy and Dhani both showed some very mature surfing on the beachbreak righthander, pulling off aerials as well as some fin free turns.
The Girls final had a nail biting finish, as Volcom team rider Puanani Johnson had jumped into the lead using her local knowledge pick off one of the longer waves of the final and shred it apart all the way to the inside.  Due to the high tide many of the waves failed to connect, making wave selection critical, but Pua soon added another good score and looked to have the win solidly in hand.  But with two minutes left Volcom teammate Giada Legati found a runner and squeezed out a score of 4.7 points to take the lead, leaving Pua requiring a wave score of 4.4 points to regain first place.  She got her chance with 30 seconds left and gave it everything she had, but had to settle for second place when the judge’s score came in at only 4.1 points.
In the Pro Am division, it was Padma Beach local Raju Sena taking his first Pro Am victory after winning last year’s Under 16 division.  He is also a 3-time ASC Junior champion.  “I almost didn’t make it today as I had the flue and didn’t feel good this morning, but I feel much better now” said Raju with a grin.  When asked what the key was to his victory today he replied, “ It was heavy out there in the final, with 6 guys out there and all of them ripping, and the current was strong and some wind, but I’ve been training hard, going to school, give respect, and of course I pray to the gods, so maybe that’s why.”

All the finalists in all divisions at the Geckofish event gain automatic entry into the TCT Indonesia Final, which will take place on Halfway Beach in Kuta on August 14.

Up for grabs is 35 million rupiah in prize money, along with 5 surfboards from Voodoo and all kinds of goodies from Volcom, Carve, FCS, Bali Wacks, Sunny Days Zinc Sunblock, and last but not least each winner and runner up will receive 3 days/2 nights at FRii Hotel in Echo Beach
At the end of the day, Volcom Marketing Manager Raymond Jansen was stoked with what his team had accomplished, saying “I was shocked at first when I saw the number of kids that signed up, but we hate to turn anybody away so we tried to accommodate everybody.  Organizationally it seemed to go really well so I can’t be happier!  Having the ASC judges and the computer judging system really added something extra, being able to hear the scores during the heats and especially in the final, so we’re glad we can bring this into our events now.”