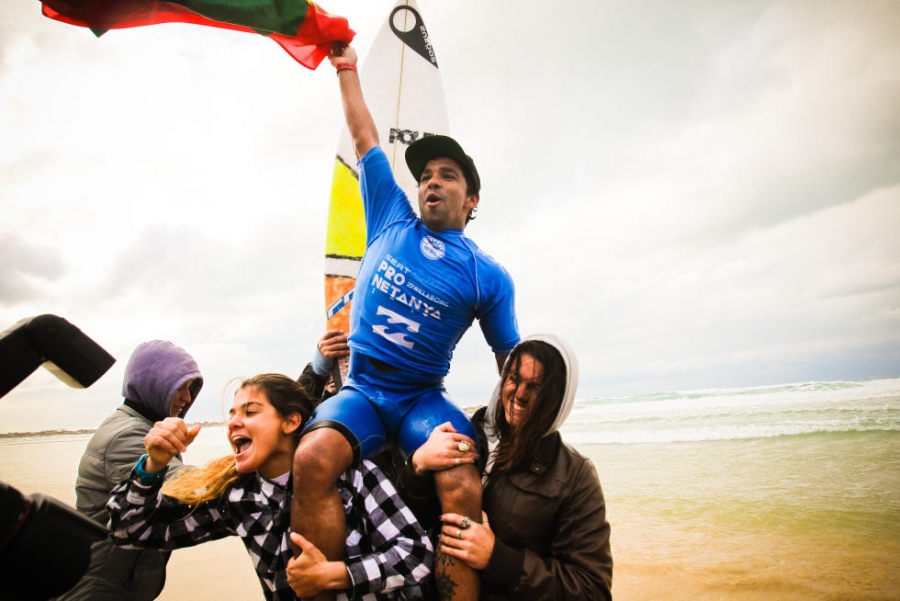 Henrique had a near-perfect campaign in Israel, claiming five heat wins including several of the event's highest single wave scores and combined heat totals to finally claim the US$10,000 check and 1,500 ranking points. The former CT competitor demonstrated the variety of his surfing repertoire with big airs and solid carves all throughout the event's waiting period.

"I'm over the moon, I came here not feeling 100 percent and managed to build my form in this event so to finally win is incredible," Henrique reflected. "I'm going to go home and train more to be ready for the next events, it's amazing to start the year like this but the season is long. This was one of my favorite trips ever, I didn't know what to expect and was pleasantly surprised by everything. The people were incredible to us, the places we visited have so much history and we also got some fun waves."

In the women's division, Maud Le Car started her final with a solid seven-point ride and right away applied pressure on her opponent Camilla Kemp (PRT), 19. An experienced competitor and fresh off another win in California, Le Car quickly backed it up and was never put in danger in the Final, eventually collecting the 1,000 ranking points on offer and the prestigious first-ever Israeli QS title.

"I'm super happy, I feel like I'm on a good roll and that all the work put into it starts paying off," Le Car stated. "I've managed to stay consistent in very different conditions over these past two events and that gives me a lot of confidence for the next ones. I was surprised with the quality of waves we got here and I'm stoked to have seized the opportunity to come to Israel. The local surfers here start to be really good and I hope they will continue to improve, they have good conditions and the potential to succeed."

Kemp, who had just placed equal fifth in the Ericeira World Junior Championships a couple of weeks earlier, confirmed her good form in Israel with three wins on her way to her first-ever QS final. The young Portuguese got busy in the lineup and took a lot of waves but couldn't quite find the open shoulders to perform her best surfing and had to settle for runner-up.

"It was so difficult out there, I'm a little disappointed but still pretty happy with that result overall," Kemp admitted. "Maud is a great surfer and it was a pleasure to surf a final against her. I had a really fun stay here, we had some good waves on and off the event and it was a great experience all together."