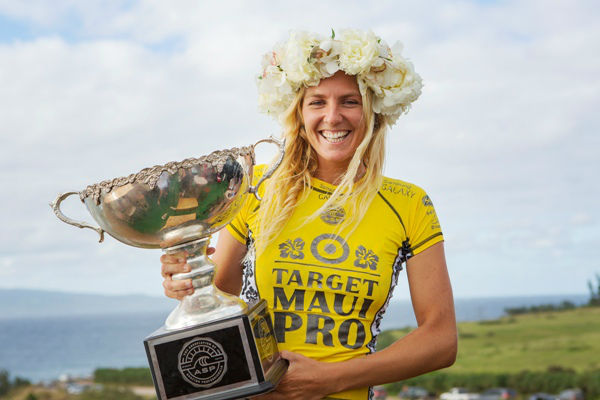 After elimination at the hands of Courtney Conlogue (USA) in the Quarterfinals, Gilmore spent most of the day waiting to find out whether she'd win a sixth Title. Conlogue, who posted the only Perfect 10 of the competition, went wave-for-wave with Gilmore and won in the final minutes, with a 13.67 (out of a possible 20) to Gilmore’s 13.03.

With Gilmore out in the Quarters, the door was open for the two remaining Title contenders -- Sally Fitzgibbons (AUS) and Tyler Wright(AUS) -- to take the Championship. All that was left for Gilmore to do was sit on the sidelines and watch the drama build.

Heading into the Semifinals, the only women's Title contender left in the competition was Wright, who would meet reigning World ChampionCarissa Moore (HAW) in a close Final. If Wright won the Final, she would push the World Title to a surf-off. But Moore, who was out of the race as World No. 4, was primed to play spoiler. Moore scored three nine-point rides during the course of the Target Pro, and her 9.73 in the dying minutes of the Final sealed the deal, sending her to the top of the podium -- and Gilmore to the Champion's trophy.

"That was probably the most emotional I’ve ever been watching someone else surf in my life,” Gilmore said. “I know how focused Tyler is and I was completely prepared for a surf-off. However, I also knew how incredibly capable Carissa is at virtually every venue. I feel like I had a year’s worth of emotions packed into one heat. I won my first title here at Honolua Bay, but after my loss in the Quarterfinals, I was prepared for anything to happen. I’m really emotional right now.

“The caliber of surfing on tour this season is the highest it has ever been. There are no easy heats. This was the hardest Title I’ve ever won."

Another Top 17 surfer found success on different front: Current World No. 8 Johanne Defay was named the 2014 Rookie of the Year. In company with surfers including Moore and Gilmore, Defay will officially be honored at the ASP Awards.