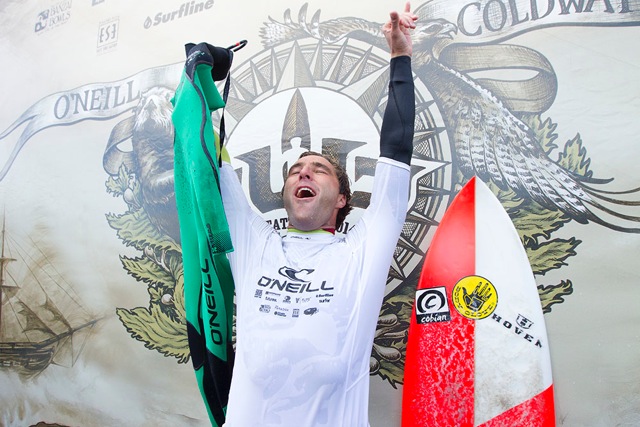 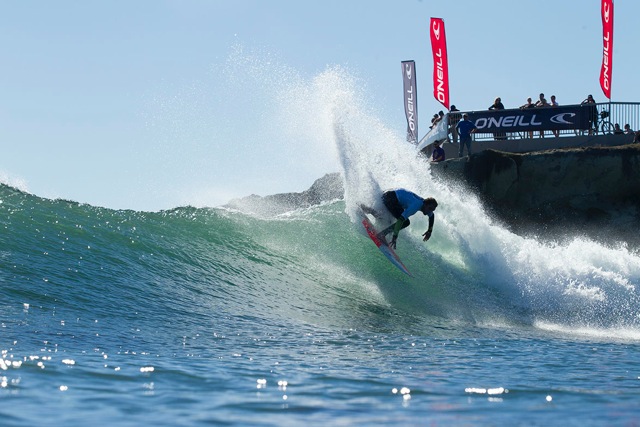 Nathan Yeomans (San Clemente, CA) claimed the 2014 O’Neill Coldwater Classic Invitational title today earning the life-changing winner-take-all yearlong O’Neill Wetsuits sponsorship worth $50,000. 2014 marks the second year for the ASP Specialty Event to run with an unconventional format pitting 16 unsponsored surfers against each other for one grand prize. This is a second O’Neill Coldwater Classic win for Yeomans who also earned the title back in 2009 when the contest was an ASP 6-Star World Qualifying Series event.

Thursday, the second and final day of competition, conditions were a bit trickier and sometimes wave-starved with the west-northwest swell continuing to fade and wave faces in the two-to-four foot range.

The first Quarterfinal heat of the day saw touted wildcard Jeison Torres Abarca (CRI), who snagged his spot into this year’s event from a public online voting contest, unable to advance after narrowly losing with a 10.93 heat total (out of a possible 20) to Huntington Beach’s Jack Boyes with an 11.20.

Sole local competitor and fan favorite Shaun Burns won his Quarterfinal match against last year’s second runner-up Wade Carmichael (AUS) as well as his Semifinal heat against Jack Boyes to earn a spot into the Finals.

In the second Semifinal, Yeomans took on Australian Garrett Parkes, both showing superior surfing and the highest scores on Day 1 of competition, but ultimately Yeomans won out with a 12.66 over Parkes’ 8.44 earning his Finals berth.

The Final, pitting former Coldwater Champion Yeomans against local-boy Burns, saw the two going wave for wave in the opening 15 minutes before going on hold due to fog.  After competition resumed, Yeomans claimed the win with his electric backside surfing, locking in a 15.00 heat total over Burns’ 12.83.

In addition to the trophy O’Neill wetsuit and $1,000 and a set of tires from Nexen, Yeomans earned a yearlong sponsorship from O’Neill worth $50,000 to pursue his elite pro surfing aspirations.

When asked about the win, Yeomans exclaimed: “It’s frickin’ awesome.  I can’t even believe it. I was doing job interviews before I came up here. Luckily I don’t have to work too hard for awhile now. I have another baby on the way, so luckily I have 50 grand to support that little critter. I’m going to the Triple Crown next, so hopefully I can take this momentum there.“