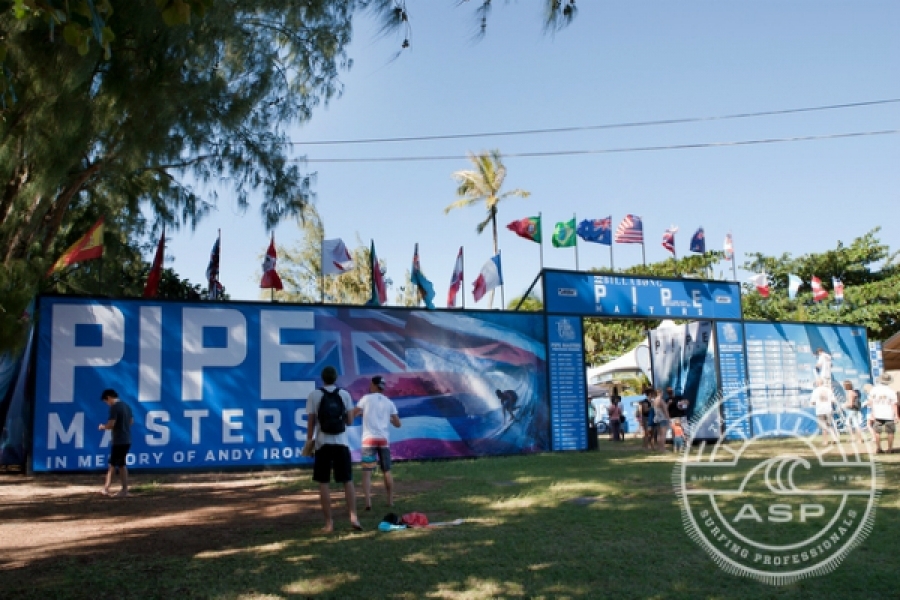 The Billabong Pipe Masters in Memory of Andy Irons has been on hold for the last three days with smaller surf at Pipeline and Backdoor, but Surfline, official forecasters for the Vans Triple Crown of Surfing, are calling for epic conditions to ignite the deadly reef tomorrow. The current swell marching towards Oahu’s North Shore should see the world’s best surfers go blow-for-blow in epic conditions, providing the perfect scenario to decide the 2013 ASP World Title. Surfline delivered the updated forecast. Here is the breakdown:

BRIEF OVERVIEW: A large NW swell is on the way, due to rapidly build in over Friday afternoon/night, peaking by Saturday morning with 10-18′+ faces at Pipe. Meanwhile, light offshore SE wind is expected to greet this swell on Saturday. This swell backs down Sunday into next week, with another very solid but partially shadowed WNW swell possible for the 19th-20th (still pending development).

SWELL/SURF: Old NNW energy dropping out, mainly under head high in the morning. New NW swell builds in (primarily over the afternoon/night) with overhead to well overhead sets rising up at Pipe before dark.

WIND/WEATHER: Calm to very light/variable offshore wind in the early morning with mostly cloudy skies and occasional passing rain showers. Then a light to moderate SE veering ESE-East wind rises up mid morning and through the rest of the day with partly cloudy skies.

SWELL/SURF: Large NW swell offers consistent double to triple overhead+ sets at Pipe (faces running in the 10-18′+ zone). Some 2nd reef roll-ins to be had and the occasional rogue 3rd reef wash throughs. Strongest through the morning, then becoming a bit more tame over the afternoon. Primarily Pipe, mostly closed out at Backdoor.

WIND/WEATHER: Calm to light/variable wind in the morning, light+ seabreeze developing in the afternoon. Partly to mostly cloudy skies.

WIND/WEATHER: Light to moderate East-ENE Trades rising up through the day with partly cloudy skies.

SWELL/SURF OUTLOOK Its on the way! A strong storm recently flared up over the central NPAC through the past 24hrs or so, developing a large fetch for Hawaii of which a good swath of wind speeds reached up to 40-55kts+. Other good qualities of this storm is that the track was rather slow and it came within fairly close proximity (roughly 1200-1500 miles out to the NW-NNW). As a result, a large NW swell (305-335 deg) will fill in over Friday (primarily over the PM with a rapid build), topping out through the early AM hours on Saturday.

Pipe will be at max capacity on Saturday with consistent double to triple overhead+ sets marching in, some larger 2nd reef roll-ins, and occasional rogue 3rd reef wash throughs. The peak of energy will be Saturday morning, then easing some and becoming a little more tame over the afternoon. Currents will be strong, especially on the inside. NOTE – This swell is very similar to slightly bigger than the Black Friday swell we had on Nov 29th. Also, spectators on the beach should exercise caution at all times, sitting close to the water’s edge is not advised. This swell will be fading over Sunday (still well overhead) and continuing to decline through the first half of next week, while gradually shifting a little more NNW’erly (320-340 deg).

Further out; Models indicate that more storm activity may soon push off Asia and develop over the Northwest Pacific through the next several days. Therefore, things are looking promising for next week; first a fun size NW swell (305-325 deg) for around Tuesday the 17th, then potentially another large WNW swell (280-310 deg) for the 19th-20th. NOTE – If this pans out has currently forecast, then Oahu will feel some considerable shadowing by Kauai on this westerly angled swell. Nonetheless, plenty of energy will still get into the North Shore. Keep in mind that this still needs to develop!

WIND/WEATHER OUTLOOK Hawaii will be under the influence of weak high pressure over the NE Pacific, as well as a front that is slowly approaching from the NW. We’ll see light to moderate ESE’erly Trades rise up for the day on Friday, starting out with calm to very light/variable offshore wind in the early morning. As the front nears, the wind will become light and veer SE on Saturday, then very light/variable southerly wind is expected by Sunday. Possible light onshore seabreeze developing for all areas in the afternoon. Meanwhile, expect cloud cover to gradually increase over the rest of the week, as well as chance for rain.

The front discussed in the SHORT TERM FORECAST above looks like it push through the Islands late Sunday/Monday, with light/variable wind. Then high pressure and light to moderate East-ENE Trades gradually return over Tuesday through mid week.