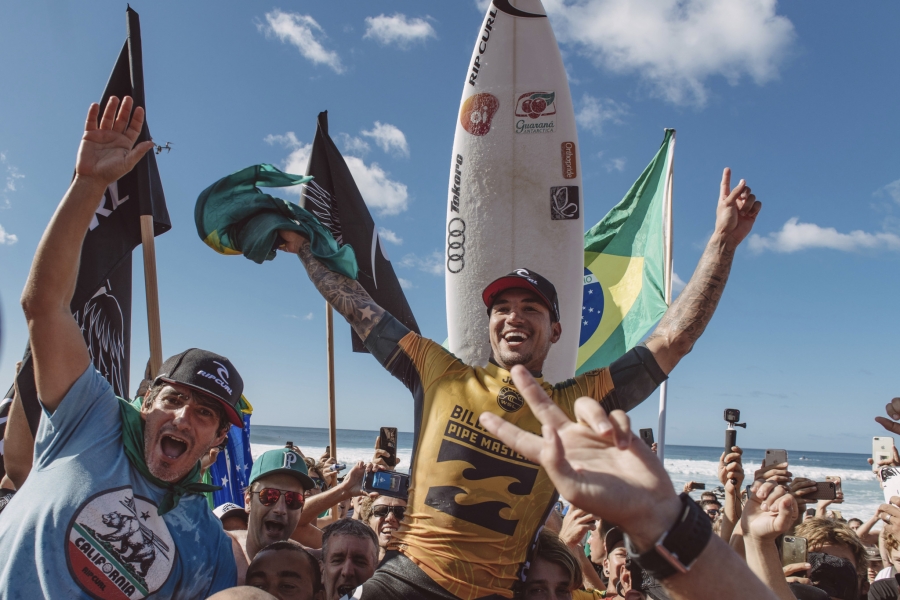 Medina then went on to win the coveted 2018 Pipe Masters, further securing his #1 position for the year.

“I am so happy right now, I can’t even describe it. All of the hard work, all of the years and the time my family and I have put in to this Title… it has all paid off,” he said, with tears in his eyes just after the moment of celebration. “And to have it happen here, at Pipeline on Finals Day, in pumping surf, it is so incredible.”

Gabriel entered the start of the Pipe Masters the front-runner for the Title race, leading the rankings and putting his opponents, Julian Wilson and Filipe Toledo, in a difficult situation.

The result was in his hands for this event – if he made it to the Final Heat, he became Champion. And in the event he bowed out with an early loss, both Julian and Filipe would have to make the Final or win the event in order to overtake Gabriel.

Today, with the odds stacked in his favour, Gabriel Medina surfed his way through to the Final Heat at heaving Pipeline, one of the heaviest waves in the world, and clinched his second World Title. With an impressive array of heavy barrels and progressive airs, and excellent scores in every heat, he left nothing to chance.

“I knew what I had to do. The Title was in my hands, and the result depended on me,” Gabriel said. “I have felt good throughout this entire event, surfing a lot and having a good time. I have felt relaxed and prepared. I was ready for this.”

Gabriel claimed his first World Title in 2014, at the young age of 20, and changed the game for Brazilian surfing. He was the first-ever Brazilian to become a World Champion, and he showed the surfers of Brazil that it was possible to achieve greatness in the sport.

This second Title not only emphasises this, but also solidifies his place as one of the legends of surfing – and right now, the best competitive surfer in the world. He has joined the ranks of those few elite surfers who have been successful enough to win not just one World Title, but two.