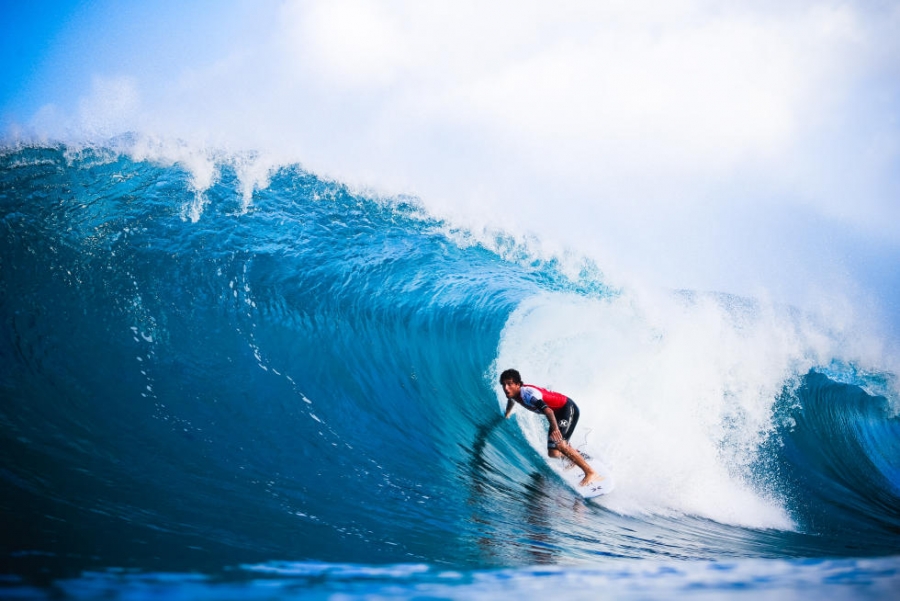 Clean conditions provided an ideal backdrop for an exciting day of surfing with all WSL Title contenders advancing through to Round 3 as Filipe Toledo (BRA), Adriano De Souza (BRA) and Julian Wilson (AUS) earned victories in their respective Round 2 heats.

The day began with current World No. 2 Toledo taking on former Pipe Master Bruce Irons (HAW) in a thrilling opening Round 2 heat. Toledo found himself in a morning gem that earned him the score he needed to put the heat out of Irons’ hands - keeping the Brazilian’s Title hopes alive after an upset yesterday.

Facing the 17-year-old Pipe Invitational Winner, Adriano De Souza (BRA) had to bring his best performance to take down Jack Robinson (AUS). Coming down to the last wave ridden, Robinson had a chance to end De Souza’s World Title dreams but narrowly missed the score needed by 0.67 as the buzzer sounded. De Souza has been fortunate to have the experience out here at Banzai Pipeline given to him by fellow competitor Jamie O’Brien (HAW) - one who could play a huge role in the Title race.

Also keeping his slim World Title hopes alive, Julian Wilson (AUS) charged past current Triple Crown of Surfing Ratings Leader Wade Carmichael (AUS) in Round 2, Heat 5 - nearly comboing the fellow Australian at the final horn. Wilson reflected on his day yesterday and took that motivation into today - never knowing what to expect from the beautiful beast here at Pipeline.

Returning to his first CT event since Jeffrey’s Bay due to multiple injuries, Jordy Smith (ZAF) posted the highest heat total of the day with a 16.00 - earning an 8.67 and 7.33. Participating in the Vans Triple Crown of Surfing this Winter, Smith is finding his form at the proper time as he looks to get as much competition in as possible.