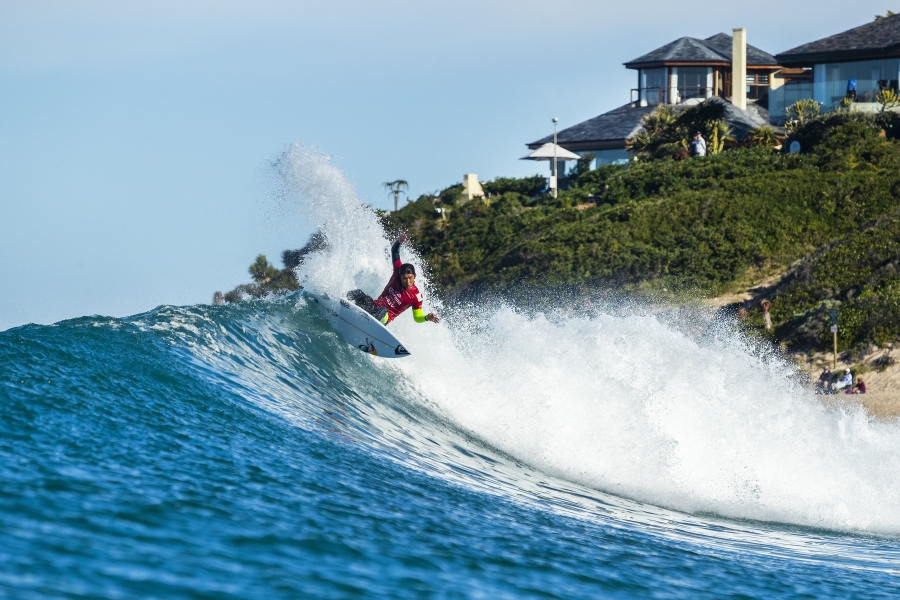 Kanoa Igarashi (JPN) locked in the highest heat score of the event so far, an excellent 18.04, against Gabriel Medina (BRA) and Griffin Colapinto (USA) at the Corona Open J-Bay. Credit: © WSL / Cestari

...at the world-famous Supertubes to determine the Quarterfinalists of Stop No. 6 on the World Surf League (WSL) Championship Tour (CT).

The All-Star heat opening Round 4 featured Jordy Smith (ZAF), Conner Coffin (USA), and Joel Parkinson (AUS) pitted against each other in a battle to make the Quarterfinals. The three surfers unleashed powerful turns in every set while racing to escape fast barrels. Parkinson took the lead in his opening exchange, while Smith kept busy to chip away at the 2012 WSL Champion. Meanwhile, California’s Coffin capitalized on the conditions to score a commanding 8.00 (out of a possible 10) to Smith’s 8.33. The heat came down to the backup scores where Coffin earned first with a 16.03 two-wave total (out of a possible 20), Smith second with a 15.56, and Parkinson eliminated in third with a 14.20.

“What an honor to surf against those guys at pumping J-Bay,” said Coffin. “It doesn’t get any better than that. To surf with Parko (Joel Parkinson) after he’s announced his retirement is such an honor. It has been so cool for me to get to know him. He is such a cool guy. I’m not really looking for any validation, but I love going out in a heat with really good guys and trying to bring my best. I’ve always felt a good connection with J-Bay so hoping I keep getting a few more.”

Parkinson, the two-time event winner, announced his retirement from the Championship Tour earlier this week. Parkinson’s 9th place result marks his final time competing at J-Bay, the event that launched his career in 1999. Parkinson will now finish the backhalf of the season knowing that it will be his last competitive Tour around the world.

“Those guys have become my favorite J-Bay surfers of the modern era, so to be against them was just an enjoyable heat,” said Parkinson. “The saddest thing about that heat was knowing that was the last time I’ll ever have priority ever at a J-Bay wave. That is probably the only thing I will miss about being on Tour, there are a lot of other cool things I suppose, too, But, that one thing is the thing that probably drives you to want to be on the pro tour - to have priority and have the lineup to yourself. I know it is fresh, a loss, but I feel like I’ve won. I am so thankful for all my family on the beach. I am really stoked for what this wave has done for me. The career I’ve had here, I am proud of myself for it. Thank you to everyone who has supported me from the start here.”

Current World No. 1 Julian Wilson (AUS) is through to the Quarterfinals after winning the second heat of Round 4. Wilson took down compatriot Wade Carmichael and 2017 event runner-up Frederico Morais (PRT) with a 13.66 combined score after patiently waiting for this winning wave. Carmichael also advanced to the Quarterfinals with his second-place finish, dispatching Morais by just one-tenth of a point. The disappointing loss for Morais sees him exit in Equal 9th.

“I waited for about 12 minutes for that heat,” Wilson said. “I only needed a 5.00 to get past Freddy (Morias) into second, but I knew that I needed around a 7.50 to get past Wade (Carmichael). That was what I needed to be looking at, especially with a good set coming through and Fred having second priority. I picked the right wave out of the set. I surfed the wave pretty well. I was really happy to get the score.”

Filipe Toledo (BRA), 2017 Corona Open J-Bay winner, continues to light up Supertubes with outstanding scores. The Brasilian fired off a near-perfect 9.50, his fourth excellent ride of the event so far, and a 7.73.
Toledo currently sits at World No. 2 on the Jeep Leaderboard and is now one step closer to defending his event title. Sebastian Zietz (HAW) came in second behind Toledo and will move to the Quarterfinals, as well. Despite a broken board and a detour on land, Zietz was able to find a 16.13 to oust 2015 WSL Champion Adriano de Souza (BRA).

“I am just trying to rest and eat healthy and pay attention to the water,” said Toledo. “Even when you feel like you are not doing anything, it is just that psychological feeling that gets you tired. After this heat, and especially the 9.50 that I got, my legs were burning with so many turns. I am sad for Adriano (de Souza). I am just trying to keep the consistency.”

Kanoa Igarashi (JPN) went big in his Round 4 matchup to defeat 2014 WSL Champion Gabriel Medina (BRA) and rookie standout Griffin Colapinto (USA). The surfer representing Japan unleashed his aggressive approach to score a near-perfect 9.67 and take the highest heat total of the event so far, an 18.04 (out of a possible 20). Despite losing to Igarashi, Medina will still advance to the Quarterfinals by earning second, but Colapinto’s third forces him to leave the competition early.

Owen Wright (AUS) withdrew from the competition today due to a severe cold. His withdrawal from Round 3 Heat 9 gave Zietz the walk-through win to Round 4 Heat 3.

The WSL Commissioner’s Office will reconvene tomorrow morning to reassess conditions and make the next call.

Forecast partner of the WSL, is calling for:

Medium size, overlapping SW to SSW swells will move in Tuesday and Wednesday with generally favorable wind. A larger SW to SSW swell should build through Thursday afternoon before fading on Friday. A partially to heavily shadowed and modest size WSW/SW swell looks increasingly likely for the 8th-9th, although wind may be onshore.