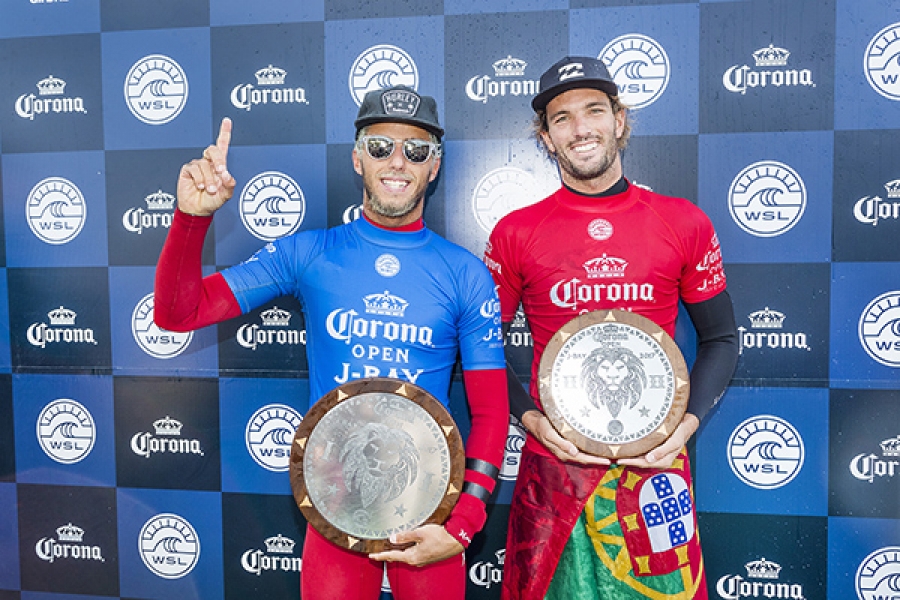 Stop No. 6 of 11 on the 2017 Championship Tour was graced with flawless conditions, resulting in barrier-breaking performances by the world’s best surfers, eight perfect 10-point rides and no shortage of drama.

Toledo, who was responsible for two of these Perfect 10s, showcased a new level to his progressive approach and will be rewarded with a boost from 14th to 7th on the Jeep Leaderboard. Today’s result also marks the Brazilian superstar’s best finish of the season to reboot his 2017 World Title campaign.

“I can’t believe it,” said Toledo. “J-Bay is always a contest that’s been my dream to win. To surf perfect waves like this that we did the entire contest. I’ve got to thank god for the amazing week that we’ve had. I’ve got my entire family here and supporting me. It’s unbelievable and I’m speechless. I think I might leave my hair like this for the rest of the year.”

Toledo’s fourth CT win did not come easy as a stacked field of competitors put the 22-year-old to task in each round. Toledo previously dispatched local favorite Jordy Smith (ZAF) in the Quarterfinals with two impressive 9-point rides and then eliminated Julian Wilson (AUS) in the Semifinals.

“It has been an amazing week,” Toledo said. “This is definitely going to be the competition I remember for forty or fifty years, not just because I won but because of the level of surfing during this whole week. With J-Bay, the perfect waves and the level of surfing, it was perfect. Thank you to my crew that has supported me. I want to thank my wife and my daughter who have been here all week supporting me.” 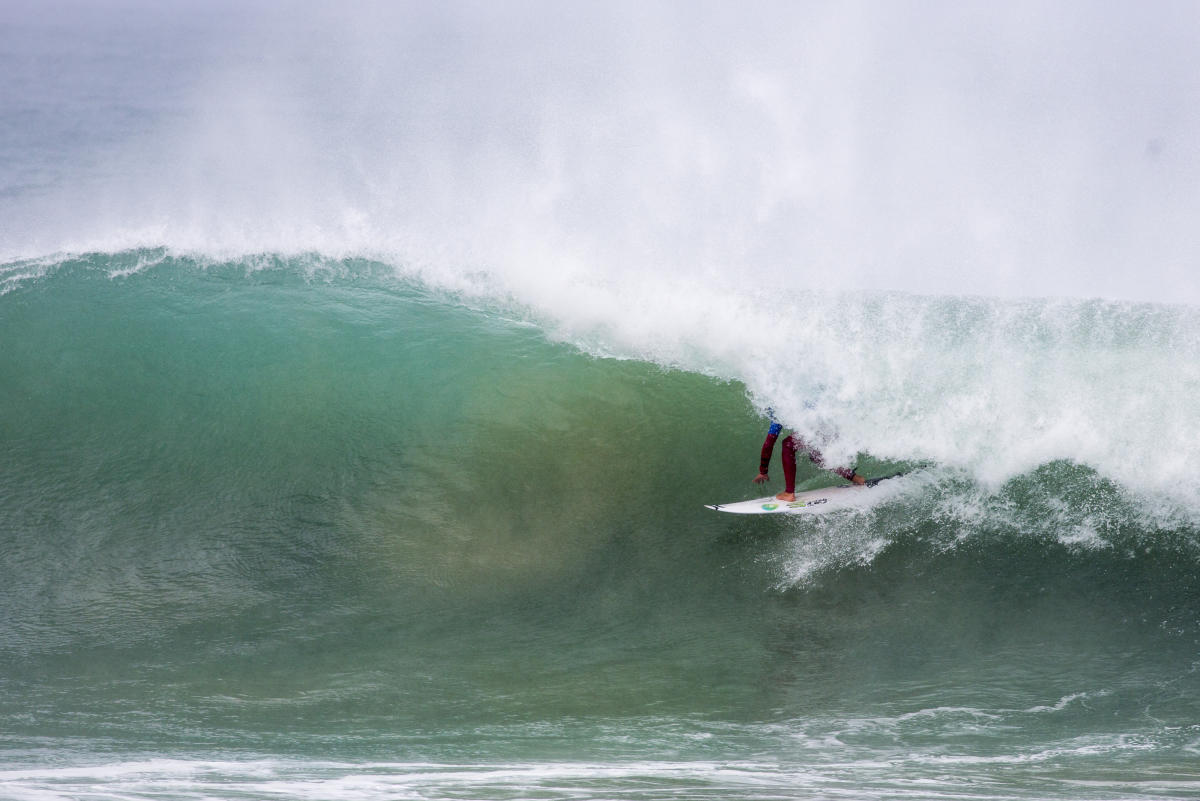 The intense Final saw exciting exchanges between the Toledo and Morais. The two progressive challengers continued to deliver excellent-range scores for the J-Bay crowd, both escaping big barrels and unleashing big carves. With ten minutes left on the clock, another set provided both surfers an opportunity to improve their scores. Morais locked in a near-perfect 9.40 to close the gap to just 0.27 points on Toledo’s 18.00 two-wave total. Toledo attempted to improve his scoreline, but left priority with Morais for the remaining two minutes of the heat. Morais was not able to meet the requirement, giving Toledo the win.

Despite losing to Toledo in the Final, Morais delivered phenomenal surfing throughout his first CT event in South Africa. The rookie previously stunned the competition with a Perfect 10 to defeat reigning WSL Champion John John Florence (HAW) in the Quarterfinals, before eliminating 2015 WSL Champion Gabriel Medina (BRA) in the Semifinals. Morais’ career-best finish will now move him up from World No. 18 to 12th on the Jeep Leaderboard.

“I just love this place, it is amazing,” Morais said. “Everyone is so nice, the waves are amazing, the weather is really similar to home, and the vibe that you feel here is crazy good. It is an unforgettable place. Thank you to everyone for watching and supporting us. First Final ever on the World Tour and it is amazing.

“Surfing against John (Florence), Mick (Fanning), Adriano (de Souza), Gabriel (Medina), Filipe (Toledo) was a crazy week,” continued Morais. “It is always a big challenge and you have to step up your game when you are against those guys. They are the best surfers in the world and World Champs and if you want to beat them you have to be prepared for everything. It is amazing to represent Portugal and be the first Portuguese surfer doing a Final on the World Tour. Thank you to everyone at home.” 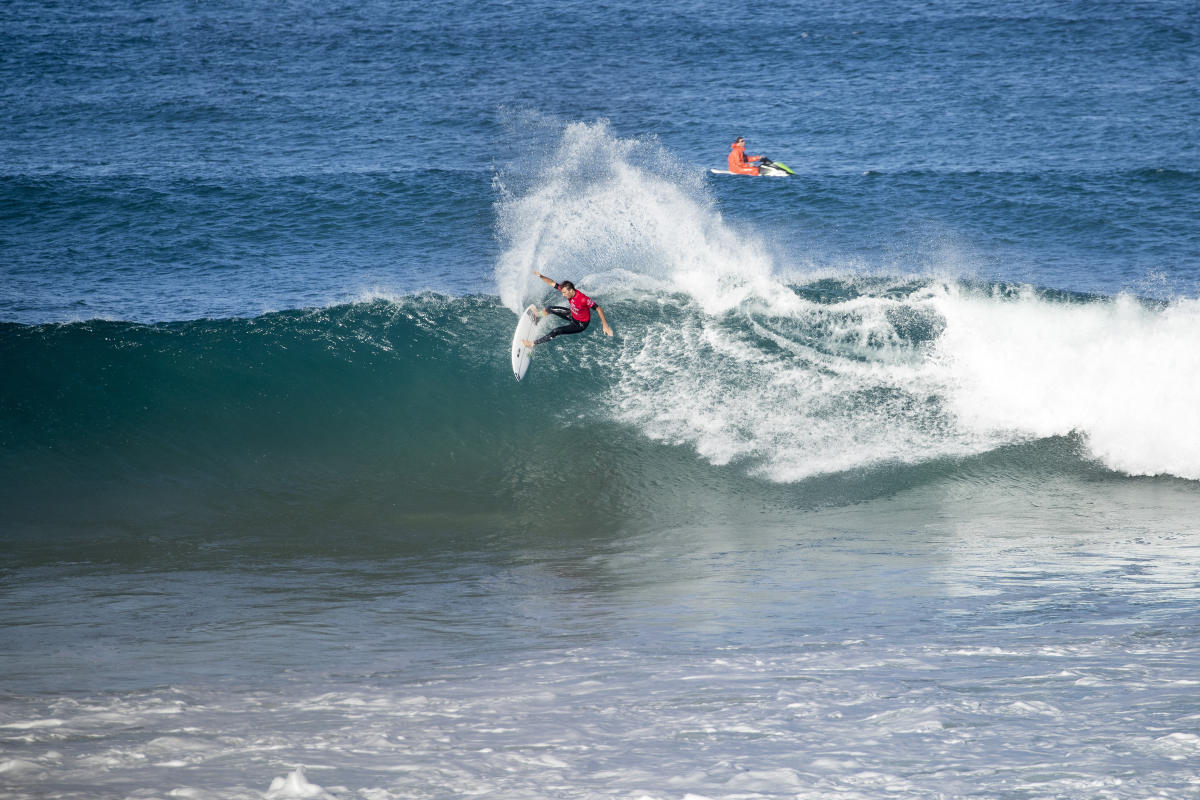 Caption: Frederico Morais (PRT) claimed his best-ever result on the CT by advancing on to the Final of the Corona Open J-Bay.
Credit: © WSL / Cestari

2015 WSL Champion Gabriel Medina (BRA) was dispatched by runner-up Morais in the Semifinals after the rookie posted two excellent-range scores. Today’s result is Medina’s first Semifinal berth since Quiksilver Pro Gold Coast and his career-best result at this event (previously earned 5th place finishes in 2014, 2015, 2016). Previously at No. 11 on the Jeep Leaderboard, the Brazilian moves to 9th.

Julian Wilson (AUS) secured his best result of 2017 with a Semifinal berth today where he was defeated by Toledo. Wilson had a great run during the event including a Perfect 10 in Round 3 and remains at 8th on the Jeep Leaderboard.

Current Jeep Ratings Leader Matt Wilkinson (AUS) was defeated by Semifinalist Wilson in the last Quarterfinal match-up. Despite his 5th place result in South Africa, Wilkinson will retain the Jeep Leader Jersey heading into the next CT stop, the Billabong Pro Tahiti.

“I started that heat and I fell on one really good wave that put me out of rhythm, but I am stoked that I came back to nearly take the heat,” Wilkinson said. “To watch all the guys that were in the race for this event dropping 9s and 10s, and to be the last guy left was pretty nice. To surf against Jules (Julian Wilson) in pumping waves is awesome. I will probably go to Teahupo’o to practice if there is a swell. I am excited to go back and hopefully get pumping waves.”

Two-time event winner Jordy Smith (ZAF) was eliminated in the Quarterfinals by Toledo and the 5th place finish (his third of the season) will see the South African remain at No. 3 on the rankings. It was an incredible event for Smith who posted a Perfect 20-point heat in Round 3 and another Perfect 10 in Round 5.

“This comp has had some amazing points for me and some where I’ve struggled, but overall I’m proud of myself and I stood tall between those moments and dealt with them,” Smith said. “Filipe (Toledo) surfed great in that last heat and he definitely got better waves than I did and that’s really the difference out there. I’m just really, really tired. Yesterday was just a big day for me. I just want to thank Jeffreys Bay for all the support and everybody that came down, it really meant a lot and I really appreciate that. I learn every time when I come here. There’s a lot of pressure because everybody wants me to do well and I want to do well you just have to take each heat for what it is. The year really starts now and Tahiti is next so I’m focused on that now and we’ll see where that puts me.”