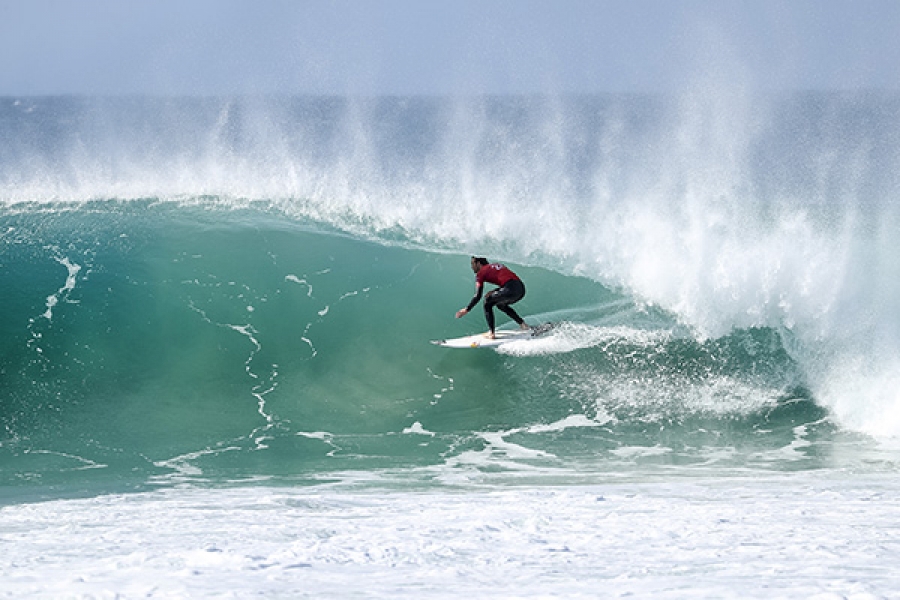 A sensational day of action played out at the Corona Open J-Bay, stop No. 6 on the 2017 World Surf League (WSL) Championship Tour (CT), and the world’s best surfers delivered four perfect 10-point rides.

Competition ran through Round 3 and the opening two heats of Round 4 in epic 8 - 10 foot wave faces at Jeffreys Bay. 12 surfers were eliminated from the competition in Round 3 and the remaining 12 battled through incredible conditions in Round 4 for a direct advance to the Quarterfinals.

The two-time event winner (2010 and 2011) and current No. 3 on the Jeep Leaderboard Jordy Smith (ZAF) from South Africa posted a PERFECT 20 heat total in his Round 3 match-up with 2017 WSL Rookie Leonardo Fioravanti (ITA). This is only the 10th time the feat has been achieved in 40-plus years of professional surfing, the first time anyone has earned a Perfect 20 at J-Bay and the first ever perfect heat for Smith. Despite a strong opening from Fioravanti, the hometown hero found the best waves of the heat to deliver two perfect rides. First Smith laid down two huge turns and a deep barrel for 10 points followed quickly by a display of his incredible power surfing and two more barrels for another Perfect 10 to seal his victory and his place in the history books.

“It feels absolutely phenomenal,” said Smith. “Just be to here at J-Bay where the waves are firing and to have that opportunity is incredible. My first two heats were really slow and to get blessed with that was absolutely amazing. There’s more waves on offer so I definitely hope there’s more in the tank. You go out there and give it absolutely everything you’ve got. I don’t want to take anything away from Leo (Fioravanti), he’s an absolutely amazing surfer especially on the rail so I just had to try and do my best surfing. This heat I was just fortunate to get the bombs. I couldn’t believe it and I was really fortunate to get that. I never in my wildest dreams thought I would get a Perfect 20 and to get it here at J-Bay makes it extra special.” 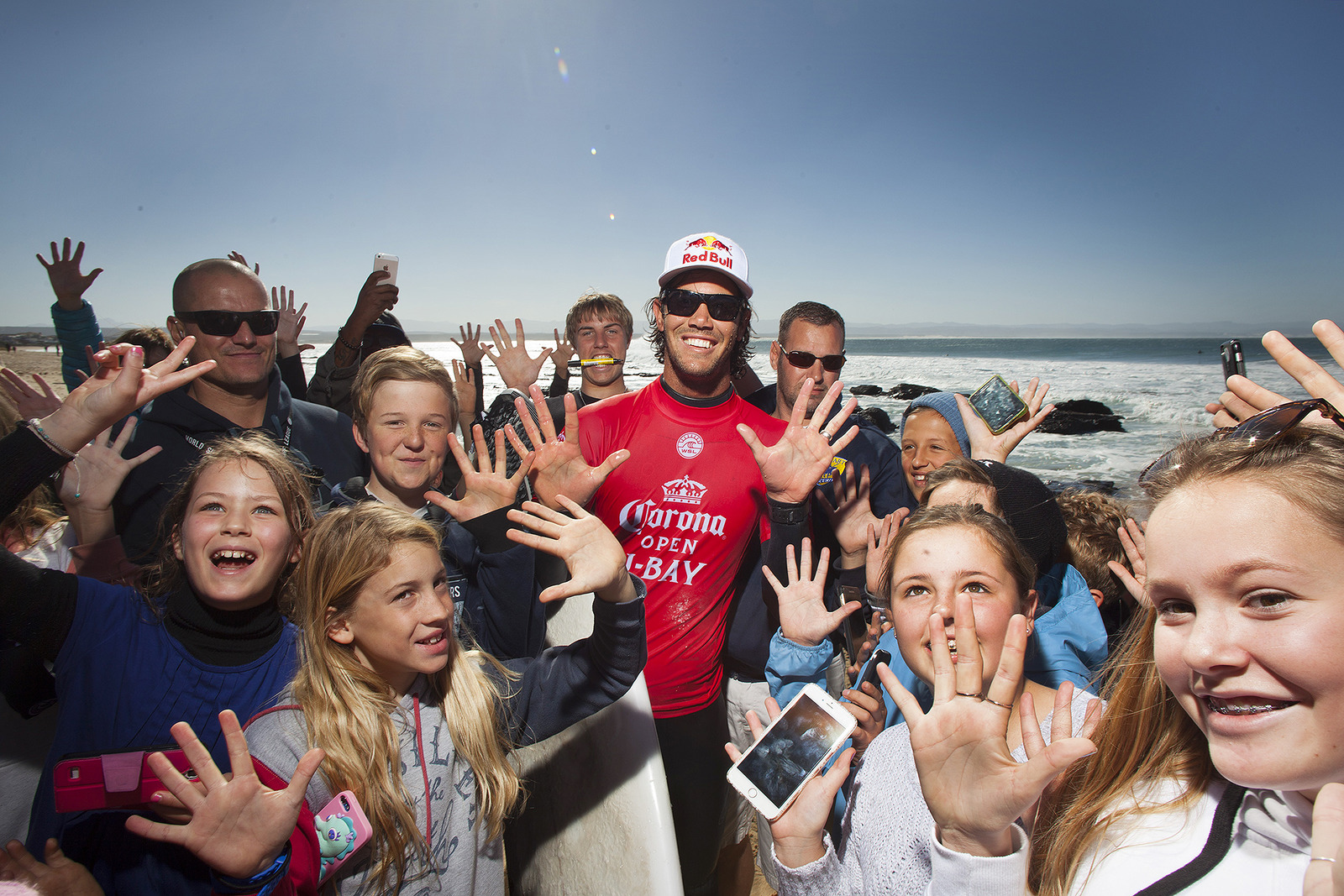 “The waves were perfect and it was a great heat,” said Fioravanti. “I knew two 8’s weren’t going to cut it. Every time we had an exchange he always seemed to get the edge even though. Jordy Smith is one of the best out there so I just went out there trying to surf my best but he got two 10’s and made history out there. It’s such an incredible place so we’re so lucky to be here. That was the best heat I’ve ever surfed so I’m stoked to be part of it. I can’t wait to get over to Tahiti now.”

An unbelievable clash played out in Heat 2 of Round 4 between reigning WSL Champion John John Florence (HAW), three-time WSL Champion Mick Fanning (AUS) and Frederico Morais (PRT). The rookie opened with a near-perfect 9.60 for an early lead but Florence stormed into first place with his first Perfect 10 of the year. Morais came back with another big score, a 9.47, and reclaimed the top spot while the four-time event winner put on a clinic and locked in an excellent 9.73 to get himself back in the heat. The two world champions could not better their scores and the rookie won the heat and claimed his place in the Quarterfinals. Fanning and Florence will surf again in Round 5 when competition resumes.

“It was probably the best heat of my life against Mick (Fanning) and John (Florence),” Morais said. “It can’t get any better than that with John getting a 10, me with two nines and Mick was ripping too. The last two heats I didn’t feel like I was surfing my best so I knew I had to give everything and be perfect in this round and that’s what I did. Finally I feel like I’ve been doing my real surfing.” 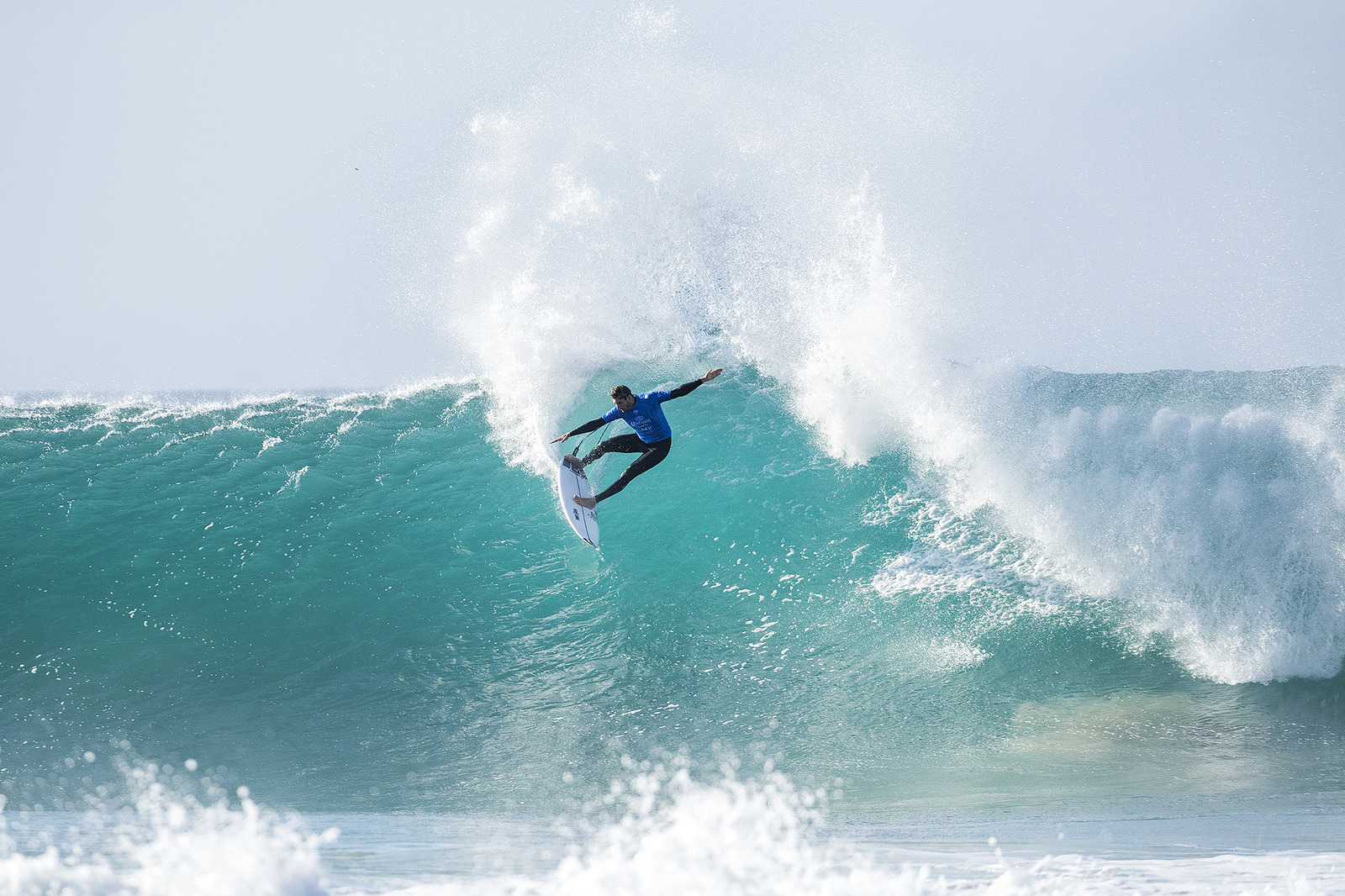 2014 WSL Champion Gabriel Medina (BRA) battled Owen Wright (AUS) and 2017 WSL Rookie Joan Duru (FRA) in the Round 4 Heat 1 in an all goofy affair. Wright was the first surfer to go into the excellent range but Duru, looking to break into the Quarterfinals for the second time season, stole the advantage. After a slow start Medina found two barrels and a series of incredible turns for a 9.07 and the lead. Duru continued to hunt down the 8.91 required but a big ride in the final minutes of the heat fell short and the Brazilian took the heat win with an excellent 9.67. Wright and Duru will surf again in Round 5.

“I’ve been surfing a lot recently to try out my boards,” said Medina. “It’s a bit tricky out there but when you find it, it's so good. I knew it was going to be a tough heat against Owen (Wright) and Joan (Duru) so I’m really happy. I tried to be patient and was trying to pick the good ones, which is hard. Every wave is really good so it’s hard. It’s the best feeling when you finish your last turn and you know it was a good wave.”

Rookie Duru previously caused a big upset in Round 3 when he put a serious dent in Adriano de Souza’s (BRA) title campaign and eliminated the Brazilian in a rematch of their 2012 Qualifying Series final at Jeffreys Bay. Both of the surfers had plenty of opportunities, but it was Duru who found two solid seven-point scores that the 2015 WSL Champion was not able to match and he is sent home in 13th place.

“I was pretty nervous because I lost to Adriano (de Souza) like this five years ago here,” said Duru. “I got lucky this time and the waves are pumping to it’s going to be a crazy day.”

Earlier in the day Round 3 saw it’s share of big scores with Julian Wilson (AUS) posting a Perfect 10 of his own in his heat against Jeremy Flores (FRA). The Australian, currently in 8th place on the Jeep Leaderboard, is yet to make it past the Quarterfinals this season and today’s third round victory is a step in the right direction.

“What a magic week, that was such a beautiful wave,” said Wilson. "It was such a nice feeling the way the wave lined up for me. I felt like I had a pretty good read on the conditions out there and there’s room for me to improve so I’m just going to focus on my own game.”

Conner Coffin (USA) also delivered big scores and posted two excellent nine-point rides in the opening 20 minutes of his Round 3 heat to eliminate 2012 WSL Champion Joel Parkinson (AUS) from the competition. The two-time event winner and current No. 6 on the Jeep Leaderboard was left in a combination situation and is sent home with his second 13th place finish of the year.

“It doesn’t get any better than this,” Coffin said. “That was unreal I was just so exciting. I love surfing against those guys. Parko (Joel Parkinson ) is one of the best surfers out there so it awesome to have a heat with him. We both love surfing this wave more than any other on the planet so it was a really fun heat. I’m so happy to be here and having so much fun, it’s a dream come true.”

No. 1 on the Jeep Leaderboard, Matt Wilkinson (AUS), also made it through Round 3 by defeating Jack Freestone (AUS) in in Heat 12 with a 16.54 heat total.

“That’s a pretty scary round because it’s the difference between a result and a throwaway,” said Wilkinson. “It’s really intense being in the last heat of the day because I’ve been watching all day, which was tough. Jack (Freestone) is a great surfer and anyone on their forehand is a danger out there so I knew I would stick to big turns. The waves are just so good and I’m stoked to get to go back out there.”

Only two rookies remain in the draw after Fioravanti, Connor O’Leary (AUS) and Ezekial Lau (HAW) failed to make it through elimination Round 3. Duru will surf again in Round 5 against Fanning for his chance to join Morais in the Quarterfinals.

Heat 3 of Round 4 was called off following a shark breach that was part of a larger feeding activity that was going on and, per protocol, the response team was activated and the heat was called off.

“Judges and ski drivers saw a shark breach about 100 yards out the back of the lineup so the heat was put on hold and we’ve made the decision that we’re not going to restart the heat again today,” said WSL Commissioner Kieren Perrow. “We’ll come back tomorrow and we’ve still got great waves on tap so there’s no need to put that heat back in the water again today.”

Event organizers will reconvene tomorrow morning at 7 a.m. local time to assess conditions and make the next call.