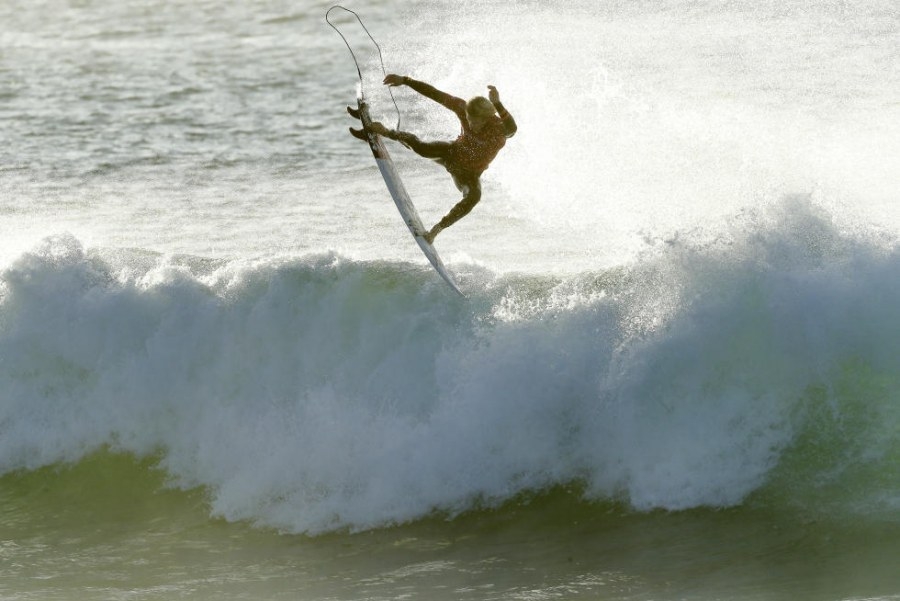 It was Florence who edged the win by just 0.20 and secured his place in the Semifinals for the first time at the J-Bay Open...

John John Florence (HAW), current No. 3 on the Jeep Leaderboard, battled two-time J-Bay Open winner Jordy Smith (ZAF). Following a heat restart, Smith claimed a solid lead early in the heat with a 6.33. Florence went on to take to the air and was rewarded with a 7.33 and the advantage. A set in the final minutes saw both surfers find a small back-up score. It was Florence who edged the win by just 0.20 and secured his place in the Semifinals for the first time at the J-Bay Open.

“Everything was close in that heat,” said Florence. “Before the competition started there was just set after set after set. It had definitely gotten smaller so we really had to adjust to the conditions. It was tough out there so I’m really stoked to make it through. We were both waiting for sets -- there were a lot of mid-sized waves coming through but I was waiting for a bomb. It was scary in those last couple of minutes and you really start overthinking it. That was definitely my favorite 3.37 ever! I’m just being positive and happy that I’m still in it and will be working on adjusting everything for these new conditions. I’m stoked to be in the Semifinals.”

“The conditions definitely are not the best,” Smith said. “There were some waves before but the charts showed that it’s going to get more windy throughout the day. Unfortunately, these kinds of things happen and you cannot do too much about them. I am super bummed out as I would have like to have had some clean, open walls and a better battle. But that is why we love surfing, for these kinds of reasons. Hopefully I can get the bump on the next one.”

Following the conclusion of Quarterfinal 1 the decision was made to put the competition on hold and ultimately call if off for the day as conditions deteriorated and winds rapidly increased.

“It’s tough out there,” said WSL Commissioner Kieren Perrow. “It was looking good but we’ve just seen the ocean shut down and the wind is really blowing in so we’re going to call it off and come back and reassess tomorrow. Forecast is looking interesting for next week and there’s some potential for the end of the window, which is looking better than what we’ve got currently.”

Surfline, official forecaster for the World Surf League, are calling for:

Fun to mid size SSW swell trends down through the day on Sunday, strongest in the morning. Onshore flow builds through the day. Fading and smaller surf is expected Mon/Tue, with a modest SW swell possible Wed/Thur along with onshore to sideshore wind. There is at least some potential for a larger swell over the final weekend of the waiting period, although we’re low confidence on specific details.