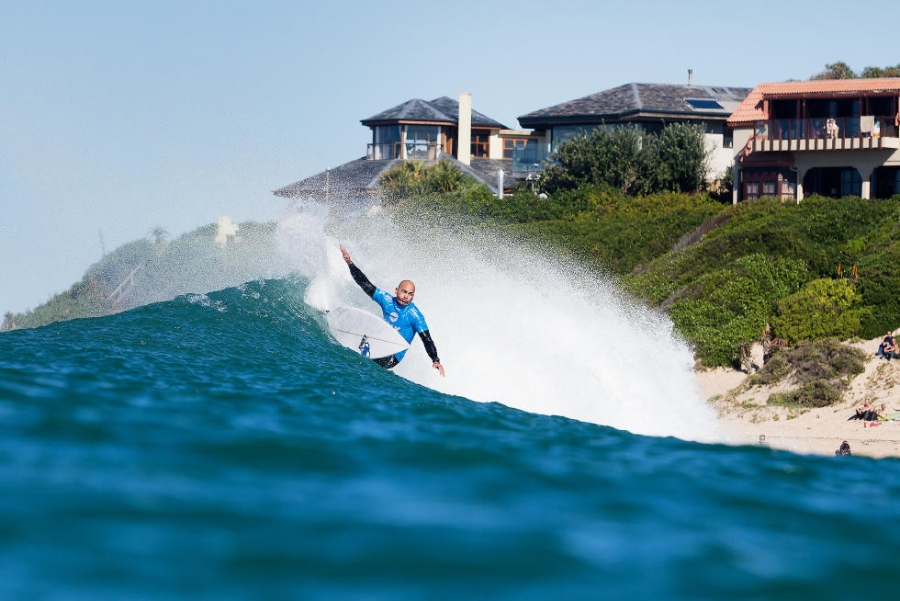 Will Kelly Slater keep his momentum this event? WSL / Cestari

The world’s best surfers have converged in South Africa ahead of the start of the J-Bay Open this 6 July.

Stop No. 6 on the 2016 Samsung Galaxy World Surf League (WSL) Championship Tour (CT) holds a competitive window of July 6 - 17, 2016 and is the only CT stop on the African continent. The acclaimed righthander of Supertubes at Jeffreys Bay will play host to the WSL Top 34, recommencing the 2016 WSL title race.

Jeep Leaderboard frontrunner Matt Wilkinson (AUS) will lead field after an impressive start to 2016, including wins at the opening two events of the year as well as a runner-up finish in Fiji. Wilkinson heads into the event wearing the Jeep leader jersey and will take onDavey Cathels (AUS) and Steven Sawyer (ZAF) in Round 1 of competition.

“It’s feeling pretty good to be the rankings leader and it’s a better pressure to be feeling than the pressure to requalify,” Wilkinson said. “I’ve been doing some QS events and to win in Newcastle was an amazing start to the year. It’s just got better and better from there -- now we’re halfway through the year and it’s still going great. It’s probably time that a goofyfooter won this event and I feel like my surfing really fits here.”

Reigning WSL Champion Adriano de Souza (BRA) has made the Quarterfinals at the J-Bay Open six times in the past and is hoping for a Semifinal berth this year. Currently in fifth place on the Jeep Leaderboard, De Souza will match-up against Josh Kerr (AUS) and Kai Otton (AUS) in the opening round of competition.

“I’ve had so much fun surfing this event over the last ten years,” said De Souza. “I would really like to move on past the Quarterfinals this year. After the World Title I feel like some of the pressure is off. I was here last week when the swell was cranking and I’m just so happy to be here. This year I feel so free and I’m really hoping for some good waves. I’m sitting in the top five and am very happy with my position at the moment.”

Jordy Smith (ZAF), two-time winner of the J-Bay Open (2010, 2011) and the only South African on the CT, will return to the event this season injury free. Smith’s 2015 campaign was derailed by a significant back injury that saw him finish 25th before withdrawing from competition for most of the year. Smith will face Wiggolly Dantas (BRA) and Adam Melling (AUS) in Round 1 of competition.

“I’m feeling 100 percent better than last year,” said Smith. “I’ve gathered some of my fondest memories here at Jeffreys Bay so it’s a really special place for me. I’m thankful that the WSL has come back and we get the opportunity to surf this wave. I’ve been surfing in front of friends and family my entire life so I feel like it’s a big bonus for me rather than added pressure.”

John John Florence (HAW) is currently in third place on the Jeep Leaderboard, just 100 points behind 2014 WSL Champion Gabriel Medina (BRA). Florence was absent from the J-Bay Open last year due to injury and will be looking to better his 13th-place finish in Jeffreys Bay in 2014 and close the gap on Medina. Florence will take on Kanoa Igarashi (USA) and Keanu Asing (HAW) in Round 1.

“I’ve been feeling really good this year and taking it event by event,” said Florence. “I’m really stoked that we are back here -- I missed out on the event last year so I hope we get some good waves. I’ve been coming here since I was a little kid. This year I came here early and really focused on surfing this wave. It’s such a perfect wave but there are some little tricks that I’m trying to figure out. I’m feeling confident and looking forward to it.”
Steven Sawyer (ZAF), winner of the Local Trials, and Dusty Payne (HAW) have been allocated wildcards into the J-Bay Open.

Owen Wright (AUS) and Bede Durbidge (AUS) remain out with injury and have been replaced by Adam Melling (AUS) and Stuart Kennedy (AUS).
When competition commences, up first will be Mick Fanning (AUS), Conner Coffin (USA)and Alejo Muniz (BRA) in the opening heat of Round 1.

Surfline, official forecaster for the World Surf League, are calling for:  Medium size SW swell mix prevails Wednesday along with very strong offshore flow, before trending down Thursday and into Friday morning as wind eases significantly. A potentially larger SW swell could move in for the weekend of the 9th-10th, although wind conditions do look more problematic with at least some periods of onshore flow. At this point the early to middle part of next week looks pretty slow, with some fun to possibly mid size SW swell around the last three days of the waiting period.