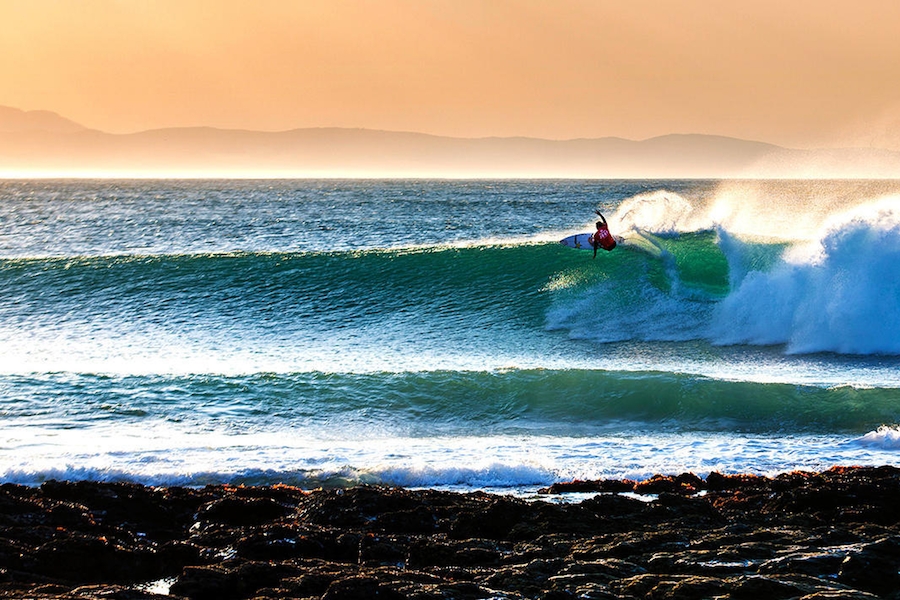 The beauty of Jeffreys line up WSL

The next exciting stop of the WSL Tour 2016.

Jeffreys Bay is located just off the N2 Highway, making it an easy drive from the airport and other Cape attractions like Cape St. Francis (made famous by the 1966 documentary The Endless Summer). Public roads are well developed and directions are easy to spot so, if you don't have an international driver's license, a car hire is the best way to experience the whole of the Eastern Cape.

THE WAVE: The speed at J-Bay is what makes the wave so technical and difficult to master. But when you find that perfect takeoff spot and drop into a bomb, it sets up a potential 300-meter wave. If you haven't been, it's a good idea to watch some experts tackle it first before heading out. Former World Champ Shaun Tomson's approach: "I start at the top at the Boneyard section, a very fast, hollow section. Then you can drop through to the main break at Supertubes where you get a super-fast, down-the-line wall. Then into Impossibles, where the really good tubes are. If you make it through the Impossibles section, then you can go all the way down to the point."


Surfing J-Bay
The J-Bay Open features a racing righthander, a challenge even for the world's best. Check out what some of the top CT surfers said about surfing J-Bay ahead of last year's event.
APRÈS SURF: Away from Supertubes, Jeffreys is home to a unique on-land surfing pilgrimage. The Surf Museum, located in the Sunshine Cost region, boasts everything from old newspaper clippings tracing the history of the sport to surfboards lined up to show the progression of shaping techniques. The event is also close to a number of nature reserves, many of which offer safaris. If you're feeling daring, head to the Bloukrans Bridge, the highest commercial natural bungee jump in the world.


NOTABLE: Unknown to most who saw the 1966 documentary The Endless Summer, Mike Hynson and Robert August caught a lot more rides at Jeffreys than they did at the "perfect" break of St. Francis Bay. Jeffreys is known for a quality righthand pointbreak, one of the best in the world, that pumps with unparalleled consistency. Smooth barrels can break as long as 300 meters before the wave closes out.

CHAMPIONSHIP TOUR HISTORY: After a two-year hiatus from the CT, Jeffreys Bay was back on the Championship Tour in 2014. Jordy Smith  has claimed home-break advantage, winning the event back-to-back in 2010 and 2011. Smith, now the lone South African on Tour, will face the added pressure to please the crowd on the beach. Last year, he was forced to withdraw with a back injury.


Local Legend
Jordy Smith came out firing at the 2014 event, earning a 9.80 and this 10 during Round 1.
J-Bay has had its share of emotional moments. Smith's first win there in 2010 bolstered his confidence (after the tears had dried) and helped him on his way to a second-place overall finish behind Kelly Slater. The event has staged some big upsets with two underdog wildcards taking the event -- Sean "The Nemesis" Holmes in 2010 and Joel Parkinson in 1999. Of course, nothing compares to the drama and show of brotherhood at last year's event, when competitors embraced Mick Fanning and Julian Wilson after pro surfing's first in-contest shark encounter.